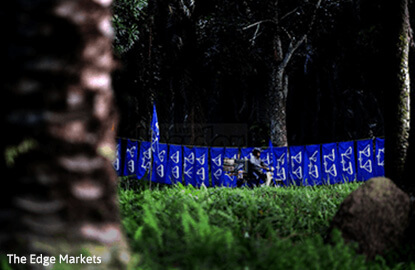 +A
This article first appeared in The Edge Financial Daily, on August 11, 2016.

“I think Barisan Nasional will call for an election very soon,” he said at a press conference yesterday, after launching his book entitled Frankly Speaking.

“Most of them (leaders of the new party) are experienced enough to be an effective opposition group.

“But the reality of politics may make it very difficult and challenging in view of the time factor, meaning before they can even come to agreement on the first item of the agenda, the election is already happening, which means [Prime Minister Datuk Seri] Najib [Razak] has already beaten them in terms of time,” he added.

Musa said he is sceptical whether the new party, Parti Pribumi Bersatu Malaysia (Bersatu), will be able to succeed, saying it would have to form a cohesive coalition with the opposition to win in the election, and that poses various problems.

He said, based on past experience, having an unanimous political stand on issues, strategies and vision for the country had been a challenge for the opposition.

“I would have to assume that if they want to be successful, they have to get together with the opposition. I’m told they have been talking to each other.

“Past experience shows that to become a cohesive force is a challenge in itself,” he added.

He said for Bersatu and the opposition to hold majority power in a parliamentary system, they need to win the election, which depends on unanimous decisions on seat allocation.

“To win the election, they must be able to allocate seats. They must be unanimous in their allocation of seats.

“Most of the time in the past, it had never worked,” he added.

However, he said, the formation of Bersatu is positive for democracy, and the impact of Bersatu can only be ascertained once the election is held.

“I like the two-party system. If there is a party strong enough to call themselves [the] opposition, I think it’s good for the country because checks and balances in the parliamentary system are essential to make the government really represent the people,” he added.

Bersatu was registered with the Registrar of Societies on Tuesday, with Dr Mahathir serving as chairman, Muhyiddin as president and Dr Mahathir’s son, Datuk Seri Mukhriz Mahathir, as vice president.

Muhyiddin reportedly said “the party is inclusive in nature, progressive and open-minded”, with full membership open to bumiputeras, while non-bumiputeras can be associate members.

Associate members are not allowed to vote or contest for party positions, but can be appointed to key posts.

Bumiputeras include Malays, natives from Sabah and Sarawak, and Orang Asli groups.

The party was formed after Muhyiddin and Mukhriz were sacked from Umno for questioning Najib’s leadership over the 1Malaysia Development Bhd scandal, and is expected to comprise former Umno members.