Malaysia
World
Corporate
From The Edge

‘M’sia moving downhill, up to leadership to act’ 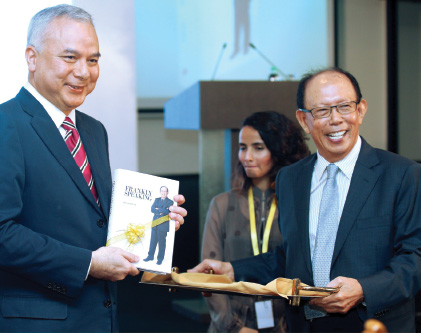 Sultan Nazrin (left) and Musa at the official launch of book ‘ Frankly Speaking’ by the former DPM. Photo by Suhaimi Yusuf

+A
This article first appeared in The Edge Financial Daily, on August 11, 2016.

KUALA LUMPUR: Malaysia is moving downhill and it is up to the leadership of the country to stop the fall, former deputy prime minister (DPM) Tun Musa Hitam said yesterday.

“I think the country is moving downhill, to put it bluntly,” he said. “The speed is slow, but it could develop into sliding fast.”

“Young girls are beginning to carry all these repellents. It means that we are worried, uncertain; we have no confidence in agencies related to administering the country,” he added at a press conference after the launch of his book entitled Frankly Speaking.

Commenting on Malaysia’s state of affairs, he said the country is bedraggled with discomforting “new normal”, and it resembles the Philippines when it was previously heading towards being a failed state.

“There are too many ‘new normals’ in the country,” he said. “Every other day, somebody is robbed in broad daylight, shootings.”

He said his visits to the Philippines in the past made him conclude that it was heading towards a failed state fast, but Benigno Aquino III’s leadership thwarted the country’s downward spiral.

“I would go there ... shooting was normal, robbery was normal,” he said. Normal, above-average people had to go around with bodyguards. And the richer ones had bulletproof cars.

“Luckily, he (Aquino) grabbed Philippines and put it up a little bit. Three years after he took over, things changed. The growth rate was one of the things Southeast Asia was proud off and still might be,” said Musa.

Musa also noted that Malaysia’s government is distracted by the 1Malaysia Development Bhd (1MDB) scandal, and many issues affecting Malaysians.

Asked if he speaks to Prime Minister Datuk Seri Najib Razak about the country’s state of affairs, Musa said he does and is straightforward about it.

“Yes, I have conversations with him on the current situation. When I talk to him, I talk to him. I don’t go and praise him,” he said. “I would like to think that is how it should be, but that is not how it is,” he said.

However, he declined to reveal details of the conversations, saying it serves no purpose to air it out in public.

“I don’t think I would serve any purpose if I start boasting [publicly] to everybody that I’m telling off Najib,” he said.

Musa said he is not surprised by calls for Najib to step down, and the government should allow dissidents to air their views without being penalised, including by permitting the planned Bersih 5.0 rally.

“If Bersih is coming up, you could mess it up or make it successful, as long as you allow and let them express their views, [and] as long as you don’t use this as excuses to lock people up.

“People know, this is one of the oldest tricks in the books. So these are the things that need a lot of fine-tuning in terms of attitude of those in power.

“Those in power are the ones who are going to determine the immediate future of the country,” he said.

His book Frankly Speaking details his years as a young boy growing up in Johor Baru to the halls of power, and the violence between police and villagers in Memali, Kedah which he dubbed “the biggest black mark on my political career.”

In his speech, Musa said his political career was cut short by his penchant for being forthright.

The former Umno deputy president said he was too straightforward with “his boss” Dr Mahathir, which ultimately resulted in Musa leaving politics permanently.

“My experience tells me that telling the truth and being straightforward and frank are almost certain to get you nowhere upwards in politics.

“To frankly express my views and to frankly speak my mind, I thought, would help us uplift our performance in government. But alas, it was not to be,” he said.

In hindsight, Musa said, albeit tongue-in-cheek, it was sheer political “stupidity” to behave that way throughout his tenure as DPM.

“It was indeed based on the fundamental assumption of the principle dictum that two heads are better than one.

“At that time, I should have stuck to one motto: one head is best for everyone,” he said.

Musa also lamented the current political situation, saying it is based on the principle of “you are either with us or against us.”

“The current political situation in our country is so fraught with so much discord, so much hatred even,” he said. “Us and them is common in the conduct of politics and very disturbing.”

The book was launched by the Sultan of Perak Sultan Nazrin Muizzuddin Shah, who commended Musa for being a politician who stood by his principles.