‘Merger will go through with or without EPF’ 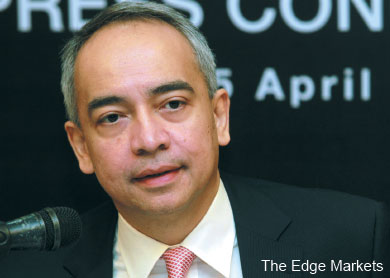 “We are very confident that once we put the business case to the shareholders meeting, we will get the endorsement of shareholders. We think we will get it through with or without EPF,” Nazir told pressmen yesterday at the launch of the second set of Lifting the Barriers (LTB) reports by the Asean Business Club Delegation and CIMB Asean Research Institute (CARI).

He was asked if the decision by Bursa Malaysia to bar EPF from voting on the merger would jeopardise the deal, and if there had been objections from major stakeholders like Abu Dhabi-based Aabar Investments PJS.

Nazir also expressed optimism that when the merger happens, it “will stand on its own merits, so whoever can vote will be able to consider it”.

Bursa in October barred the EPF from voting on the mega merger. The EPF is the single-largest shareholder of RHBCap with a 41.5% stake, as well as of MBSB with a 64.6% stake. The fund is also a substantial shareholder of CIMB, with a 14.6% interest.

Without EPF’s vote, the fate of the merger may now hinge on key shareholder Aabar Investments which owns 21% of RHB and wants a higher price for its stake.

Nazir said he forsees no delays for the three banks to finalise the structure of the merged entity by the first quarter of next year.

He has given assurance that the merger is still on schedule and is progressing into its next phase which is the due-diligence and synergies processes.

“We are very confident that if we get through this period of due-diligence — and also putting together the financial logic of the merger — it would be compelling enough that it does not really matter who can or cannot vote,” he said.

What is fundamental to the assessment of the merger is the value of the result of the entity itself, Nazir said, noting that the main merger does not involve any cash but a share swap.

“So we decided that we have to go out and convince [shareholders] that we have to put two or three entities together and out of it will become a business that will create a greater value than what it is today,” he added.

To recap, Bursa’s 10-man listing committee on Oct 21 ruled that the EPF cannot vote on the mega merger as the pension fund is a common major shareholder of all the three financial institutions, giving rise to a potential conflict of interest. RHB and MBSB, each at EPF’s behest, submitted an appeal to Bursa to reconsider the decision on Oct 31.

Bursa’s appeals committee was to have met last Friday to deliberate on the appeal, but The Edge weekly (the Dec 1-7 issue) reported, quoting sources, that the meeting had been postponed.

This article first appeared in The Edge Financial Daily, on December 2, 2014.