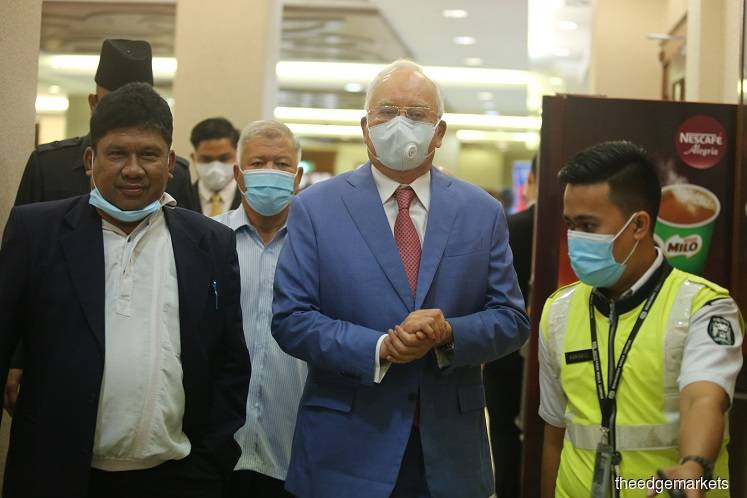 These photos were taken by Mohd Suhaimi Mohamed Yusuf and Sam Fong (6 photos). Najib's counsel Tan Sri Muhammad Shafee Abdullah objected to the amendments made by the prosecution and pointed out that the prosecution yesterday had said there was simply a "typographical error only relating to one word", although the amended document received by the defence today showed otherwise.

"The thrust of my cross-examinations thus far with Tan Sri Ambrin Buang and Tan Sri Ali Hamsa was that there is never anything wrong with requesting to amend an audit report that has not been finalised," said the lawyer.

Meanwhile, Sri Ram said the prosecution had initially thought it could just amend one word in the charge, although the prosecution later realised that the sentence had to be amended to make it clearer.

"Based on the evidence from Tan Sri Ambrin, Nor Salwani and Saadatul Nafisah, our case has always been the same. As far as we are concerned, there is no significant change to the charge," Sri Ram told the court.

However, he told the court that the prosecution does not have any objection against arguing the matter next Wednesday.

Justice Mohamed Zaini Mazlan said he would be more than happy to give time to the defence and went on to vacate the trial dates for today and tomorrow.

Sri Ram asked for the defence to pass their submissions to the prosecution not later than next Monday.

"Monday? There goes your weekend," said the judge to the defence.

"I'll fix June 24th for submissions. I will also endeavour to deliver my decision on the same day," added Zaini.

The court also fixed further dates for the trial, namely Oct 12-16 and Dec 7-10; however, the October dates will depend on Justice Collin Lawrence Sequerah's agreement to vacate the dates for the 1MDB-Tanore trial.

Both of them were charged under Section 23(1) of the Malaysian Anti-Corruption Commission Act 2009, which provides a jail term of up to 20 years and a fine of no less than five times the amount of gratification or RM10,000, whichever is higher, upon conviction.