An AI for an eye 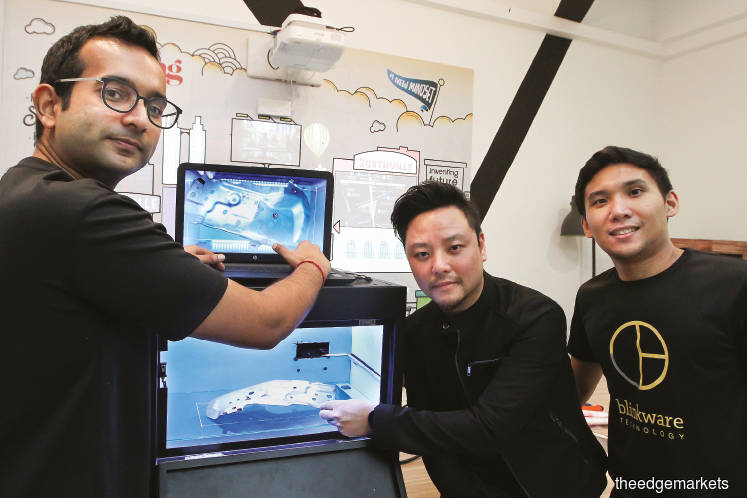 Addressable market: US$111 billion of potential value in Asean and US$628 billion globally (as at 2017)

Industry challenges: A lack of funds and willingness of manufacturers to invest in Industry 4.0

When Alvin Koh started Blinkware Technology Sdn Bhd in 2013, he was looking at motion and gesture technology, which allows you to use a physical movement to initiate a response from hardware such as using a simple hand gesture to turn on a radio, as a way to improve the quality of life for people with disabilities.

But the company would have to make money. So, he looked at a mass market application — digital screens with 3D cameras that would allow people to control their advertising using hand gestures. “By closing your fist and raising your hand, you could move to the next advertisement,” says Koh.

At the time, there was a lot of digital advertising, but they served as mere distractions because the advertisements did not “do” anything, he adds. “You would see credit card ads on screens, but nothing was reaching out to the audience. With a motion control system, as soon as someone walks past, the body tracking happens and it reacts to you specifically.”

Other companies only started to use this technology in 2016.

Blinkware spent no more than RM100,000 in its first year of operation and by the following year, it was already profitable.

But projects were taking too long and costing too much. To generate cash flow, Koh looked at the possibility of selling software tools and introduced a software development kit that allowed programmers to use its motion and gesture libraries to create new technologies.

Blinkware dove deep into the optical space. But it soon realised that 3D cameras — which could cost anything from US$500 to US$50,000 — were a bit of a barrier to the adoption of its software. So, it created software specifically for 2D web cameras, which cost about US$50 and were starting to have more advanced features.

That was when things became interesting. “In 2016, we were approached by a tier-one assembler of Japanese automotive vehicles in Malaysia. They said they had seen our detection ability and object recognition technology. But could we do it for quality control systems?” says Koh.

The assembler asked him whether Blinkware could come up with a visual inspection unit for car parts using the much more cost-effective 2D cameras. “In a span of six months, we created our first artificial intelligence (AI) visual inspection system. It was the first time we really delved into AI,” he says.

This was a new area for the company and it needed capital to go into the technology. It managed to raise US$2 million at the end of 2016. That was when Dimishtra Sittampalam came on board as an investor and

director and Arafat Azwar became a strategic adviser on Industry 4.0 and dealing with government agencies.

The US$2 million allowed Blinkware to hire experienced programmers. “We started moving into specific types of programming — machine learning and deep learning — which are core functions of AI,” says Koh.

The focus on cost is crucial, especially for small and medium enterprises. Speaking to many factory owners, the company learnt that cost and complication were two main reasons these businesses were reluctant to adopt Industry 4.0.

Koh says when Blinkware deployed its system for the automotive vehicle assembler, it started to learn about Industry 4.0. “We did quality inspection on their car parts. At the time, they were visually checking the housing component, which is the massive front end of the car.

“We did analysis and defect control on the housing component, looking at 41 child parts and 8 possible areas of defects, including missing holes and welding spots as well as rust precisioning.”

Blinkware customised the solution. “One of the key aspects of our business is that we customise a lot of solutions. There are a lot of off-the-shelf products that you buy that are very expensive to customise,” says Koh.

Arafat says, “I think the rule of thumb with cars is that out of 1,000 parts, they test a random sample of one. Blinkware’s software allows you to test all 1,000.”

model on the same day, we will not know why one car goes into the workshop every three months while the other is perfectly fine. It is because of this [random testing].”

Koh interjects, “Each of those components were checked through random sampling and it took them 45 minutes to check one part. They had to release 300 parts a day. So, they started hiring more workers, but the defect rate was 20% to 25%.

“Whenever a part is rejected by the automotive principal, the cost is on the tier-one assembler. So, they were bleeding money and did not have any solutions.”

With Blinkware’s solution, the assembler was able to reduce the time it took to do the defect analysis to less than 25 seconds and bring the defect rate down to 5%.

But it was not enough to develop solutions in obscurity and Blinkware could not rely on word of mouth to promote its business. So, Koh started putting himself out there. “I spoke at a few conferences and customers started noticing us. We found that this was a huge space we could move into,” he says.

Blinkware soon caught the attention of big companies such as Bosch and Fujitsu, which approached Koh and his team. “Our collaborations with these companies were very much about bringing accessible and affordable technology to their customers,” he says.

The company is working closely with Fujitsu to expand across Southeast Asia. So far, the Japanese technology giant has brought Blinkware’s solutions to the Philippine, Indonesian and Thai markets. Meanwhile, Bosch — one of the pioneers of Industry 4.0 — is helping the company grow its Malaysian market.

Koh says having partnerships with global companies allows Blinkware to expand more quickly and leverage technical support globally. “These guys are teaching us new technologies. We are transferring knowledge as well as producing new technologies together.”

Dimishtra points out that visual inspection technology is not something new. “If you were a manufacturer that wanted to implement automated visual inspection technology, you would go to one of these guys and they would say you have to buy a 3D camera with the system, which would cost you a few million ringgit. However, we would come in and say, for most of the things, a 2D camera would suffice.”

The affordability factor has been a major driver of Blinkware’s growth. “Factories need to see a quick return on investment. I think many companies have had trouble adopting Industry 4.0 because the cost is too high. They are looking at a six-month payback. But which system can give you that?” asks Koh.

Apparently, Blinkware can. “We are hitting a six-month payback now. Sometimes, it is only three months, depending on the size and intricacy of the system. That has allowed us to expand beyond Malaysia and into other markets,” he says.

In Malaysia, manufacturing is still the killer application when it comes to AI. “It generates the most in terms of payback,” says Koh.

But most companies only look at the “sexy” parts of AI — facial recognition, surveillance, smart cities and smart controls. “They are not looking to see that manufacturing is the area that benefits the most from automation and AI deployment. So, no one is really doing what we do. And that is why we have gone really deep into that vertical and continue to garner so much business —because manufacturers are really trying to be highly productive at the lowest cost,” he says.

Blinkware is currently undertaking its Series B funding round. “The capital we are raising is to help us grow our infrastructure, in particular, to hire more programmers and allow us to start servicing other countries. We are looking to raise RM8 million to RM10 million, which is not a lot of money, but we do not need more than that,” says Koh.

“We are trying to keep equity dilution to a minimum,” Dimishtra quips.

Koh says the company has pivoted three to four times in its six years of existence. “Yet, the roots of what we are and my passion to really simplify things and give people with illnesses or disabilities quality of life through technology … that is still a calling. I saw what my dad went through with Parkinson’s disease and if this technology had been available for him to do simple things, he would have had a much better quality of life before he died.”