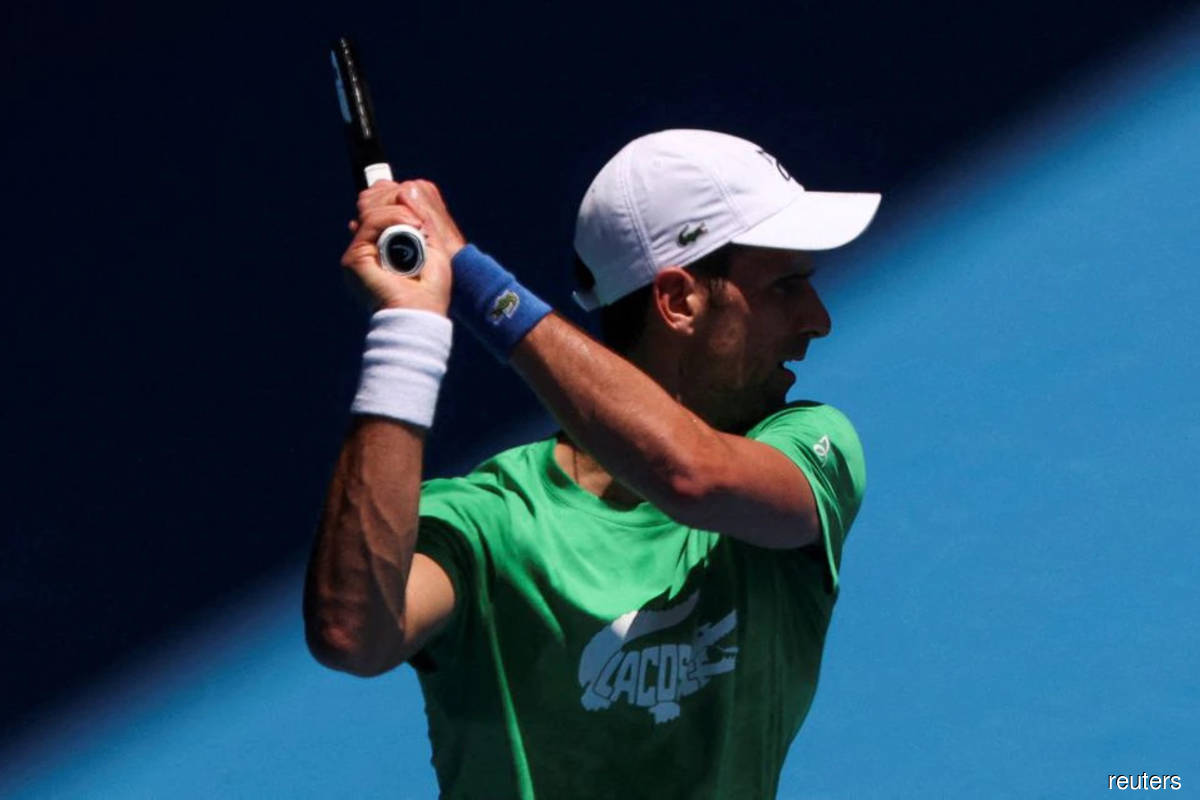 Serbian tennis player Novak Djokovic practises at Melbourne Park as questions remain over the legal battle regarding his visa to play in the Australian Open in Melbourne, Australia, Jan 13, 2022.

MELBOURNE (Jan 14): Australia cancelled Novak Djokovic's visa for a second time on Friday saying the world tennis number one who has not been vaccinated for Covid-19 may pose a health risk, effectively ending his bid for a record 21st Grand Slam title at the Australian Open.

Immigration Minister Alex Hawke used discretionary powers to again cancel Djokovic's visa, after a court quashed an earlier revocation and released him from immigration detention on Monday. It was not clear if he would be returned to detention.

"Today I exercised my power under section 133C(3) of the Migration Act to cancel the visa held by Mr Novak Djokovic on health and good order grounds, on the basis that it was in the public interest to do so," Hawke said in a statement.

Under the section of the Migration Act used to cancel the visa, Djokovic would not be able to secure a visa to Australia for three years, except in compelling circumstances that affect Australia's interest.

The decision to again cancel his visa over Covid-19 entry regulations raises the prospect of a possible second court battle by the Serbian tennis star to be allowed to stay and play in the Open starting Monday.

A source close to Djokovic's team confirmed that he is considering the decision and weighing his options.

The controversy has assumed an importance that goes beyond tennis: it has intensified a global debate over the rights of the unvaccinated and become a tricky political issue for Prime Minister Scott Morrison as he campaigns for an election that is due by May.

While Morrison's government has won support at home for its tough stance on border security during the pandemic, it has not escaped criticism over the botched handling of Djokovic's visa.

"Australians have made many sacrifices during this pandemic, and they rightly expect the result of those sacrifices to be protected," Morrison said in a statement.

"This is what the minister is doing in taking this action today. Our strong border protection policies have kept Australians safe," he said. "Due to the expected ongoing legal proceedings, I will be not be providing any further comment."

Djokovic, 34, the Australian Open defending champion, was included in the draw as top seed and was due to face fellow Serb Miomir Kecmanovic for his opening match next week.

A relaxed looking Djokovic practised his serves and returns with his entourage on an empty court at Melbourne Park earlier on Friday, occasionally resting in a chair to wipe sweat from his face.

Djokovic, a vaccine sceptic, fuelled widespread anger in Australia when he announced last week he was heading to Melbourne with a medical exemption to requirements for visitors to be inoculated against Covid-19.

On arrival, Australian Border Force decided his exemption was invalid and put him in an immigration detention hotel alongside asylum-seekers for several days.

Hawke said he had carefully considered information from Djokovic and Australian authorities, adding the government was "firmly committed to protecting Australia's borders, particularly in relation to the Covid-19 pandemic".

Australia has endured some of the world's longest lockdowns, has a 90% vaccination rate among adults, and has seen a runaway Omicron outbreak bring nearly a million cases in the last two weeks.

"No-one really thought they could come to Australia unvaccinated and not having to follow the protocols," Tsitsipas said in an interview with India's WION news channel.

An online poll by the News Corp media group found that 83% favoured the government trying to deport the tennis star.

Opposition Labour leader Anthony Albanese said: "It should never have come to this ... how is it that that visa was granted in the first place if he wasn't eligible because he wasn't fully vaccinated."

Anti-vaxxers have hailed him as a hero while Djokovic's family and the Serbian government have portrayed him as a victim of persecution.

Djokovic's cause was not helped by a wrong entry declaration, where a box was ticked stating he had not travelled abroad in the two weeks before leaving for Australia.

In fact, he had travelled between Spain and Serbia.

Djokovic blamed the error on his agent and acknowledged he also should not have done an interview and photoshoot for a French newspaper on Dec 18 while infected with Covid-19.

Former senior immigration official Abul Rizvi told Reuters ahead of the decision that the Migration Act section was only acted on in "extreme circumstances".

"I can't remember an example of when a minister used this, it is rare ... and would put a three-year ban on his re-entry to Australia."