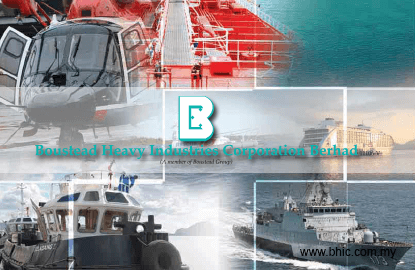 In a filing with Bursa Malaysia today, BHIC attributed the lower earnings to lower contribution from its defence-related MRO activities and higher operating costs largely due to unfavourable foreign exchange (forex) rate translations for the rollover of the group's foreign currency-denominated borrowings for the period.

"The chartering segment's performance was dampened by unrealised forex losses resulting from the group's foreign currency-denominated borrowings to purchase the Chulan tankers in prior years," it said.

"The associate company Boustead Naval Shipyard Sdn Bhd's results were also affected in the period due to a provision for foreseeable loss made for the restoration of KD Perantau following the incident in November last year," it added.

BHIC executive deputy chairman and managing director Tan Sri Ahmad Ramli Mohd Nor said it has been a challenging period for the group as its earnings were affected by unfavourable forex rate fluctuations, apart from the prudent provisions made by the associate.

"Moving forward, the group expects to finish the current financial year on a positive note, with heavy engineering continuing to be the strongest segment, boosted by the performance of current MRO projects.

"The group expects the O&G sector to remain challenging in view of the present competitive environment and capital expenditure cuts as announced by oil majors," he said in a statement today.

BHIC's counter was not traded today. With its previous close of RM2.29, the group's market capitalisation stands at RM569 million.