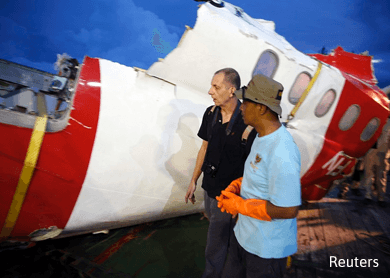 (Jan 12): Indonesian divers yesterday found the black box of the AirAsia plane which crashed in the Java Sea a fortnight ago with 162 people aboard, the Transport Ministry said.

But they failed to retrieve it because it was stuck under debris from the main body of the plane, it added.

The recorders were at a depth of 30m to 32m, he said in a statement.

Divers will tomorrow try to shift the position of the wreckage to access the black box.

"However, if this effort fails, then the team will lift part of the main body using the same balloon technique used earlier to lift the tail," Tonny added.

After a frustrating two-week search often hampered by bad weather, officials earlier today raised hopes by reporting that strong ping signals had been detected by three vessels involved in the search.

Those signals were coming from the seabed less than 1km from where the tail of the plane was found, Malaysian Navy chief Tan Sri Abdul Aziz Jaafar said in a post on Twitter. Malaysia's Navy is helping in the search.

The Indonesian meteorological agency has said stormy weather likely caused the Airbus A320-200 to crash as it flew from the Indonesian city of Surabaya to Singapore on December 28.

But a definitive answer is impossible without the black box, which should contain the pilots' final words as well as various flight data.