BOJ expected to pull back from stimulus, maybe as early as this year 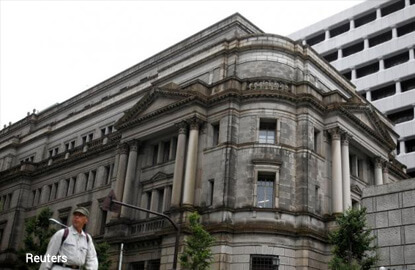 TOKYO (March 14): The Bank of Japan's next move will be to start phasing out its ultra-easy monetary policy, according to a majority of economists polled by Reuters in a dramatic turnaround of expectations from just two months ago.

The BOJ will signal a move away from its accommodative policy by raising the 10-year Japanese Government bond yield target, which it currently wants to keep at around zero, a majority of economists in the latest poll said.

Views have changed amid growing expectations for inflation in Japan, a rosier outlook on the global economy and more stable oil prices.

Also, mounting expectations for interest rate hikes by the U.S. Federal Reserve have buoyed the dollar against the yen, making Japan's export sector more competitive and reducing the need for further stimulus by the BOJ.

"Core consumer prices could rise to around 1% in August at the earliest, or in September to October. And the outlook for the economy is positive. In this circumstance, the BOJ is expected to make an adjustment to its long-term yield target," said Yuichiro Nagai, economist at Barclays Securities Japan.

"We project the BOJ will raise its long-term yield target in the July-September period. And in response to the supply-demand in the bond market, the BOJ is likely to trim its bond buying," he said.

The BOJ is widely expected to keep policy unchanged at a meeting this week as it waits for more data to show a pick-up in inflation, according to a separate poll.

But 28 of 35 economists polled said they expect the central bank's next move will be to start pulling back its stimulus steps.

Eight analysts forecast the central bank would do so in 2019 or later.

Asked what steps the BOJ would take if it decides to start exiting from its stimulus policy, 25 analysts said it would first raise the 10-year Japanese government bond yield target.

Five said it would raise its minus 0.1% interest rate on some excess bank reserves. This question allowed multiple answers.

However, if the yen spikes, the central bank may ease again.

"In case of sudden sharp rises in the yen, which could damage Japan's economy and prices, the BOJ could take easing steps," said Takeshi Minami, chief economist at Norinchukin Research Institute.

Economists predicted that the world's third-largest economy will grow 1.2 percent in the fiscal year starting in April and 1.0% in fiscal 2018, in line with the February survey.

Core consumer prices, which include oil products but excludes volatile fresh food prices, will rise 0.8% and 1.0% respectively, unchanged from the previous survey and still only half-way to the BOJ's 2 percent inflation goal.

The latest official data showed core CPI rose 0.1% in January from a year ago, the first increase since December 2015.

All but one economist polled predicted wage increases at the annual spring negotiations will rise at the same pace as last year or lower. Last year, workers' base pay raise was around 0.4%.

"Manufacturers are cautious about the U.S. administration's trade policy, which may hurt an environment for exports. While financial institutions' earnings are weighed down by minus interest rates," said Minami at Norinchukin Research Institute.

"The economy is not bad but the surrounding environment for some industries are uncertain."

The yen was trading around 114.80 yen per dollar on Tuesday, after it weakened to around 118.60 yen early this year.