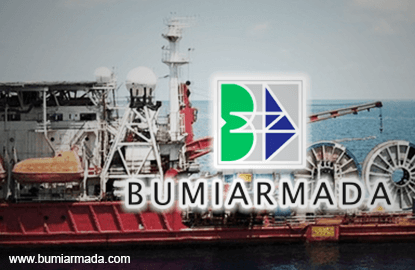 Even so, AllianceDBS Research in its evening edition yesterday said the stock is likely to move lower again with immediate support seen at 75 sen.

In a note on Monday, Alliance DBS said Bumi Armada continued to trade below the 20-day and 50-day moving average lines.

“The downside gap indicated the urgency to unload stock positions. Following the down close on March 7, the stock is likely to move lower again with immediate support seen at 75 sen.

“A fall below 75 sen should see further price decline to the subsequent support at 70 sen. The hurdle is pegged at 90 sen. A rise above 90 sen would lift the stock to the next resistance at 95 sen,” it said.

Meanwhile, oil and gas counters bucked losses on the FBM KLCI which fell 5.50 points to 1,692.43 points, to extend gains from rises in Brent crude oil that climbed above US$40 per barrel on output slowdown since December last year.

At the same time, Sumatec Resources Berhad rose half sen or 4.35% to 12 sen with 33.8 million shares done, giving it a market capitalisation of RM422.09 million.

KNM Group Bhd went up half sen or 1.05% to 48 sen with 8.48 million shares changing hands that saw market capitalisation of RM1.02 billion.

In a note today, Affin Hwang IB Bhd said sentiments related to crude oil prices improved further as Brent hit an intraday high of US$41 in the last trading session.

“Stocks in Bursa Malaysia are anticipated to trend higher this week on the back of improved domestic fundamentals, steady crude oil recovery and stronger ringgit,” Affin Hwang said.

According to Bloomberg yesterday, Brent crude rose above $40 for the first time since December as major producers prepared to meet to discuss a production freeze and U.S. output finally showed signs of declining.

Earlier today, Reuters reported that US West Texas Intermediate (WTI) crude futures grew to US$38.11 per barrel, its highest since early January.