Business Of Sports: Why football’s king is now a pawn in bigger games 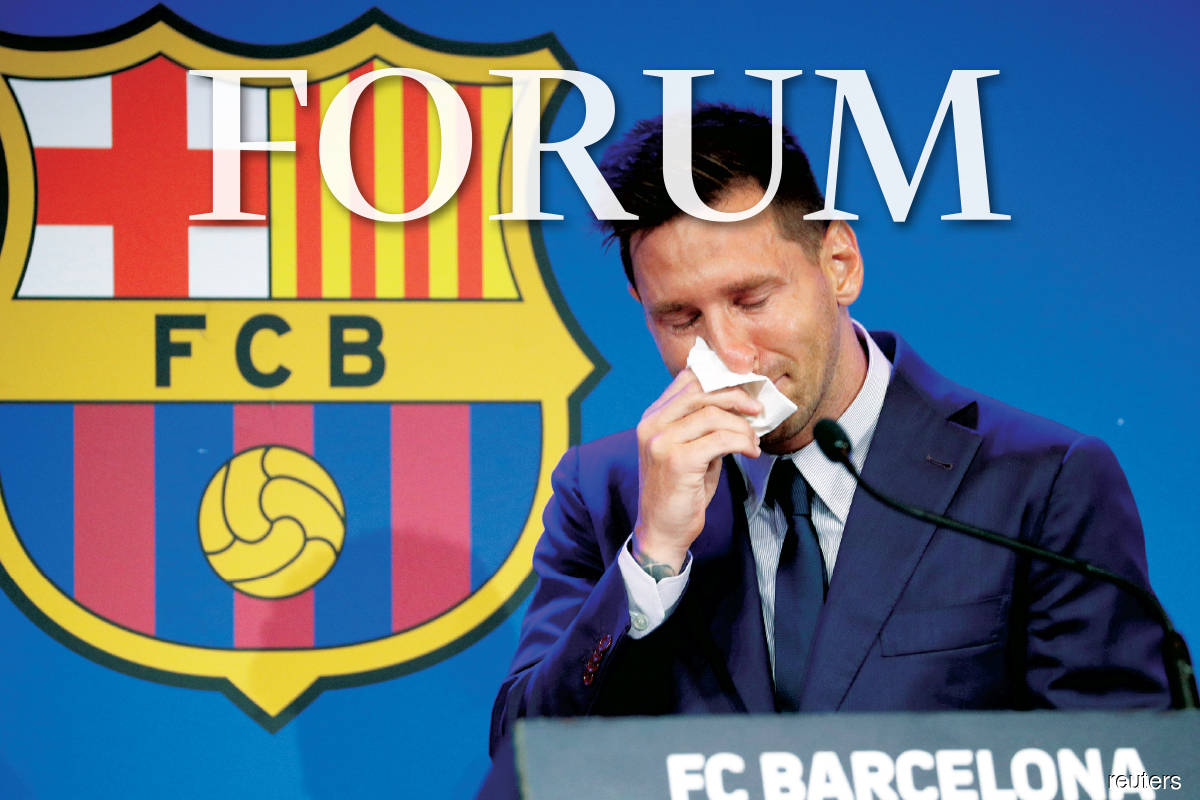 Messi’s tears at leaving Barcelona brought into perfect focus the £1 billion morass the club had sunk into, and which triggered his departure

They were the tears of a king the moment he knew his reign was over, his realm collapsing. If a picture is worth 1,000 words, the shot of Lionel Messi’s tears at leaving Barcelona brought into perfect focus the £1 billion morass the club had sunk into, and which triggered his departure. Nor was he the only one crying — the game itself was shedding buckets as its king was about to become a pawn in power games on two continents.

Sacrificed by Spain as the undead European Super League (ESL) shows vital signs of becoming a threat to Uefa itself, Messi’s capture by Paris Saint-Germain (PSG) has struck a decisive blow in the ongoing proxy war in the Gulf. And like an airport thriller, the two plots are intertwined, with PSG pivotal in both.

If Barcelona was the love of the Argentine’s life, PSG is the madam into whose arms he has been driven. Unlike the proud symbol of Catalonia that is owned by the fans, the Paris club, founded in 1970, had little history and, for some four decades, even less love from a city famously snooty about football.

But since it was taken over by Qatari Sports Investments (QSI) in 2011, its fortunes have been transformed. More than £1 billion worth of oil and gas money has been pumped in and it now dominates France’s domestic game. But it is also a shameless vehicle for sports-washing and soft power for a distant speck in the desert. Messi, one of the game’s immortals, is being used to launder the reputation of a state still infamous for human rights abuses!

That said, when he had to find a club to match his ambitions, he had fewer choices than Hobson. PSG was able to stump up wages of £25 million a year and, with ex-Barcelona pal Neymar among its stars, it offered his best shot at a fifth Champions League trophy. The only rival, Abu Dhabi-owned Manchester City, had already committed £250 million for two alternative acquisitions, one of which is now in doubt. Too late: Qatar 1, UAE 0.

Getting Messi on board is a stunning piece of one-upmanship in the ongoing shenanigans of Gulf politics. A détente has been declared in the simmering feud between Qatar and the Saudi/UAE coalition, but no quarter is given when it comes to bragging rights. And with Qatar hosting the World Cup next year, Messi and his teammates can expect a bit of overtime — selling the tournament.

As the country prepares to take centre stage, there’s plenty of work to do on its image vis-à-vis climate change and human rights. As the world’s largest producer of liquefied natural gas, it’s hard for it not to be seen as a major contributor to carbon emissions.

But when it made headlines in March, it was because of its treatment of migrant workers. A Guardian investigation claimed a staggering 6,500 had died during the construction of the World Cup stadiums. Attitudes to freedom of expression and LBGTQ+ issues have also come under heavy fire.

It’s a textbook example of sports-washing — a diversionary tactic. Eventually, the novelty wears off and the topic changes, but Messi’s genius — even though slightly fading — will ensure the conversation is about him for the foreseeable future.

Saudi Arabia wanted him and Cristiano Ronaldo to promote tourism but both politely declined. Saudi doesn’t have a Big League club to offer, but is desperate to promote itself as a hub in sports such as golf, motor racing and boxing. Nothing, though, will come close to Messi.

According to Chadwick, there is a bigger picture than just distracting attention. It is the national vision launched in 2008, which aimed to “transform Qatar into an advanced society capable of achieving sustainable development”. Sport, football in particular, is a key element. Clinching the World Cup hosting job two years later must have seemed like a lottery win on which they are gleefully capitalising.

Meanwhile, over in Europe’s corridors of power, it will not have gone unnoticed that Messi switched from one of the ESL’s three refuseniks to its most steadfast opponent. While many of Europe’s top clubs — including Barcelona — plotted a breakaway, PSG stood solidly by Uefa. And PSG president Nasser Al-Khelaifi was rewarded with the presidency of the European Club Association (ECA), which gives him a seat on Uefa’s executive council.

Thanks to Uefa permitting “specific Covid-19 adjustments”, there are no more worries about Financial Fair Play. And the EPL big boys seem to be a league of their own already. Despite a season without fans, spending in the transfer window is pushing £1 billion, and more than the leagues in Italy, Germany and Spain combined.

Still funding it are broadcasting rights and the next overseas deal is set to rise well above the current £4 billion over 2019/22. And herein lies the real reason Real Madrid’s president won’t give up on the ESL. Ex-Bayern Munich CEO Karl-Heinz Rummenigge explains: “The problem with Florentino Perez is that Premier League clubs gain three times more money from TV rights compared to clubs from Spain, Germany or France. The English have done very well; we have to admit it.” Perez may admit it, but he won’t accept it.

The Independent reports that Perez & Co have “complete confidence” they will win their legal case and “will want to do their own deals with private equity”. The paper adds: “Several sources say they are actively reviving it, to the point that figures within Uefa and the ECA are getting worried. Political sources say some of the figures involved in financially backing the original Super League plan were in London over the summer, as part of talks to restart the project.”

If we were surprised at the speed of the ESL’s collapse in April, we have to ask again how billionaires could be routed so easily by a bunch of boisterous fans? They beat a hasty retreat and said “sorry”, but it looks as if they haven’t given up. And if rumours are correct, the revived project could be a very different beast to its predecessor — a direct challenge to Uefa’s governance, the league being “a Trojan horse” for the overall concept.

The Independent has repeatedly been told of overtures to second-tier clubs to try to get them on board and there is growing confidence that it will happen. Enough for Messi to be sacrificed, it seems. Football may have celebrated too soon.