China learns it is easier to manipulate financial markets 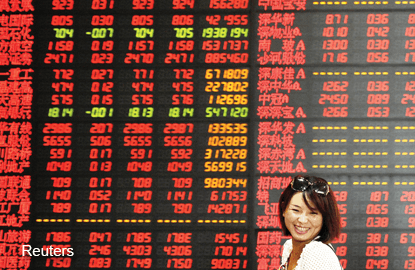 CHINA may be throwing its all at the stock market not because that is its most important problem, but it’s the one Beijing can most easily, if ham-handedly, control.

Intimidating short sellers is, after all, a lot easier, and cheaper, than breathing life into a sagging housing market suffering chronic (and worsening) oversupply.

Allowing people to pledge their houses as collateral for the purchase of more shares is easier than managing the transition from over-investment to, well, whatever comes after.

Suspending trading in major issues, trapping investors, is easier, and quicker, than addressing the ways in which pledged shares are part of the expanding web of indebtedness in China.

Chinese media reported last Friday that the state-run China Securities Finance Corp (CSF) had received 1.3 trillion yuan (RM796.52 billion) in loans from banks, money which in turn will be made available for stock-purchase loans through brokers.

Last week the CSF, not satisfied with rules that since last year have allowed brokers to issue short-term debt to fund margin loans for stock purchases, took the decision to allow those loans themselves to be securitised and sold to free up more capital for — yes that’s right — more margin loans.

All of this is most impressive, and though as policy it is deeply flawed and will have very high longer-term costs, in the shorter term it seems to be achieving something close to its aim. The Chinese stock market, if such it can still be called, has stabilised, with the Shanghai Composite Index closing last Friday at 3,957. That counts as an improvement, being up 13% from July’s lows, though down well over 20% from June’s peak.

But given the power China has put into the exercise, this hardly counts as a rousing success. Two weeks ago, 21 brokers, presumably under inducement from authorities, pledged to continue to buy shares until the Shanghai index regained 4,500. But it remains below 4,000.

China’s effort to control its stock market is best seen in the context of the difficulties it faces in controlling the rest of its economy, which
presents problems just as deep but requires solutions that may be much more difficult to engineer, or to endure.

“In our opinion, China’s combination of a triple bubble (with the third-biggest credit bubble, the biggest investment bubble and second-biggest real estate bubble of all time) remains the biggest risk to the global economy,” Credit Suisse strategists led by Andrew Garthwaite wrote in a note to clients.

Take housing. Despite falling prices and despite sky-high valuations, with Beijing and Shanghai buyers paying average prices that are more than 20 times average incomes, supply continues to flow unabated. Housing starts in China are running at 12% above demand, according to a Credit Suisse estimate, and 18% of completed homes become vacant.

It is not at all surprising that a housing bubble has gone hand-in-hand with a credit bubble, one that Credit Suisse calls the third-biggest they’ve seen, behind only Spain and Ireland during the last lamentable excess.

The ratio of private sector debt to gross domestic product is not only nearly 200%, but the rate of ascent has risen very steeply since 2011, taking it 40% above trend. Bank for International Settlements research has found that many financial crises are proceeded by credit rising by only 10% above trend.

Investment as a per cent of output is now running at 44%, compared with the peak of 36% in Japan in the early 1970s when it was rapidly industrialising. China recognises that investment-led growth is a process with a finite limit, and that its economy must transition into one with higher consumption and services as opposed to exports and the laying of concrete over ground.

Given the excesses in China’s economy, and the opaque but undoubted links between its banking system, its web of private, public and quasi-public debts and the stock market, a plunge must have been nothing short of terrifying for authorities. Debt-fault lines, as we’ve seen in other economies, run deeply but can cause much damage.

The reaction to the stock market crash may not be so much a matter of injured prestige, but of looking at the moving pieces and moving those over which China has most control.

James Saft is a Reuters columnist. The opinions expressed are his own.

This article first appeared in The Edge Financial Daily, on July 20, 2015.