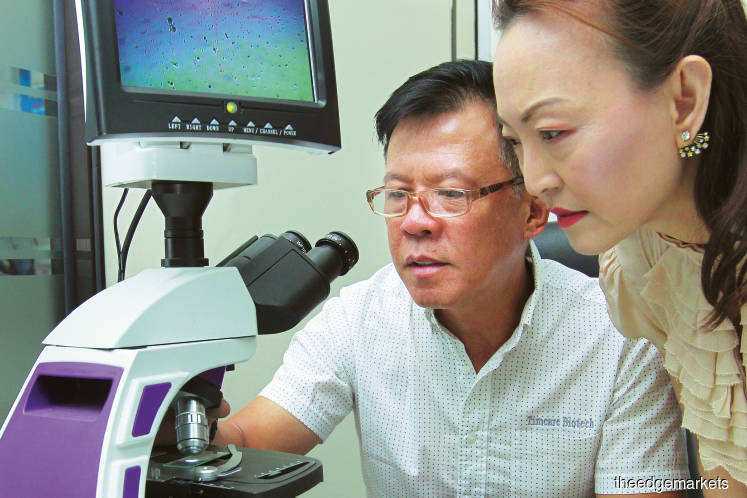 Product description and USP: Timcare Biotech comes up with enzyme-based solutions for a variety of environmental problems

Industry challenges: Getting institutional support for products and a lack of enforcement in terms of pollution-related regulations in Malaysia.

Timcare Biotech Sdn Bhd comes up with organic, natural solutions to grievous environmental problems such as the oil and sludge that flow into drains (and then our natural waterways) due to the presence of food waste or the massive pollution caused by aquaculture farming.

Husband and wife team Derek Cheong and Serene Sia started what was initially a chemical company dealing with timber care, but soon found that it was more interesting (and compelling) to address some of the problems they encountered in rural farms such as the stench from the dung of so many animals in close quarters being treated by harsh chemicals.

During their visits, they encountered university professors who were treating these problems with science — using enzymes to consume the dung, for instance — as part of the university’s corporate social responsibility projects. Surely, these simple, inexpensive and effective solutions would have a market in the wider world and address pollution in a better, more natural way than what was already available in the market.

Its first successful product using these methods was the Bionic Shrimp, an enzyme that could be used in shrimp farms to eat up the toxic waste produced by shrimp fries fed on high protein feed to speed up their growth. This waste was responsible for the high mortality rate of the fries (making aquaculture a very expensive proposition) and the farmers would treat it with chemicals and antibiotics, which is why Malaysian shrimp was banned in the US and Australia about five years ago.

Cheong and Sia came up with a solution — enzymes that eat up the waste matter, thus cleaning the water naturally. The product had two effects. First, it arrested the pollution caused by shrimp farms (when the sludge from the ponds were released into the sea). Second, the fries in the ponds started to thrive, increasing the profitability of the farm in question.

Timcare has decided to start its own shrimp farm in Banting to test its products, with a view to inviting regulators from the US and Australia to look at the shrimp and see if the harvest meets their requirements.

Cheong says, “I wanted to exhibit to the farmers that my shrimp farm has no sludge. The enzymes eat up all the sludge and so there is no need to flush your waste into the sea.”

The company supplies Bionic Shrimp to aquaculture farmers in Vietnam, who have embraced the product wholeheartedly. “These farmers produce organic food. And unlike us, they can export their shrimp to the US and Australia,” Sia points out.

While the company was developing Bionic Shrimp, it was also looking at how to address the problem of dung contamination in chicken farms. It came up with Farmer Composter, a product that could be used to convert chicken, cow and pig manure into organic fertiliser in just 10 days.

“In chicken farms, after they have collected the eggs, they use an excavator to dig a hole, dump all the manure in there and cover it because they do not want to process the waste. The problem is that the dung in the huge hole will slowly seep into our water bridge and contaminate the water,” says Sia.

Farmer Composter treats the dung and turns it into valuable fertiliser by breaking it down over a much shorter period through the use of specific enzymes. This product has already taken off in Thailand, Vietnam and Indonesia.

Then, Cheong and Sia turned their attention to a more immediate problem — the oil and grease seeping into drains from improperly treated water from hotels and other eating establishments. “These enzymes digest the fat, oil and grease and turn these into water and carbon dioxide. We developed this product because if you walk around town, especially the eating places, the drains are smelly, dirty and full of oil,” says Cheong.

“If you use chemicals to wash the drains, it is harsh and not environmentally friendly. Also, the chemicals do not digest the fat. And if you use hot water, you are merely transferring the problem somewhere else — because once the fat cools, it coagulates again.”

The company came up with EcoBalls and GSO Digester, products that can break down the fat and nutrients into water and carbon dioxide. “We speed up the decomposition process of the protein cycle. The whole process usually takes two months, but we bring it down to three days,” says Cheong.

This has been verified by Dr Ng Chee Guan, deputy vice-chancellor of University of Malaya’s Institute of Ocean and Earth Sciences (research and innovation office). “He conducted tests in restaurants that came under the purview of the Kuala Lumpur City Hall (DBKL) at the end of December 2016. DBKL had selected six or seven restaurants to run this trial and it was very successful. But somehow, along the way, I do not know what happened. The order did not go through,” says Sia.

“Dr Ng even proposed to the city council to put different coloured stickers (representing the months of the year) on the restaurants to show that they have used EcoBalls in their grease trap for that month. So, when the enforcement officers see the sticker, they do not have to enter the restaurant. He actually did a comprehensive study and implementation. But nothing came of it,” says Cheong.

In Malaysia, because the enforcement is not strict, restaurant owners were not biting because they felt that they would be throwing money down the drain. “If I go to a coffee shop and ask them to use this ball so that the waste water that goes into the drain will not smell, they ask why they should waste their money,” he says.

The husband and wife went to Singapore and Hong Kong, which were more receptive of this particular product, as well as the UK and France. “In Paris, there are a lot of cafés and old buildings. Parisians are very particular about smell. When you put this product into the grease boxes, there is no smell. And a side effect is that it also kills pests such as cockroaches, which tend to gather around the grease box,” says Cheong.

In London, they made a cold call to a grease trap manufacturer who felt that the product could help the city address its “fatberg”. “The continuous fat that disappears down the pipes in London has started to coagulate and block the entire underpass or waterway. This is what they call the fatberg,” he says.

Basically, Timcare’s products are developed using a process called biomimicry, or mimicking bodily or other natural processes. “In our bodies, we use lipase to digest fats, protease to digest proteins and amylase to digest carbohydrates,” Sia points out.

Cheong says, “So, we looked for lipase and protease sources. The professors guided us to the right raw materials and even what specifications to look for.”

The company also produces a NanoShield spray that is capable of destroying 3,000 species of bacteria and viruses and is anti-fungal and anti-viral in nature. The product is especially popular in kindergartens, where it is sprayed industrial style in common areas and on items such as toys and desks. Some parents spray it on their children and themselves.

In the Philippines, Timcare has teamed up with a company called Biocare, which deals in government projects. “Our EcoBalls and GSO Digesters were used to clean Boracay Island when it was shut down for six months. At the time, the waste from the septic tank was shooting out into the sea. It had been happening for years, but eventually the problem got so bad that you could actually smell the fecal matter during low tide,” says Cheong.

One of the company’s products — the Cockroach, Mosquito and Odour Remover — appeared on a segment of Channel News Asia in Singapore in May 2017 when the Member of Parliament for Tampines decided to switch from the conventional pest removal method to this more organic one.

In Malaysia, the company has not managed to break into the government market yet. So, it sells its products to private companies such as the Grand Hyatt Kuala Lumpur, Marriott Hotels, Four Square and Palm Gardens.

Although Timcare’s products are catching on in other markets, the company lacks any form of institutional support in Malaysia. Cheong and Sia would appreciate the support of local councils, to say nothing of help in terms of export promotion. Its products are on-trend (taking into account the global move towards environmentally friendly solutions) and have great potential to take off in the country and abroad.