Combating pollution one motorbike at a time 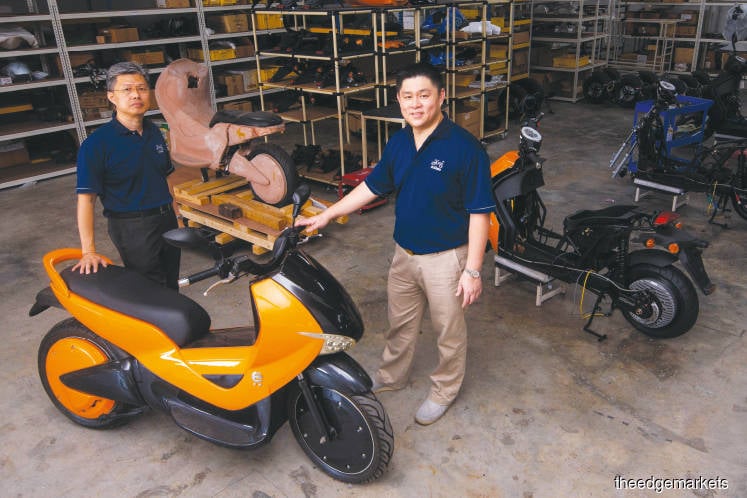 Industry challenges: Getting the public to consider two-wheel EVs when purchasing new motorcycles and getting more sales

Eclimo Sdn Bhd, the maker of Malaysia’s first electric motorcycle, uses patented lithium ion-based energy cells. Co-founder Datuk Dennis Chuah’s interest in bikes started when he was in secondary school in the 1980s. Like his peers, he desperately wanted a racing bicycle. But he did not want to burden his mother. So, he scavenged at metal junkyards to find parts to build his own.

His friends thought his bike was “cool”, so he started collecting more parts to assemble more bicycles. He learnt to assemble two-wheelers and this would become the foundation of his business later on.

After he was done with school, Chuah worked at McDonald’s. At 23, he set up his own packaging firm, Zapstat Sdn Bhd, manufacturing anti-static packaging materials for the flourishing semiconductor industry in Penang.

He sold the company in 1999 and went into recycling electronic scrap, particularly computer parts, where the precious metals in circuit boards were collected and resold. He also refurbished used computers and sold them to internet cafés.

Chuah realised that electric vehicle (EV) manufacturers were mushrooming in the market and they needed good batteries. His time at ETI Tech had allowed him to gain expertise in battery technology and this gave him the confidence to create his own EV with partner Liew Chun Peng.

Liew was a mechanical engineer at electronic components manufacturer Tamura Electronics Malaysia. The pair became friends and after several years, they decided to team up and develop Eclimo motorcycles by marrying their areas of expertise.

Eclimo (short for Eco-Life Mobility) was set up in 2008. It manufactures EVs that operate like 125cc combustion motorcycles, except that they run on lithium ion-based energy cells developed in-house by the duo and can travel 100km on a single charge. The motorbike can run up to 100kph (minus the noise and gas pollution) and be hooked up to any wall outlet to charge. It takes four hours to fully charge its battery.

The partners spent four years and RM20 million fine-tuning the design (partly aided by the RM3 million they received from the Malaysian Investment Development Authority) before Eclimo was certified by the Road Transport Department and Sirim in 2012.

Chua says that by using the company’s EV in place of combustion motorcycles, users can avoid the emission of 7kg of carbon dioxide into the environment for every three to four litres of petrol or for a travelling range of 100km.

Its first client, KFC Holdings Malaysia Bhd, leased 300 EVs to make food deliveries in every state. The Royal Malaysian Police leased 33 units to start with before getting the support of local governments in Melaka, Selangor and Penang.

The EVs are leased because they cost between RM10,000 and RM18,800 each, whereas the cost of a locally made combustion engine motorcycle starts from RM4,000. Leasing is one way around this, although it will take longer for the company to make a profit. Eclimo charges RM450 a month for each EV and this covers the occasional maintenance of the vehicle as well as its battery pack.

“Overseas, we sell our two-wheel scooters and/or batteries for other vehicles such as three-wheelers. With the trials being successful, we will send the scooters to Thailand in the coming months to roll out for business-to-business (B2B) or business-to-government (B2G) usage,” he says.

The scooters will be for a targeted market — the motorbike taxi industry, he adds. “They have been there for decades and the taxis use combustion motorcycles. The people there are happy [with our product] because a lot of the electric scooters in the market are not able to serve as a motorcycle taxi.

“Eclimo has higher-end specs. This means it can run at a high speed of 100kph and needs the power to do so. That is our strength.”

This is Eclimo’s first foreign venture, but Chuah points out that it is only focusing on B2B and B2G agreements. He says those in the B2B segment have a high daily mileage and can travel up to 200km per day, which means higher petrol consumption and cost.

“The roads are so congested in Bangkok and vehicles consume more petrol during jams. Also, petrol prices there are higher than in Malaysia. So, an electric product works,” he adds.

As for Cambodia, Chuah wants to take things one step at a time and not overwhelm Eclimo’s capacity to manufacture batteries and scooters. “Thailand is the focus. I cannot go to all the countries I want right now. We need to do so according to our means,” he says.

To take scooters into Thailand, Chuah needs the approval of the country’s Department of Land Transport. The rollout of the scooters should be done by the first quarter of next year, he says.

He is also looking at getting the scooters assembled in Thailand. But the battery itself will still be made in Malaysia for now. Eventually, he wants to train people to assemble the batteries so that they can repair them.

“The first thing that comes to mind [when talking about EVs] is the range and how much the battery costs. So, we want to give people peace of mind, knowing that the battery can be repaired and it is not costly,” says Chuah.

The fact that the battery can be repaired is what sets Eclimo apart. “There are a lot of batteries in the market right now from the US, Japan, South Korea and China, but they cannot be repaired. Our technology enables battery repairs and we have a unique international intellectual property for this,” he says.

Just like that of a mobile phone, the power of a lithium battery degrades over time, says Chuah. This means the travel range of the scooter will become shorter and shorter, and the battery has to be charged more regularly, making it inconvenient for users. Eventually, the battery has to be replaced.

Chuah repurposes old batteries, giving them a second life as a power storage unit. “The batteries with 60% to 70% power can still be used. So, we take it out [of the scooter] and turn it into sort of a power bank called Eclimo Power,” he says.

“We convert these batteries so they can be used as generators to replace, say, combustion generators at night markets. These can also be used to power rural villages, like those in Sabah and Sarawak. We are already using them for this purpose right now.”

Eclimo Power can store between 400Wh and 10kWh.

In April, Eclimo signed an agreement to collaborate with Malaysia Automotive Robotics and IoT Institute (MARii), an agency under the Ministry of International Trade and Industry, to develop its technology for use on buses and tractors. Chuah says the battery for an electric bus would be equivalent to 70 batteries for scooters and the company is doing R&D to develop it.

In Malaysia, 400,000 to 450,000 new motorcycles are sold annually and when people want to buy one, they hardly ever consider an electric option, says Chuah.

“That is because they do not see electric two-wheelers in the market and they do not know that Eclimo exists. So, we want to let them know that there is this option,” he adds.

Chuah points out that more government support is needed. He says in countries like Thailand, Cambodia and the Philippines, the air is severely polluted from vehicle carbon emissions. But in Malaysia, we see blue skies. So, addressing air pollution is not a priority.

Once Eclimo gets the government’s support, it can address consumers. “People think that getting an EV is expensive. Yes, the initial investment is high, but the cost is dropping fast. In the long run, the consumer will definitely benefit from using EVs. However, we still need the intervention of governments, perhaps talking about clean air, to get consumers to consider it,” says Chuah.

Financial institutions also need to be on board because right now, not many banks offer loans to people who want to purchase two-wheeled EVs. “Banks are slowly providing loans for EVs, but not two-wheeled electric scooters. So, if consumers want to purchase our motorbikes, it has to be cash or credit card,” he says.

Chuah believes that all it takes for someone to switch to electric is to try it out. “The moment they use electric, they will not want to go back to combustion motorcycles because of all the vibration, noise and emissions. Once they go electric, they never go back.”