Condivergence: Is democracy a noun or verb? 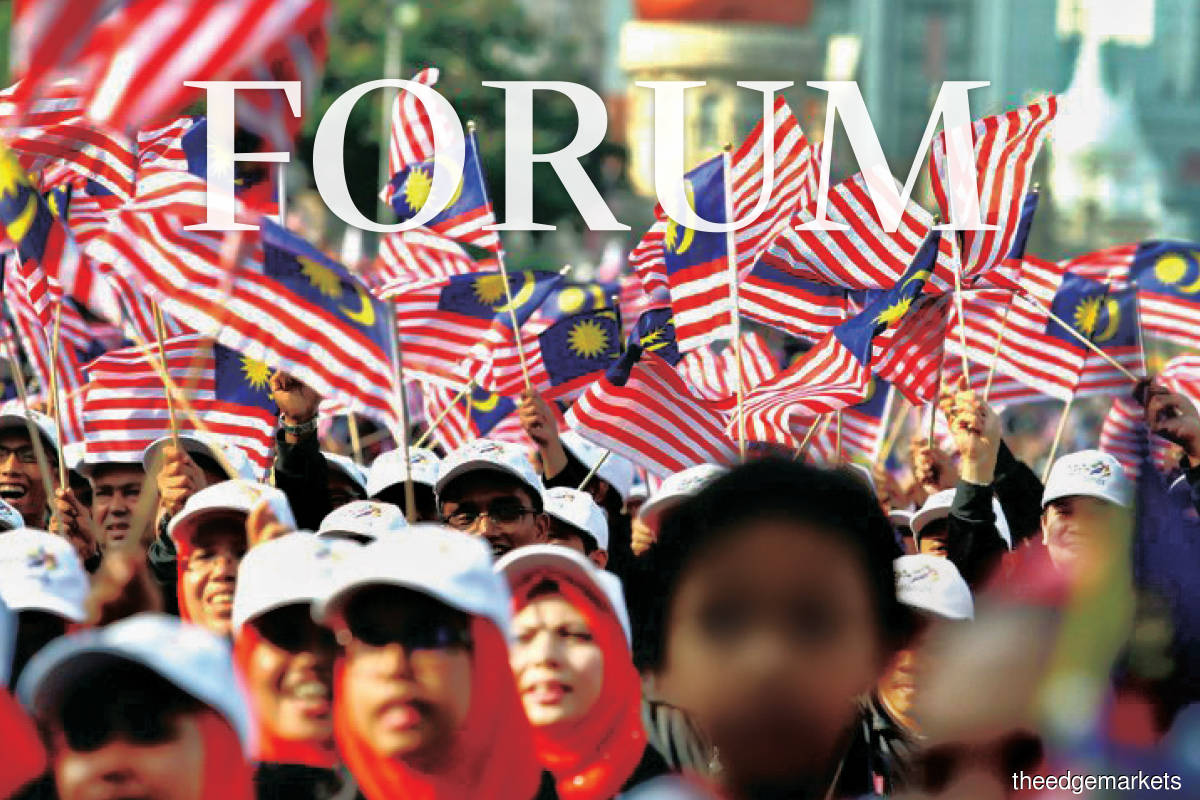 It is more constructive to discuss how our children can have a better future and be able to compete effectively against an increasingly tough, cruel and hostile global environment. We cannot change the past, but we can shape the future. (Photo by Suhaimi Yusuf/The Edge)

Do we live in a world of democracy versus autocracy? That is the existential choice offered by America and her allies as expressed by the Biden administration. But what is the right definition of democracy?

Although the word “democracy” came from ancient Greece — in 507 BC, Athenian leader Cleisthenes introduced a system of political reforms that he called demokratia — its meaning has changed profoundly since then. The Greeks contrasted rule by kings or royalty as aristocracy, against rule by a few as oligarchy and by ordinary citizens as democracy. The city of Athens had a population of roughly 250,000, of whom 30,000 were men with voting rights (women and slaves were excluded), and citizenship was open to all men who underwent military service. They could participate in the city’s Assembly, which met 40 times a year, and selected, by lot, a Council of 500 that managed the affairs of the city, including its laws and domestic and foreign policy.

However, ancient philosophers such as Plato reviled democracy that governed by public opinion rather than true knowledge, acknowledging that the public could be stirred by false information that engendered “insolence, anarchy, wastefulness and shamelessness”. Plato preferred rule by the knowledgeable elites, but how elites used or misused information to fool the masses to benefit themselves still plagues democracy as practised today.

Democracy in its modern form came after the 1789 French Revolution, in which the urban middle class revolted against the aristocracy. According to anthropologists David Graeber and David Wengrow in their new book, The Dawn of Everything: A New History of Humanity, the ideas of “liberty, equality, fraternity” expounded by French intellectuals like Jean-Jacques Rousseau came from ideas of freedom and equality espoused by American Indians and picked up by the French settlers in Canada. American Indians lived with great freedom in a land of plenty, and property was shared. In Europe, where land was scarce and owned largely by aristocrats, there was little equality and individual freedom. Thus, such novel ideas spread rapidly throughout Europe through the printed media, even as society struggled to cope with the inequities of feudal rule in an emerging industrial age. In other words, the discovery of America created the cross-fertilisation of social ideas across the Atlantic to help create a revolutionary age. New lands brought new ideas and opportunities, introducing degrees of freedom and power that set the stage for the later rise of America relative to Europe.

The American Revolution of 1776 was more a revolt of American colonies against the unjust rule of Britain: popularising the notion of “no taxation without representation”. The Declaration of Independence, drafted by Thomas Jefferson, held that “all men are created equal” and that the government must derive its power from “the consent of the governed”. But at that point of time, America was still a slave-owning society and it took nearly two centuries to get racial and gender equality properly enacted.

The French Revolution that came a decade later was a rejection of monarchist royalty. After the fall of the Bastille in 1789, citizen delegates to the Constituent Assembly passed the Declaration of Rights of Man and Citizen, proclaiming that “men are born free and remain equal in rights”. But after disposing of the French king, the new republic was besieged by monarchist neighbours seeking to restore European order, which culminated in the rise of Napoleon as the new French Emperor. It took World War I (a century after Napoleon) to finally destroy the European monarchies of Germany, Austria and Russia and the Asian Ottoman and Qing dynasties. During the 19th century, these European democracies embarked on the largest colonisation of the rest of the world, even as they preached equality and freedom.

In contrast, the governance structure in America evolved in its early stages into essentially the two-party state around the Federalists under George Washington and John Adams (the first and second presidents) and Democratic-Republicans under Thomas Jefferson and James Madison (third and fourth presidents). John Adams famously decried the perils of democracy: “Remember, democracy never lasts long. It soon wastes, exhausts and murders itself. There never was a democracy yet that did not commit suicide.”

By the middle of the 19th century, the present two-party system had largely stabilised around the Democratic Party, which supported progressive liberal ideas (but had traditional Southern support in slavery and protectionism) and the Republican Party, representing the traditionalist conservative side of American politics that preferred free trade. It was Republican President Abraham Lincoln who fought the Civil War to preserve the Union and evolved the term “government of the people, by the people and for the people”.

Because the post-Napoleonic world was largely dominated by the Anglo-Saxons (British Empire to 1945 and America thereafter), democracy today comprises roughly the following traits: regular elections determined by majority rule, whereby all adult citizens have one equal right to vote along with the freedoms of speech and assembly. There are constitutional checks and balances on the state, through the separation of powers between the executive, judiciary and legislature, including public accountability and respect for minorities.

Political historian Professor James Miller’s 2018 book on the history of American democracy Can Democracy Work? was careful to distinguish democracy from liberalism, particularly since the neo-liberal creed was much later in evolution. Miller noted that governments formed by majority vote may well support illiberal ideas and could be as hegemonic as autocracies.

These contradictory trends have been confirmed by Swedish think tank V-Dem’s 2022 Democracy Report, which lamented that “the level of democracy enjoyed by the average global citizen in 2021 is down to levels last registered in 1989”. V-Dem distinguishes four categories of governance: liberal democracies, electoral democracies, electoral autocracies and closed autocracies. Using its database-built Liberal Democracy Index, V-Dem found that liberal democracies peaked in 2012 (after the Arab Spring) with 42 countries and their number is down to 34 in 2021, accounting for 13% of the global population. Unsurprisingly, liberal democracies are mostly in advanced, rich countries in Europe and North America.

Malaysia is considered one of four countries in Asia-Pacific that are democratising, together with South Korea, Sri Lanka and Fiji. In 2021, there were five military coups and one self-coup (Tunisia).

There are at least three key trends that explain why there are such winds of change. First, autocracies seem to have performed better in tackling structural issues than liberal democracies, particularly after the 2008 global financial crisis. One reason why India may be showing autocratic tendencies is that the Modi regime is grappling with the difficulties of getting out of the legislative and judicial constraints that hinder executive action. In many governments, more and more presidential powers have been granted to the prime minister or elected leader. This concentration of powers arises from attempts to deal with tough legislative deadlocks or bureaucratic barriers to change or the need to have urgent response to crisis conditions.

Second, misinformation through either fake news or manipulated media is on the rise, especially through social media. This has been worsened by war and polarisation. Societies are riven into different factions where there is no clear majority or legitimacy for painful structural change. Various surveys show that popular trust in governments is very low in electoral systems but is higher in India and China.

Third, there is no obvious way to reform the current system that seems to be breaking down in the face of complex climate change, ageing demographics, war, social inequality and disruptive technology. The common lament is that the current generation of politicians is not able to articulate a vision that commands the consensus of the majority. Instead of a tyranny of the majority, countries are also divided by a “tyranny of the minority”, particularly in the face of growing inequality in which the richest 1% has more say, with control over income, wealth, media and political power. Why else would Elon Musk buy Twitter?

How to build that social consensus to arrive at a new social contract is clearly a pressing issue in many countries. The largest electoral democracy, the US, is deeply divided after Donald Trump’s controversial presidency, but he may return after 2024. Trump tried to rally the country against common enemies, cast as China and immigrants, rather than drive an internal process of renewal. Indeed, the great enemy to democracy may not be foreign threats, but from internal corruption and decay.

Electoral democracy suffers from several core weaknesses. First, it is very expensive to run, costing billions in election funding and, therefore, subjects the system to corruption. Second, it is short-term because everything runs on an electoral cycle of two to four years. This forces the winners to deal with short-term issues, but gives no time to address serious and complex structural changes. Third, elections or referendums run on simple issues like Brexit could end up changing the direction of a country, without preparing everyone on how to deal with such change.

What this brief survey shows is that democracy as an idea and practice is still evolving. It is not a static noun that is carved in stone. Each country has to find its own form, structure and processes that it is comfortable with, so that democracy is more like a verb, a state in continuous change.

All nation-states are bound together by tradition, common understanding or a constitution, written or otherwise. There is today no “best practice” or model for how each country should manage its own change, because each country is different in diverse ways. What has emerged is that smaller countries may be easier to reform than larger countries, especially if there are social mechanisms to ensure proper feedback on what concerns the public. In other words, the world is exploring how people from different parts of the country can come together to discuss in a civic manner how we should face the uncertain future together.

I find it therefore less fruitful to lament on the state of democracy. It is more constructive to discuss how our children can have a better future and be able to compete effectively against an increasingly tough, cruel and hostile global environment. We cannot change the past, but we can shape the future. What we should be concerned about is how we can build a process in which we can have a conversation on what each of us can do to help the country move ahead in an uncertain future.

Worry less about “democracy” as a static noun, because “becoming” is the verb for the dynamic future.