Condivergence: A tale of two narratives 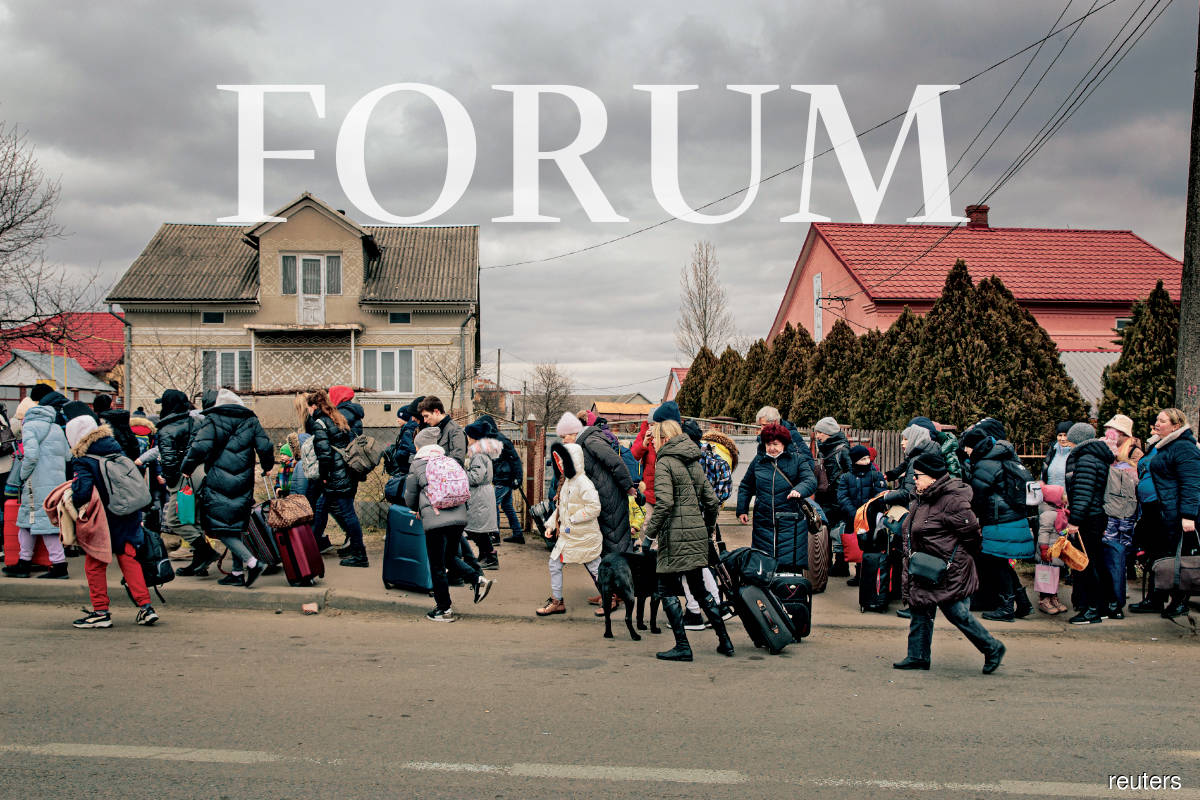 In Ukraine, a deadly war is being fought, with more than 6.8 million refugees out of the country, the largest refugee crisis globally since World War II

Set in the time of the French revolution (1775-1793), the story compared and contrasted two cities, London and Paris, but was actually a commentary on how Britain was undergoing her own gradual change, while France was about to enter revolution with the overthrow of the monarchy. At the individual level, the story was about personal redemption and resurrection, as the English hero dies as a substitute at the guillotine for his French friend.

Dickens’ opening lines easily apply to the current age of pandemic and war, when everything is polarised into democracy versus autocracy, war of freedom versus evil, black versus white. Dickens cleverly wove a tale that penetrated not just into personal lives and minds, but also the wider context of the tumultuous age of emerging capitalism and the wrenching shift out of feudal monarchy into a republican, industrial era.

We do not have such a Dickens today, only science fiction or fantasy stories, such as The Matrix or JRR Tolkien’s The Lord of the Rings, stories about Good versus Evil, white versus dark lords. But former German chancellor Angela Merkel expressed today’s quantum reality as, “Everything is possible; take nothing for granted”, in her Harvard commencement address. True enough, what was unthinkable has become reality — Europe is now back at war, with everything weaponised from media to finance.

Travelling through France and Holland in May, I saw that the mood was evocative of the roaring 1920s, when people were partying, restaurants were full, everyone just happy to be out of lockdown and confined loneliness. And yet in Ukraine, a deadly war is being fought, with more than 6.8 million refugees out of the country, the largest refugee crisis globally since World War II.

The contrast between peace and prosperity versus war and disaster at the same time cannot be more stark.

Truth having been sacrificed with war, we have today two main narratives between an “idealist” Western rule-based order and “realist” view of the rest of the world (Rest). Nato claims to be fighting to defend the freedom of individual nations to choose their own sovereignty, which is impeccable in logic. For them, it’s a just war. But how just is it when only the Ukrainians are dying while Europe still buys Russian oil and gas?

The Russian view, according to President Vladimir Putin’s own historical perspective that Russia and Ukraine have the same roots, is that Nato’s eastward expansion crossed Russia’s national security red line, so Russia acted to defend her Western border to stop Nato expansion. This line is articulated by the realist international relations view of University of Chicago’s Prof John Mearsheimer in his books and YouTube lectures.

After 100 days of fighting, in which no one is precisely clear who is winning or losing, I have given up watching BBC or CNN and have instead gone straight into YouTube to explore very different narratives and perspectives. YouTube at least allows you a choice ranging from short blogs with emotional points of view bordering on conspiracy theory to long, boring but insightful analyses of how events are unfolding. As futurist Samo Buja stated, how you interpret unfolding events depends very much upon the model in your head that is loaded with your own values and biases. Listening to views from India, Latin America and Africa gave me a different view of how they see the world changing.

As this Condivergence series has explained through complexity studies, there is no simple objective truth that everyone will agree on. All we can discern from constant changing complexity is that a pattern emerges out of disorder. Those who can read this pattern and take action before everyone else, will profit. A simple linear projection is only one of many possible different paths in different directions. These non-linear paths can be curvilinear — in waves, cycles, circles or loops — or they could be quantum jumps into a totally different space. The conventional linear approach in which the future is an extension of the past (the mega-trend projection of history) is too simplistic and outdated.

Seen from a planetary systemic whole, the pattern emerging in this fog of war is that the West, roughly one billion of rich Americans, Europeans and Japanese, wants to maintain status quo — their rules-based order that preserves their right to dominate the narrative. They claim that it is rules-based and democratic, but in today’s world of eight billion people, seven billion never voted to agree to such rules. Thus, the Western order is being challenged by 1.4 billion Chinese, 1.3 billion Indians and roughly 1.6 billion Muslims all the way from Indonesia to North Africa. To this we must add Russians (146 million), Latin Americans (665 million) and Africans (1.2 billion) who represent diverse views on how the world should be run, challenging the Western right to dominate through media, money, military and technology.

The West cannot white-wash their imperial past, when they brutally seized resources from the Rest as if it was natural and their right. For the Rest, today’s injustices have a lot to do with that bloody colonial history, in which the West divided and ruled. The troubles of Africa, the Middle East and Latin America are totally related to how the West fought over their natural resources, such as oil, slaves and gold. Thanks to their mastery of the English language and natural argumentative abilities, Indian thinkers are now emerging as an important voice of the Rest.

In their “choose sides” narrative, Indian External Affairs Minister S Jaishankar said it very clearly: “We choose our own side.” Those who argue that India must align with the West to contain China forget that the British took as much as US$45 trillion from the Indian subcontinent during the British Indian occupation and allowed as many as three million Indians to die from famine during WWII (just google this). Africa and the Middle East suffer because their borders are colonial-determined straight lines that bear no resemblance to geography or tribal history, so border conflicts become inevitable over time.

The PwC projections of the world estimated that by 2050, the global ranking by GDP purchasing power parity (PPP) terms would be China (1), India (2), Indonesia (4), Brazil (5), Russia (6) and Mexico (7). From the West, only the US and Japan would remain in No 3 and No 8 positions. Based on GDP by market exchange rate (MER) basis, the top eight would exclude Russia, with the US being No 2, Japan 5, and Germany 7. In other words, other things being equal, China, India, Indonesia, Brazil and Mexico, already numbering 43% of the world’s population in 2022, would be major powers by 2050.

Using the MER basis, these five Rest economies would account for 67.4% of the total GDP (MER) of the top eight by 2050, and the Rest would number 12 countries (South Korea included), accounting for 65% of top 20 GDP by 2050. Thus, the picture is that by population and GDP projection terms, the West will be a significant minority relative to the Rest, powerful but no longer dominant.

This is a seismic change in global affairs. The narratives by 2050 will change to reflect that change. By that time, no single nation could dominate the Rest, not even militarily or financially. A more democratic narrative would have to take the opinion of the Rest into serious consideration, because no one can predict whether the multi-polar world will divide into blocs or become even more integrated and yet separate at the same time (condivergence in reality).

How should investors look at these global trends? The correlation between GDP and investment returns is never linear or simple. Investment in the Chinese stock market has not given returns that are as good as investment in US markets; certainly it is more volatile. My investment in Japanese stocks, betting a reversion to the mean after the bubble in 1989 and considering that the Japanese economy is very strong, has been very disappointing. And yet, I can disclose that my investment in Indian exchange-traded funds (ETF) has returned long-term growth, despite short-term volatility.

I will not be around by 2050, but if you ask me where I would put money in the long term, I would invest in Indian, Indonesian and Vietnamese ETFs. These are economies that are building their own futures, not trying to get caught in the Great Power game. How intellectuals in these countries define their own view of their destinies could very well change the global game.

Coming back to Dickens, the new A Tale of Two Cities may well be A Tale of New Delhi/Beijing, Bangalore/Shenzhen or even Nusantara/Rio de Janeiro. Three decades from now, it will still be the best of times and worst of times. It is not about “either or” but “and”. We live in one world that is good and bad at the same time.

As Bob Dylan’s song says, “the times they are a-changin’”.