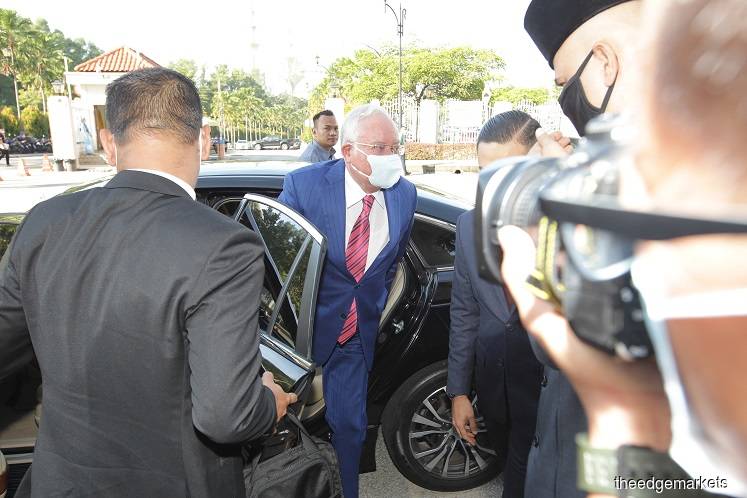 Najib’s lawyer Tan Sri Shafee Abdullah had earlier told the court of the defence’s application to recuse Sri Ram in the case.

Shafee argued that the matter should be resolved first because if the court were to proceed with the trial, it would be as if the application is non-existent or trivialised.

"Any prosecutor that is involved in that sort of transaction cannot be impartial and therefore ought to be recused," he said, referring to a “revelation” by former Attorney-General Tan Sri Mohamed Apandi Ali last week via a Facebook posting, and subsequently an affidavit, that Sri Ram was sent to see him in January 2018 by Tun Dr Mahathir Mohamad, to persuade him to arrest then prime minister Najib.

Justice Mohamed Zaini, however, said the trial should continue, as the recuse application should be dealt with separately. The prosecution has been given three weeks to respond to the application, and the court will hear the result of the application on Aug 7.

"So, taking into consideration that we are taking today off, and a good part of tomorrow morning, I’m inclined to proceed with the trial first," Justice Mohamed Zaini said.

Further dates previously fixed for the trial are July 1 to 3, and July 27 to 30.

In his Facebook posting, Apandi claimed that Sri Ram visited his home in January 2018 to persuade the former to arrest Najib at his office. Apandi said Sri Ram told him that he was sent by Dr Mahathir.

This is the third time Najib has tried to remove Sri Ram as the prosecutor in the case.

Previously, he made an application before 1MDB-Tanore trial judge Justice Collin Lawrence Sequerah, who dismissed it. The decision was upheld by the Court of Appeal and Federal Court.

This was initially dismissed by the High Court and the decision was upheld by the Court of Appeal.

However, the Federal Court treated the judicial review application as separate from the one heard before Justice Sequerah and ordered that the case be heard on its full merits by the High Court where the application had been filed.

In the 1MDB audit tampering trial, Najib is charged with abuse of power as a public officer in his capacity as prime minister and finance minister in altering the 1MDB audit report which was to be tabled to the Public Accounts Committee in 2018. This is so that no action could be taken against him by Parliament.