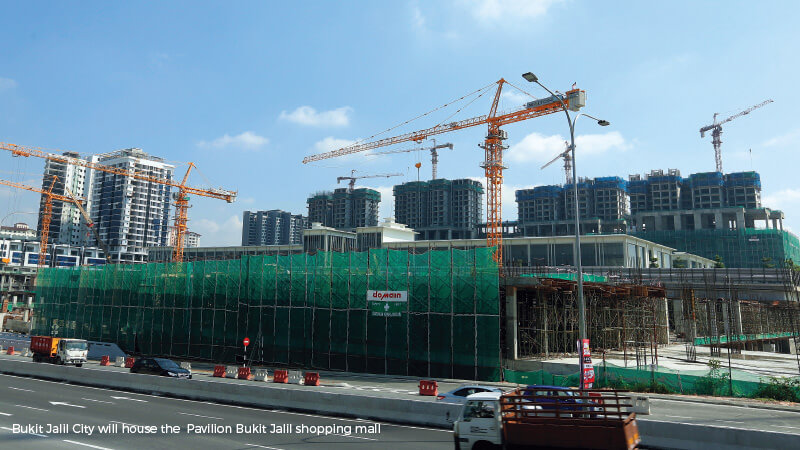 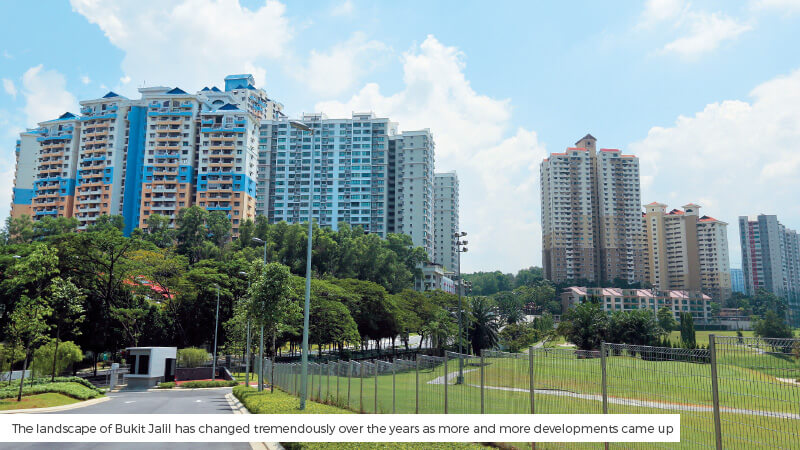 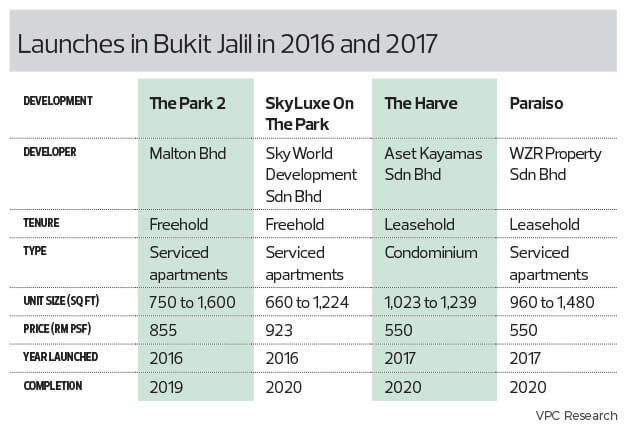 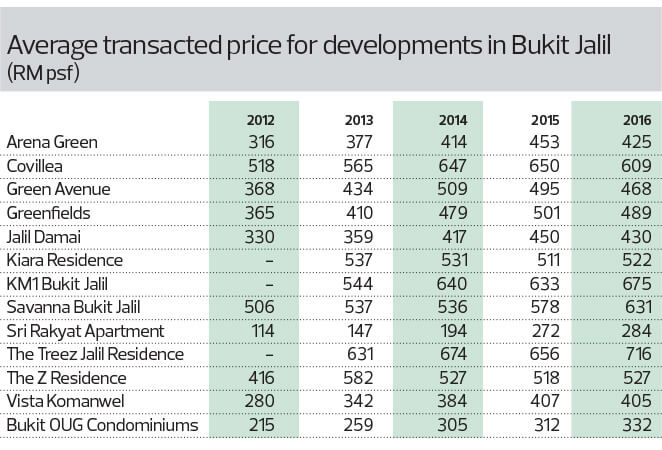 Bukit Jalil first rose to prominence when the Commonwealth Games was held there in 1998. Since then, it has maintained a high profile — various musical events and exhibitions held there have attracted huge crowds, as did the recent Southeast Asian Games.

While hosting international sporting events has had a significant role in transforming the area, it is undeniable that property developers have played a big part in hastening the pace of growth. This is due its proximity to Kuala Lumpur City Centre and easy accessibility. Bukit Jalil is accessible via the Shah Alam Expressway, Bukit Jalil Expressway, Maju Expressway and Kuala Lumpur-Seremban Highway. There are also several light rail transit stations nearby, namely Bukit Jalil, Sri Petaling, Awan Besar and Muhibbah.

Real estate consultants tell City & Country that Bukit Jalil City and Kuala Lumpur Sports City have sparked a second wave of development in the area, and an upcoming development — Bukit Jalil Sentral — will sustain the momentum.

“Bukit Jalil City or, to be more specific, Pavilion Bukit Jalil, and the regeneration of Bukit Jalil National Sports Complex [into Kuala Lumpur Sports City] have given fresh impetus to the development of the area,” says CCO & Associates director Chan Wai Seen.

Landed and high-rise developments have been mushrooming in Bukit Jalil.

Then, it developed high-rises, namely Savanna and Savanna 2, Covillea, KM1 East and West, Greenfields, Arena Green and Green Avenue. Its ongoing project is The Link 2 mixed-use development, which comprises serviced apartments, 4 and 6-storey shops and shoplets. Phase 1 is sold out while Phase 2 is now open for registration.

Earlier residential developments include Vista Komanwel A, B and C, which made up the Commonwealth Games Village in 1998. The blocks were completed in 1997, he says.

This has boosted the worker and student population there, thus raising the demand for housing in the vicinity. Seeing the vast opportunities, many developers have rushed in to grab a slice of the pie.

The landscape of Bukit Jalil has changed tremendously over the years as more and more developments came up.

Saleha Yusoff, director of research and consulting at Nawawi Tie Leung Property Consultants Sdn Bhd, notes that major developments such as Bukit Jalil City and KL Sports City have been a catalyst for its further transformation.

The 50-acre freehold Bukit Jalil City, jointly developed by Malton Bhd and Ho Hup, will house the Pavilion Bukit Jalil mall upon its completion in the fourth quarter of 2020.

Soon, newcomers Malaysian Resources Corp Bhd (MRCB) and the Employees Provident Fund will be jointly developing a 76-acre tract there. This leasehold project, named Bukit Jalil Sentral, will have an estimated gross development value of RM21 billion. To be developed over 20 years, the mixed-use project will comprise serviced apartments, shopoffices, office towers, malls and hotels.

MRCB obtained the land through a privatisation agreement with the federal government for the refurbishment and upgrading of Bukit Jalil National Sports Complex for the SEA Games in August.

Saleha says the prices of residential units in Bukit Jalil, especially high-rises, have generally gone up at a compound annual growth rate of 5% to 7%.

The take-up rate of new launches has also been very good as the prices are seen to be affordable for the mid-market and upper-mid-market units, she adds.

“Bukit Jalil is now a preferred residential area not only because it is well connected by highways and public transport but also for its various amenities such as schools, institutions of higher learning and medical centres as well as an 80-acre recreational park,” she says.

Projects launched in 2016 and this year in Bukit Jalil and its surrounding areas are selling for RM530 to RM930 psf, she adds.

According to Nawawi Tie Leung Property Consultants, freehold SkyLuxe On The Park (developed by SkyWorld and located next to the park) is going for RM923 psf, compared with RM855 psf for The Park 2 (developed by Malton, within Bukit Jalil City).

As for the secondary market, Wong notes that of the 13 high-rise developments in Bukit Jalil sampled by the company, most saw an increase in their average transacted price last year — except for Arena Green, Covillea, Green Avenue, Jalil Damai and Vista Komanwel — compared with 2015.

“The prices of the majority of developments rose from 2012 to 2015, except for Green Avenue, which saw its transacted prices falling from 2014,” he says.

“Kiara Residence also saw a decline in transacted prices from 2013 to 2015. However, the price trend reversed slightly last year.”

Wong says the buyers comprised owner-occupiers, investors and expatriates. The owner-occupiers were mostly first-timers who bought condominiums and serviced apartments. The investors, on the other hand, were looking to rent out their properties to students and working adults, he adds.

With more and more developments coming up in Bukit Jalil, the consultants have raised concerns that there may be an oversupply of residential properties, especially high-rises, in the next few years.

Saleha says this could happen as many of the projects launched several years ago will be completed between 2018 and 2020.

She notes that the gap between supply and the number of households in the Klang Valley was only 4,234 last year — total households were estimated at 1,825,617 (assuming four people per home) and the total residential stock was estimated at 1,821,383 units.

“So, based on KPKT’s (Ministry of Urban Wellbeing, Housing and Local Government) average house ownership of 68%, it means that 1,238,013 households own homes and the remaining 583,370 are either renting or staying in government quarters. Eventually, the latter will want to own a home,” she says.

“And based on the National Property Information Centre’s 2016 residential supply data, the incoming supply is 233,748 units. Therefore, there is a gap between supply and demand, especially in the mid-market segment.”

Despite the concerns, CCO & Associates’ Chan reckons that Bukit Jalil is an established area and the market should be able to absorb the new units easily in the medium term. “Nevertheless, rents and prices may undergo a correction in the short term if the market sentiment does not improve in the near future.”

Commercial developments in Bukit Jalil comprise  mostly shopoffices and shophouses such as The Link Business Centre, The Ritz and Arked Esplanad.

Chan says the high land cost has made it too expensive for developers to build shopoffices there, unless the land is sizeable. Such developments include The Earth Bukit Jalil and Bukit Jalil City, both located in the southern part of Bukit Jalil and nearer to the Bukit Jalil Expressway.

The Earth Bukit Jalil is a 15-acre leasehold development. The first phase, comprising 46 units of 4-storey shopoffices, was completed in 2015. Phase 2 is the affordable housing project, Impiana Sky Residensi, offering 508 units in a 40-storey block on 2.2 acres. Phase 3 is a condominium project comprising 762 units in two blocks called Paraiso, The Earth Bukit Jalil.

In general, the consultants are optimistic about the prospects of Bukit Jalil, especially with the upcoming Bukit Jalil Sentral development.

“In the short term, the focus will be on condominiums and serviced apartments. It may not be viable to develop low-rise projects,” he says.

“Selling prices of secondary projects, such as those located further away from the main developments, may range from RM500 to RM600 psf. Projects that are integrated with Pavilion Bukit Jalil are likely to command higher prices — RM800 psf and above.”