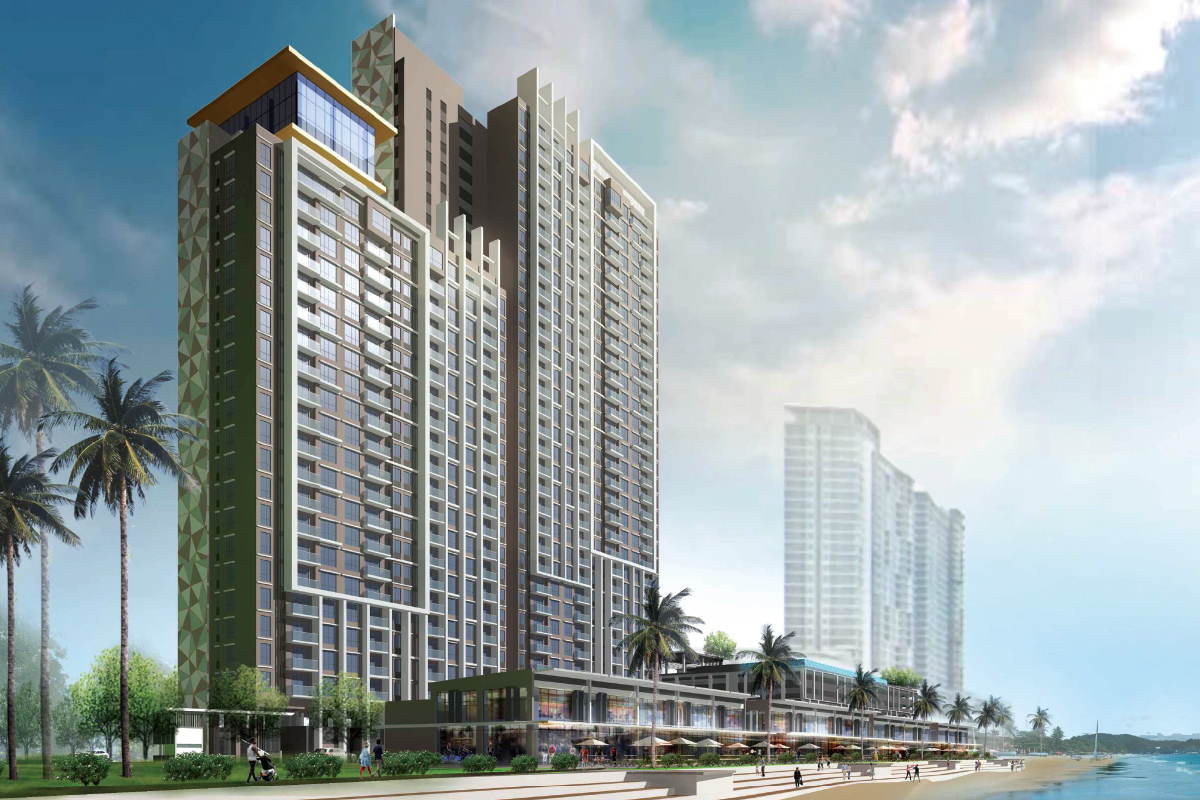 Bina Puri Holdings Bhd, which is listed on the Main Board of Bursa Malaysia, has vast experience in civil and building construction. Since 1975, it has diversified its activities to include property development, investment holdings, civil and building engineering management, highway concessions, quarry operations, manufacturing of construction materials, utilities and hospitality management.

It also has projects in Kota Kinabalu, Sabah, such as the 80-unit Jesselton View and the 12-storey One Jesselton. In Kuching, Sarawak, there is the 1Puri Commercial Centre, comprising 28 shoplots. Currently, Bina Puri has an undeveloped land bank of about 794.44 acres.

This year, the company is preparing to unveil the next phase of its projects in Kuantan and Bentong, Pahang.

Kuantan, the capital of Pahang, received city status in February this year. Bina Puri group executive director Datuk Matthew Tee believes it has a lot of potential. “Kuantan, being the hub of Pahang, has ports, the ECRL (East Coast Rail Link), an industrial sector and an airport, which is said to be expanding to receive international flights,” he says.

Kuantan’s bright outlook has led the company to embark on the 500-acre Kuantan Waterfront Resort City (KWRC) project. Launched in 2016, this integrated development will have tourist attractions, marina and yacht facilities, shopping and F&B outlets, as well as residential, commercial, office and medical components. KWRC is a 70:30 joint venture between Bina Puri and Newston International Group Sdn Bhd. The project was initially a collaboration between Ideal Heights Development Sdn Bhd and JV partner Newston. The former is a subsidiary of Ideal Heights Properties Sdn Bhd, in which Bina Puri initially had a 12% stake, but later acquired in April this year.

“When I joined Bina Puri, we had a 12% stake in Ideal Heights Properties. So, it was like a ‘no man’s land’, and there were common directors,” says Tee, who became a staff member in December 2003 and was Master Builders Association Malaysia (MBAM) president from 2012 to 2016.

KWRC is located in Tanjung Lumpur, a 10-minute drive from Kuantan’s city centre. The entire project will take up more than 500 acres, with part of it comprising beachfront land and most being reclaimed land. Bina Puri will develop the 11.85-acre beachfront land, whereas the land reclamation will be undertaken by Newston, which may appoint another company to do it.

Phase 1 of KWRC was launched in 2016 and completed in 2020, and has a gross development value (GDV) of RM276 million. It comprises two towers, a 348-unit serviced apartment block called Imperium Residence (Tower A) and a 366-unit hotel called Swiss-Belhotel Kuantan (Tower B).

Imperium Residence units were sold at RM550 psf and above,  and has recorded a take-up rate of 81% to date.  The Swiss-Belhotel Kuantan units were sold from RM700,  and  more than 90% have been taken up so far. The hotel units were leased back to the developer for a five-year monthly rental guarantee of between RM1,500 and RM1,700, depending on the sizes, which range from 405 to 862 sq ft.

Meanwhile, KWRC’s upcoming Phase 2, which will be soft-launched in 4Q2021, will have a GDV of RM200 million and comprise serviced apartments and shoplots. Construction will commence in January next year.

Tee says Phase 2 will be launched in the latter part of the year because MCO 3.0, which bans interstate travel, will affect sales. For now, the developer is waiting for things to normalise.

Phase 2, which will occupy a 4.32-acre site, will comprise one tower, with 456 serviced apartments housed in two wings that are 21 and 31 storeys high. The selling price is estimated at RM650 to RM750 psf, and the maintenance fee will be about 30 sen psf, inclusive of the sinking fund.

In addition, there will be 17 two-storey sea-facing shoplots, which the developer will retain for recurring income.

Facilities at Phase 2 will include a six-storey car park podium, a gym and swimming pool as well as water features for children. Amenities in the vicinity of KWRC include East Coast Mall, Kuantan Parade and Berjaya Mega Mall; Kelab Golf Diraja Pahang; and KPJ Pahang Specialist Hospital.

Asked whether high-rise developments are in demand, Tee says, “There are not many high-rises in Kuantan, but we hope our project will be a catalyst for more high-rise projects there.” Asked why some are buying high-rise units now if buyers in Kuantan prefer landed property,  Tee replies: “There are not enough offerings of high-rises, so, when you see one high-rise and then you see two or more, people start to realise that [high-rise living is quite normal]. Maybe there was always a market for high-rises, but there were no offerings. As such, people never considered high-rise units.”

He notes that while the Kuantan property market is not as vibrant as that in the Klang Valley, having the right product in the right location makes a difference, as seen in the take-up of Phase 1 units.

Most buyers of Phase 1 units are from Kuantan and are a mix of investors and owner-occupiers. For Phase 2, the developer is targeting owner-occupiers, young dual-income families, professionals, upgraders, business people and investors.

Although Phase 1 was completed in 2020, the project may seem to have progressed slowly. Tee explains that a lot of work had to be carried out even after its completion. “We had operational problems with the hotel and we needed to iron out those issues.” For example, the hotel had new additions, such as a bar, restaurant and banquet hall, which hosted many government events. Tee adds that Bina Puri invited architects to pitch concepts for Phase 2 before the company made a decision, which took time.

According to CBRE | WTW group managing director Foo Gee Jen, while high-rises are not a common sight in Kuantan, this could change with improvements in infrastructure and connectivity.

“Generally, the few high-rises in Kuantan are mostly resorts near the waterfront. The preference is  still very much for landed property,” he says.

“The opening of the East Coast Highway about 10 years ago cut down travelling time to 2½ hours, from three to four hours previously. So, this opened up the market for weekend travellers and holiday travel to Kuantan. As a result, serviced apartments and resorts mushroomed in the coastal area. The ECRL will give serviced apartments an added boost, increasing the share of the high-rise market over time.” About an hour’s drive from Kuala Lumpur is The Valley @ Bentong, Bina Puri’s farmland and homestead development. Buyers of these homestead lots can build a small house and get their hands dirty with hobby farming. Phases 1 and 2 — called The Kerau, after the river that runs through the land — have received good response,  and Phase 3 will be unveiled when all the approvals are obtained, says Tee.

Buyers of both phases are mainly professionals, business people, managers, those in their late 30s and older, and young families, and almost all are from the Klang Valley, Tee says.

The main infrastructure for Phases 1 and 2 has been completed and includes road and drainage, water supply, electricity, landscaping and 24-hour security surveillance. The monthly maintenance fee for each lot is RM200 on average and includes security, grass-cutting and rubbish collection services.

“Phase 3 has a lot of flat land. Phase 2 is only 60% sold because part of the terrain is steep,” says Tee, adding that sales of Phase 2 lots rose after buyers saw houses built by other owners on a hill.

He says the company will build a RM2 million clubhouse, for which residents will need to pay a subscription fee to use. Facilities will include a pool, gym and reading rooms, as well as meeting rooms and exhibition spaces. Residents who enjoy nature can also walk along the banks of Sungai Kerau.

According to CBRE’s Foo, demand for Bentong land comes from people who want to escape the hustle and bustle of city living.

“Generally, the land in Bentong is agricultural and near the Klang Valley. The area has a lot of developments for one’s own stay and hobby farming,” he says. “The selling price is affordable, averaging between RM5 and RM7 psf, and a one-acre plot will go for just below RM300,000. This will attract many people who are interested in hobby farms. Demand is moderate and can be seasonal because, when people have extra money, rather than buy a car, they may buy land and enjoy the appreciation over time.”

Besides the two projects in Pahang, Tee says, Bina Puri has two serviced apartment projects that are being planned. It owns two plots of land in the vicinity of the Casa Venicia and Casa Mila high-rises in Bukit Idaman, Selayang. On each plot of about 0.8 acres, there is a clubhouse that was built in the 1980s.Tee says the developer wants to unlock the value of the land by demolishing the existing structures and building serviced apartments with updated facilities.

Asked about the outlook for the overall property market, he says: “I hope for a rebound. I would invite you to take a look at our projects, but it is now MCO 3.0. It is very hard to make predictions nowadays, but I believe that, once things have normalised, the property market will rebound.”