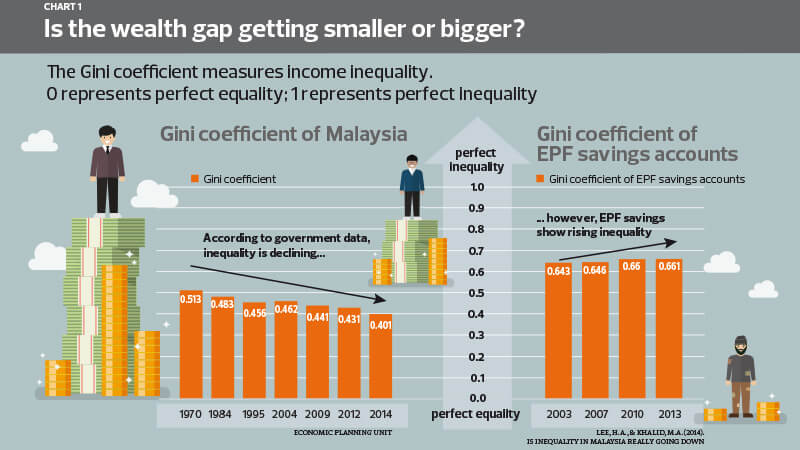 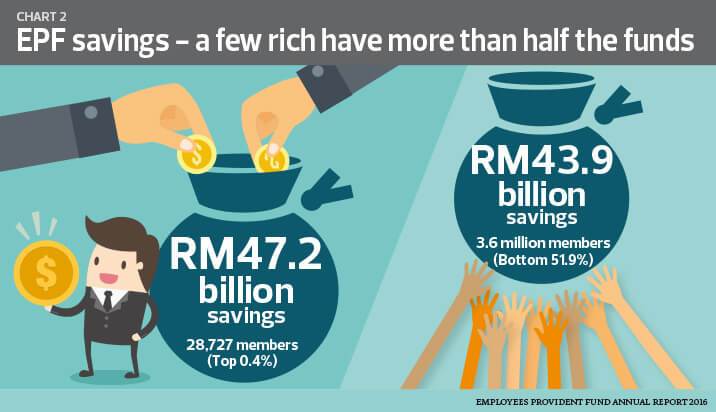 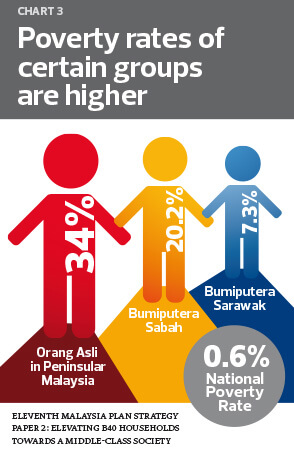 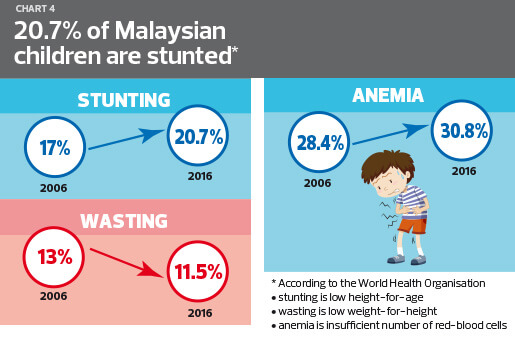 YANTI (not her real name) was afraid to let her teenage daughter go to school. The night before, a schoolgirl had been found hanged in their neighbourhood, a dense collection of low-cost flats in Bandar Sunway, a prosperous township in Selangor. She had been raped and then killed, the mother of two told a researcher who had visited the high-rise complex to survey poverty issues.

Violent crime was an ever-present threat in the neighbourhood, and a lone visitor would not feel safe, The Edge was told in an interview. The previous week, a foreign worker had been stabbed to death in a lift.

The flats house some 30,000 people who had been relocated from squatter settlements in the vicinity.

Not far from this seething cauldron, an oasis of upmarket facilities, featuring leisure, commerce, education and health services, bustles with activity. Sunway City, an integrated development, has it all, from award-winning properties and the world’s largest man-made surf beach to an iconic shopping mall, resort hotels and much more.

This proximity between the poor and rich symbolises the scale of inequality in wealth among Malaysians today, according to Dr Muhammed Abdul Khalid, the managing director and chief economist of DM Analytics Malaysia, a boutique policy research and consulting firm.

The precarious reality of life at the bottom, reflected in the ghetto-like conditions endured by people in poor neighbourhoods, is at extreme odds with the impression of economic growth that is projected by indicators such as the annual GDP growth, which stood at a commendable 4.2% last year and climbed to 5.8% in the second quarter of 2017.

Muhammed argues that GDP growth does not necessarily translate into a corresponding rise in the standard of living for a major segment of the population.

“What matters are not headline GDP figures, but the consequences and effects of economic growth on the rakyat’s well-being,” he says.

For example, in contrast to the bracing pace of economic growth last year, the wages and salaries of Malaysian workers grew less than 1%, or about RM17 in real terms, Bank Negara Malaysia data shows.

Likewise, the 4.2% GDP growth rate is belied by persistent joblessness, which rose 13% last year, according to the central bank.

As may be expected, these sobering realities pose enormous challenges to households, seen in their razor-thin savings rate of 1.4% in 2013, the Khazanah Research Institute reported last year.

In comparison, the US household savings rate, which is generally considered to be very low, is at 5%.

Nevertheless, Universiti Malaya-based development economist Prof Niaz Asadullah notes that Malaysia has taken some steps in the right direction in the past few years.

The raising of the minimum wage to RM1,000 in Peninsular Malaysia was a positive measure as it increased labour’s share of GDP by 7.7% to 35.3% in 2016, according to data from the Department of Statistics.

Secondly, Malaysia’s ratio of direct to indirect tax of about three times is much higher than that of many other countries despite the introduction of the Goods and Services Tax (GST) in 2015, Niaz notes. The higher proportion of direct taxes makes the system more progressive as there is a lower tax burden on the low-income group.

Other factors that have lessened inequality in Malaysia include a narrowing gender pay gap, which is the 12th lowest in the world, according to the latest 2017 survey by the World Economic Forum. Despite this, the country is ranked 104th out of 144 countries in terms of overall gender equality, and a particularly low 133rd in political empowerment of women.

Also, the central bank has successfully arrested the inflation rate, having kept it under 6% since 2010.

Bottom of the barrel

However, a further enquiry into the issue of savings and inequality reveals the serious vulnerability of a large segment of the population.

On the one hand, the Gini coefficient, a measure of inequality, has steadily declined — from 0.513 in 1970, when the New Economic Policy was introduced, to a historic low of 0.401 in 2014, Economic Planning Unit figures show (see Chart 1). On the other hand, there are indicators that reveal a rather grim reality.

A highlight of the study is that the top 0.4% of EPF account holders have more money than the bottom 51.91% combined.

Moreover, Bank Negara data shows that only 1 in 10 Malaysians can survive more than six months if they lose their main source of income.

Average savings in the ASB accounts of the bottom 73% stand at just RM538 while that of the top 0.2% amount to RM778,000. The scenario that emerges from this analysis is quite dire.

One element is that while absolute poverty had declined from a peak of 49.3% in 1970 to 0.6% in 2014, poverty rates remain high for specific groups, especially the Orang Asli in Peninsular Malaysia, 34% of whom remain below the poverty line (see Chart 3).

Another aspect of the issue is that children are especially vulnerable to the effects of poverty. In tandem with the national poverty rate, the incidence of children living in poverty had declined from a substantial 29.3% in 1989 to just 2% in 2014.

Yet, a single adjustment to the official poverty line income — an average of RM930 per month per household of 4.3 persons in Peninsular Malaysia — reveals a rather different picture. If the Poverty Line Index is doubled to RM1,860, 15% of all children would fall into such households.

The implications for children’s well-being are rather worrying as seen in the prevalence of stunting, wasting and anaemia (see Chart 4).

The extent of the problem can be better understood if it is noted that half of the workers in Malaysia earn less than RM1,703 per month.

The costs of inequality

These inequalities hold serious costs, not just for the poor but also for the economy and society as a whole, say development institutions.

“High and rising inequality can curb medium-term growth by reducing social cohesion, undermining the quality of governance and increasing pressure for inefficient populist policies,” the Asian Development Bank says in a 2012 report.

“Inequality, especially deprivation, may intensify the grievances felt by certain groups or can reduce the opportunity costs of initiating and joining a violent conflict,” another 2014 World Bank report warns.

Universiti Malaya’s Niaz observes that perceived inequality is stronger in urban areas where the underprivileged are exposed to the lifestyles of the upper class.

In a heterogeneous society such as Malaysia’s, this is even more likely to lead to social and political flare-ups, especially when the causes of such inequality are not clear, Niaz says.

Closer to home, Singapore has had to face up to the erosion of public support for the government in the wake of rising inequality.

Policy analyst Donald Low writes in “Hard Choices: Challenging Singapore’s consensus”: “… we should question whether the economic performance of countries should be measured only in terms of income (or per capita GDP) … Various economists have therefore suggested that governments, in measuring economic progress, should also take into account other indicators of well-being ... By these measures, Singapore does not do as well as its per capita GDP suggests.”

Niaz highlights that Indonesia’s government has also been taking its issue of inequality more seriously by encouraging public discussion. The country’s 2017 Gini coefficient matches Malaysia’s at 0.39 (2016), although wealth inequality in the archipelago is higher and it suffers greater regional disparities.

While income inequality is actually high in OECD countries, Niaz notes that the redistributive tax system in several of these countries has helped rebalance disposable income available to the population.

However, Malaysia spends less than 5% of its GDP on social expenditure compared with over 20% spent by OECD countires, according to a 2016 OECD economic survey.

Muhammed argues that the time has come for relative poverty instead of its absolute measurement to be used as a yardstick of the population’s well-being.

Relative poverty, to use the United Nations’ definition, refers to the inability of individuals, households, families or entire communities to attain a minimum and socially accepted standard of living.

The implications are clearly much more far-reaching with this broader definition instead of one that is merely based on an income level.

In any case, says Niaz, a more democratic debate on inequality is required. The government needs to listen to the people about how they feel unequal. Painting only one picture using official statistics is counterproductive, he says.

A key takeaway, says Muhammed, is that Malaysia must focus on inclusive growth instead of merely aiming to become a high-income nation.

A 2016 report on the challenges of urban poverty and building an inclusive nation by Universiti Kebangsaan Malaysia’s Institute of Ethnic Studies (Kita) points the way forward.

Summing up a series of national dialogues to examine the challenges of the urban poor and bottom 40% of households, the report’s editor, Datuk Dr Denison Jayasooria, principal research fellow at Kita, called for a national strategy to be developed to address the concerns and issues of this underserved group.

It is a message that is crying to be heard.

In his best-selling book The Colour of Inequality (2013), Muhammed writes frankly: “The future does not look rosy for Malaysia; the current policies are encouraging wealth disparity between rich and poor, and between ethnicities ...

“Unless bold and drastic actions are taken urgently, a harmonious future for Malaysia is uncertain. There must be an urgency to give every Malaysian economic security, a better and sustainable future that is essential for a stable, harmonious and prosperous society.”

Speaking to The Edge, Jayasooria underlines the need for disaggregated data on the distribution of wealth to be readily available in order for accurate analyses to be carried out on the nature of inequality in society and to identify its root cause.

The problem, in a nutshell, is that due to the dearth of such information, a cross-cutting, integrated approach to redistributive justice is lacking in the country.

The government needs a team of multi-ethnic and multi-disciplinary experts to formulate an effective strategy to address the complex issues involved in addressing inequality, Jayasooria says.

A community development strategy that includes programmes to help people to get out of the depressing environment of low-cost tenements is clearly needed.

The first step in that direction may well be a willingness to face up to the desperate reality of the multitudes at the bottom.