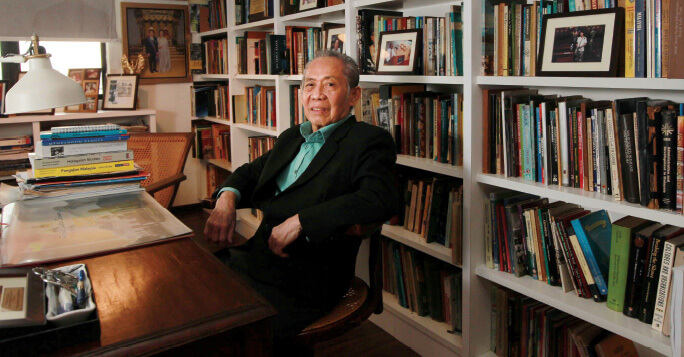 Khoo in his study, surrounded by a treasury of books 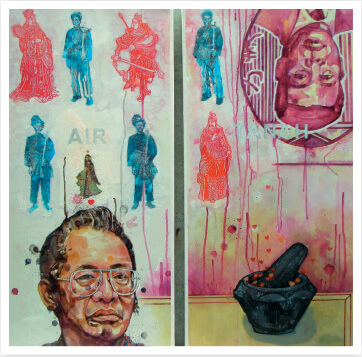 In anticipation of I, KKK, the autobiography of Prof Emeritus Tan Sri Khoo Kay Kim that is being officially launched this week, his son Rubin Khoo pays a very personal tribute to the eminent historian

Some may find it odd that I am writing this piece, paying tribute to my father, the eminent historian Prof Emeritus Tan Sri Khoo Kay Kim. Many would feel my elder brother, Eddin, well known for his efforts in preserving traditional art forms, would be in a better position to do it. Even I suggested that Eddin should be the one writing since he knows our father best, and since it is through his efforts that my father’s autobiography, I, KKK, launched in conjunction with his 80th birthday, is being released. Their paths often cross due to the nature of their work, which has largely focused on the socio-cultural.

I, on the other hand, have always been perceived as being somewhat different. A member of the MTV Generation, my interests always seemed to lie in more frivolous matters — fashion, popular culture and magazines — rather than books. This has carried on until today where, in stark contrast to Eddin’s more “serious” work, my life seems to centre around events and socialites, writing about lifestyle and trends. Of the professor’s three children, I guess I was the one who was most concerned about appearance. Perhaps it is true. As a child, I feared that I had inherited my father’s broad nose, in contrast to my brothers who were both blessed with our mother’s sharp nose. But it is at our noses that the physical similarity between my father and me ends. We are in fact direct opposites. I am 5ft 10in while my father stands at 5ft 4in. Both my brothers are of similar stature. Growing up, my father sensed that of his three sons, I would be the one to surpass his somewhat diminutive size. As a result, he used to feed me calcium tablets to boost my growth. Unfortunately, I never reached the 6ft that he hoped I would.

It is perhaps because of such differences that people are often surprised that I am the son of this well-known historian whose textbook was used in school. Yes, that happens even today. It did not happen as much when I was in school as I went to La Salle where my mother (Puan Sri Rathi)  was one of the stalwarts and our relationship was known. Years later, when I began my career as a broadcast journalist with TV3, the editors thought it amusing that I should be sent to get the professor’s comments on social issues. It was always highly entertaining for the crew to see us together. On the way back, I would be quizzed on what it was like to have an academic as a father. That continues today. In fact, only a couple of days ago, I was asked that very same question.

It surprises many to learn that my brothers and I had a very liberal upbringing. We were not restricted in any way. We could watch as much TV as we wanted and eat any kind of junk food out there. Ponytails, piercings and tattoos were all considered part and parcel of growing up. We were and are a family that fights a lot but at the same time, I think we don’t. Our fights were never the typical father-son arguments about not being able to go out or not being given the licence to explore life. Instead, our disagreements centre on politics and world affairs or turn into philosophical debates about right and wrong. Whenever we go out to dinner, my mother is always slightly apprehensive that a simple discussion about current issues might quickly escalate into a shouting match that would shock others in the restaurant. They probably think we are being rude but they would be wrong. It would be about the freedom to discuss and that would be the opinion of my father too.

His style of “managing” us was always quite different from my mother’s, who until today laments that her children have taken the unconventional path. To my father, the more unusual the choice, the better. He is probably the only parent out there who is extremely proud that he has no lawyers, accountants or engineers in the family. Eddin studied political philosophy, I read social psychology and it was a given that Mavin, the child prodigy dancer, would study performing arts.

From my choice of academic discipline, it can be said that I was quite an introvert. I saw myself as someone who would not thrive in the public eye and chose to opt for a career that would focus on my interpersonal skills. I believed that my temperament made it more suitable for me to explore a career as a counsellor or teacher. Journalism never crossed my mind and I wasn’t even aware that I could write. I taught at a local private college for a year before my dad secretly arranged for an interview and audition at TV3. At the time, he felt that I wasn’t living up to my potential and that with my “looks”, I could probably have a career as a TV presenter.

I wasn’t exactly thrilled by the idea because I believed that I suffered from stage fright. But it was probably the only time that my father forced me to do something. Seeing that I have spent the last 20 years as a journalist, I guess he must have done the right thing by steering me in that direction.

It probably sounds cliché but to my father, living up to one’s potential is the most important thing and it had nothing to do with academic performance. Most people find it quite shocking when I say that he really wasn’t concerned about how we performed at school. It could be that academics have a more idealistic view of education, believing that it should be about provoking new ways of thinking rather than just reciting information on command.

This perspective emerges time and time again in his autobiography, along with his frustration that such a seemingly simple philosophy has yet to be implemented in our schools. It is his opinion that most of our problems can be solved by tackling the education system.

I have always found it quite hard to read my father. Perhaps, a man of his generation isn’t supposed to express himself, articulate what he is feeling. Even today, he seems more comfortable dealing with the question of what he is, in terms of the roles he plays in public life, rather than who he is as a person. To him, talking about history, football, society and so forth is much easier than talking about his emotions.

It is perhaps because of this that going through his autobiography has been quite enlightening. His views on education, society and government have all been articulated throughout his many years as an academic. We know what he thinks and what he stands for but it is the person who has always been somewhat elusive.

It is for this reason that my family quite enjoyed perusing the early drafts of the book. My father is a man of many quirks, many of which have remained inexplicable, at least to me. One of them is his habit of collecting newspapers. If he sees any abandoned newspaper, he will surely pick it up and bring it home. A few days later, my mother would quietly dispose of it, saying that he would not even notice its absence. Months later, he would be looking for that very newspaper. They have been playing this game for years. My father’s study at our house in Pantai Hills was quite legendary. There was only one path, unencumbered by the piles of newspapers that lay on the floor, to his table where his typewriter was placed. He only stopped using the typewriter in the 1990s when he did a short stint in the National Technological University in Singapore. The banging of the keys, he was told, was distracting the rest of the staff.

My father’s study was out of bounds to my mother. Years later, when we moved out of Pantai Hills, it took four “paper lama” lorries to cart away the newspapers. My father was a sad man that day. I always believed this obsession was an eccentricity but when going through the book, I discovered that his love for the medium was deep. He describes his great joy at spending hours at the library, perusing the pages. His conviction that newspapers are a good source of information remains unshakeable. It is perhaps because of this that he has been drawn into controversy on many occasions despite often having been misquoted. Yet, he continues to oblige the same publications, not believing that some media do have agendas and that they are prepared to intentionally misrepresent one’s comments to achieve their own objectives. My father is quite idealistic in that way, or perhaps, some would say, naïve.

I am not sure if we had an unusual upbringing. I think not, as my brothers and I had a happy childhood despite the fact that we were spirited and had frequent disagreements. We were a family that loved food and we would nearly always have dinner together. In our teens, supper became a norm and we would head to Lucky Garden for hokkien mee practically every night, before we went to bed.

It was probably in the eyes of others that we were “unusual”. That, of course, had a lot to do with the fact that my parents were of different ethnicity. A mixed marriage was uncommon at the time and we used to be stared at when we went out as a family. However, I don’t remember being teased for being “mixed”. In fact, I always thought it was special. Nonetheless, I have always wondered what it was like for my parents, particularly my father, who doesn’t seem to be the romantic type.

Until now, the kind of hurdles they had to go through have only been fleetingly mentioned or made the subject of humour at family gatherings. But now I realise that things were really quite difficult for them in their early years of marriage. I never knew, for example, that for a time, my mother was the sole breadwinner while my father worked on his master’s.

Finally, my father admits that he first met my mother when she was a student in his class. When we were growing up, he always said that they had met when she was a temporary teacher at the Anglo Chinese School in Teluk Anson. She was very pretty, he says, and gentle. “There was something special about her,” he writes. My mother has always complained that my father rarely pays her any compliments, so this very public declaration is probably a first.

I get a sense of their courtship in the book. While proofing a chapter on their relationship a couple of nights ago, I asked my mother what they talked about on their dates. “We would just talk about our day,” she said, adding, “Your father is a very good man, a kind man.”

I, KKK — The Autobiography of a Historian (ISBN 978-967-14930-0-7)will be officially launched by DYMM Paduka Seri Sultan Dr Nazrin Muizzuddin Shah on April 12 and is available at all major bookstores at a recommended retail price of RM60.