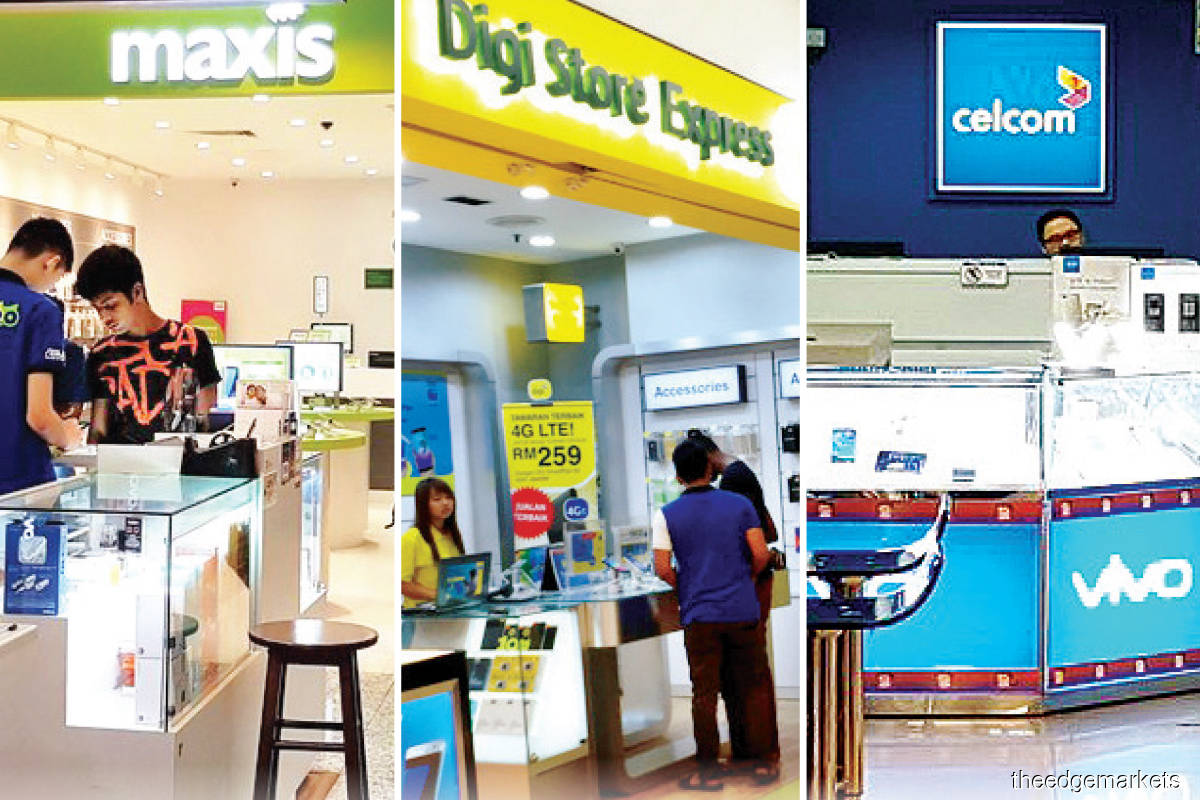 And the two worst-performing stocks among the four largest listed telcos are Maxis Bhd and Digi.Com Bhd, which paid their shareholders nearly all the profits earned for FY2021 and are among the handful of counters that pay dividends every quarter.

In fact, not only did Maxis maintain its dividend payout at RM1.33 billion or 17 sen per share for FY2021 — the same as FY2020, despite net profit coming in 5% lower year on year largely due to higher depreciation — it actually paid slightly more than 100% of earnings last year and continued to do so in the first quarter of 2022 (1Q2022).

The dividend of five sen per share that Maxis declared for 1Q2022, which came up to about RM391 million, was a 131% payout — trumping its net profit of RM298 million (3.8 sen per share) for the quarter that reflects a higher tax rate due to the one-time 33% Cukai Makmur prosperity tax on chargeable income above RM100 million for the assessment year 2022 (instead of 24% corporate tax) announced in Budget 2022.

Maxis also paid more than 100% of net profit in declaring a dividend of five sen per share for 4Q2021, when earnings per share was 3.7 sen.

That’s slightly ahead of the 17% YTD share price decline seen for Axiata Group Bhd, whose Malaysian mobile unit, Celcom, is awaiting regulatory approvals to merge with Norwegian Telenor ASA’s 49%-owned Digi.Com. Closing at RM3.45 on May 10, Axiata too had lost about RM7.3 billion in value YTD, giving it a market cap of RM30.8 billion at the time of writing, with total return at -15.9% YTD.

Even Telekom Malaysia Bhd (TM), the best performing among the four largest Bursa Malaysia-listed telcos, has lost RM2.6 billion in value as its shares slipped 9.45% YTD to close at RM4.98 on May 10, giving it a market capitalisation of RM18.1 billion. Total return for TM, which pays dividends twice a year, was -8.3% YTD, Bloomberg data show. Analysts’ target prices range from JP Morgan’s RM3.60 to Macquarie’s RM7.70, averaging at RM4.98 at the time of writing. There are 20 “buy” recommendations, versus two “hold” and three “sell” calls.

Time dotCom Bhd — which does not have mobile phone operations but has fibre broadband customers and serves the enterprise market — saw its shares ease only 2% YTD to close at RM4.48 on May 10, giving it a market capitalisation of RM8.2 billion.

Persistent uncertainties over 5G and how it would change industry dynamics do not help. Investors who subscribe to the “sell first, ask questions later” mantra probably contributed to the massive decline in stock price that began last year.

While the government had on March 16 this year decided to go ahead with a single wholesale network (SWN) model to accelerate the rollout of 5G in Malaysia, its decision to cede up to a 70% stake in Digital Nasional Bhd (DNB) also raised new questions over what was previously a clear-cut change in industry structure and decision-making process when DNB was set up in March last year.

Even though the government said negotiations on ownership, equity value and other aspects of the proposed 70% equity participation in DNB by telcos are targeted to be concluded by end-June, it remains to be seen if meaningful progress can be made and publicly disclosed in the next seven weeks.

Indications are that little progress had been made since April 8, when the four mobile network operators (MNOs) that had previously lobbied to jointly own a second 5G wholesale network — Celcom Axiata Bhd, Digi Telecommunications Bhd, Maxis Bhd and U Mobile Sdn Bhd — issued a joint statement to say that they “remain in discussions” with DNB and the Malaysian Communications and Multimedia Commission but have yet to agree on key terms of the recently published reference pricing offer or RAO. The latter, they say, is a key step before discussions on commercial access agreements can commence.

It was because of the lobby that the government — which had initially planned to keep 100% equity in DNB until 5G network infrastructure rollout reached 80% in 2024 — decided to cede 70% stake to the MNOs earlier, in the name of public-private partnership in the 5G rollout.

It is also not immediately certain if the government — which affirmed that DNB will continue to be run on a “cost-recovery” and “supply-led” model — will continue to have the final say in the speed and quality of rollout with its minority 30% stake in DNB plus a golden share. It is also not immediately certain whether the 70% stake will be split equally among all mobile network operators (MNOs) who sign up for access and commit to taking up 5G wholesale capacity from DNB, and if DNB will continue to be managed independently from the telcos without being swayed by the profit-leaning collective 70%.

What is clear is that telcos will naturally continue to fight to pay less money to DNB upfront as well as for 5G wholesale access to protect their earnings, which, in turn, affects their ability to pay dividends to shareholders and their share price performance.

The larger impact on earnings from 5G wholesale payments to DNB is expected to start next year, given that DNB is giving free access to its network at least until end-June and network rollout is only targeted to reach about 40% by year end, before expanding to 70% by end-2023, 80% by end-2024 and 90% by 2027.

While there will be savings from network sharing, the fact that DNB was created to fulfil the government’s desire to accelerate 5G rollout and expand coverage on a “supply-led” basis, to reach even areas that telcos would likely not roll out 5G on their own until there is more certainty of take-up, means there will be additional cost that will shave off some of the savings from network sharing.

DNB previously said there would be a minimum that all MNOs will have to commit to paying as the network coverage is built, including for areas that telcos may not be able to immediately monetise. Beyond this basic commitment, MNOs that use more will be charged for additional capacity.

The size of this minimum commitment from each of the MNOs is likely to be among the largest hurdles to getting buy-in from the four larger mobile operators — Celcom, Digi.Com, Maxis and U Mobile — which have yet to join Telekom Malaysia Bhd and YTL Communications Sdn Bhd (YES) in signing service agreements with DNB.

DNB had previously said its 5G network would cost RM16.5 billion to build and run over 10 years, including RM4 billion “corporate costs”, which analysts reckon can be reduced.

Simple back-of-the-envelope calculations show that the RM16.5 billion works out to RM2.75 billion per MNO, if split six ways. Even if each of the telcos only has to pay RM275 million a year to DNB for 10 years, this amount would likely be bigger than the impact of Cukai Makmur on their respective bottom lines this year.

Indeed, earnings-related issues are not limited to these taxes and 5G wholesale payments alone.

Investors have already seen the impact of Cukai Makmur on Maxis’ and Digi.Com’s first-quarter results, while TM and Axiata will announce their respective 1Q2022 earnings on May 25.

That’s not to say Maxis cannot maintain a 17 sen dividend this year or continue to pay a dividend of five sen per quarter for the rest of this year. It needs RM78.3 million to pay every one sen of dividend.

Since Maxis continues to be profitable and has more than RM4 billion retained earnings in reserves, even without touching its share capital that can also be returned to shareholders, it can continue to pay more than 100% of its earnings, subject to its investment needs.

Maxis — which needs about RM1.3 billion to maintain the dividend of 17 sen per share it paid in FY2020 and FY2021 — has at least RM1.8 billion (23 sen per share) debt headroom before its net debt to Ebitda (earnings before interest, taxes, depreciation and amortisation) rate breaches the palatable threshold of three times, with the ratio rising from 2.2 times at end-2021 to about 2.5 times as at 1Q2022, our back-of-the-envelope calculation shows.

Even if Maxis’ earnings were to slip to RM1.6 billion for FY2022 before taxes, it would still make more than RM1 billion profit, or around 13 sen per share, available for distribution after paying Cukai Makmur. The earnings available for dividend rises close to 16 sen if Maxis can maintain pre-tax profit at around RM1.8 billion.

Over at Digi.Com, much depends on its impending merger with Celcom. As it is, Digi.Com’s net debt to Ebitda levels is much lower, at only 1.6 times, but its shareholders’ equity is also a lot lower at only RM565.7 million as at end-March, after deducting about RM200 million accumulated losses given that it had returned capital to shareholders in 2005 and continued to be generous on dividends.

In any case, with mobile penetration at over 144% and competition heating up for the home broadband as well as the enterprise market, all players would be hard-pressed to up their game to retain subscribers and win new customers.

TM managing director and CEO Imri Mokhtar tells The Edge that is it conserving some cash for investments in its future, including acquisitions to bolster its enterprise portfolio (see “On the prowl for M&A, JV to grow new digital services unit Credence” on Page 53).

The fact that Maxis has begun to report enterprise revenue on a standalone basis “suggests that management is now more confident about the segment’s prospects”, Maybank Investment Bank Research analyst Tan Chi Wei wrote in an April 29 note, retaining a “hold” recommendation and RM4.20 target price.

Whether or not analysts are right about mobile operators’ ability to continue paying good dividends this year despite Cukai Makmur, their stock prices would continue to be weighed down if uncertainties surrounding 5G persist longer than end-June. Delays would ultimately hit the people and the country’s economy, which desperately needs to move up the value chain.