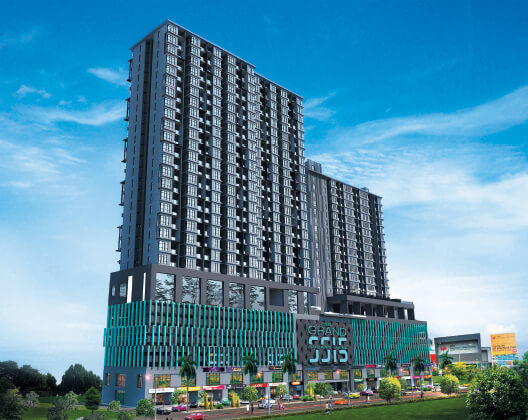 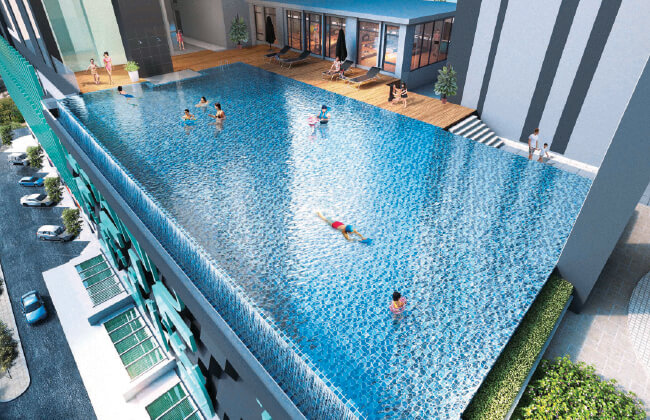 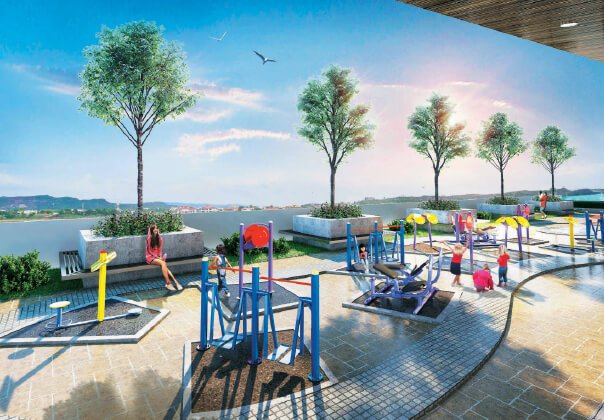 An apt place to study, exercise and socialise 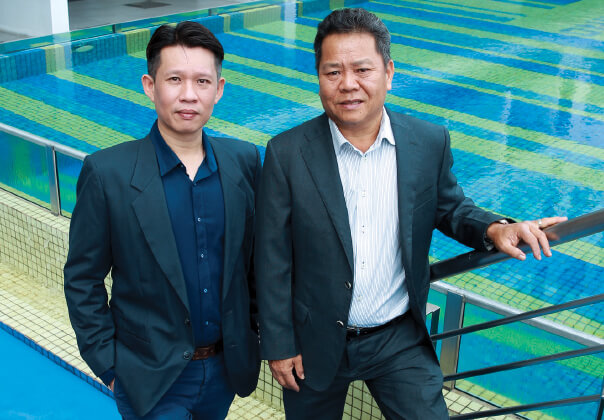 Tucked away in the bustling neighbourhood of Subang Jaya, Asia Café in SS15 was a popular food and entertainment establishment for more than 14 years. Located near INTI International University & College Subang, Asia Café comprised over 100 food stalls, an internet café and a snooker centre. Situated on 2.05 acres, the 60,000 sq ft food court was once a vibrant happening place that attracted large crowds of patrons and students from the area on a daily basis.

Built in 2003, Asia Café was able to sustain its business because of its strategic location, although its building had grown old and number of visitors had dropped over the years. Today, Asia Café has been reduced to debris as it was closed down last year and demolished last month. Landowner and boutique developer, Mediaraya Sdn Bhd, reveals that the site has been earmarked for a small office/home office (SoHo) development called Grand Subang Jaya.

“We would like to be the first to introduce to investors a SoHo development in the area, which is specially designed for young adults and students from the nearby university,” says the company’s chief operating officer, Mark Choo. “We believe this concept will appeal to our target market and is something that is needed in the SS15 [commercial centre] area.”

Mediaraya was founded by Datuk Stanley Cheah Suan Lee in 2005. Its notable projects include small office/flexible office (SoFo) developments Grand SOFO at Kelana Damansara Suite and Grand Subang in SS13. Mediaraya also owns the Asia Café chain in well-populated areas around the Klang Valley, such as Kota Damansara and Puchong.

The developer first revealed its plan to pull down Asia Café in November 2016, surprising Subang locals who were accustomed to the landmark.

Cheah acknowledges Asia Café’s fame and value but maintains that redevelopment is the best decision for the site. “For a while, we did plan to retrofit it but considering the changing trends and warm weather, we felt it would be best to redevelop and include air conditioning in the new development.

“Upon observing the site, we saw the need to accommodate the students in the area and to also alleviate some of the traffic [by providing parking bays], something that SS15 is notorious for.” There will be 770 parking bays in the project.

“It will also be beneficial to the area to have a SoHo project that offers students a convenient and safe living space. Currently, they mostly rent rooms in nearby shophouses, houses [with converted rooms and layout] and condominiums. We would like to offer them alternative accommodation,” Cheah adds.

Grand Subang Jaya has a gross development value (GDV) of RM277 million and is expected to be launched in the middle of the year. The freehold project will offer 483 SoHos that are now open for registration. All the units will have a standard built-up of 563 sq ft and will be housed in two towers, one 21 storeys and the other 14 storeys high. The layout of the units, which are priced between RM478,000 (RM850 psf) and RM525,000 (RM935 psf), and the project’s completion date will be disclosed closer to the launch date, Choo says.

“Our units are affordable and we are targeting investors. Young investors will be attracted to the idea and the prices are not out of their reach. And due to the nature of the product [and the strategic location], we believe this is a safe and viable investment,” he says.

Mediaraya recognises the site’s potential for a student-friendly development and is banking on the thriving SS15 area.

According to Choo, Grand Subang Jaya’s biggest selling point is its location. “The development is located so close to INTI International University & College Subang. We are confident that our investors will gain steady returns from it.”

Choo also sees the development as a welcome addition to the area, offering students a place to study, exercise and socialise. The facilities will include a swimming pool, basketball court, basketball half court, multipurpose hall, mini-futsal court and a gym to exercise the study stress away.

Additionally, Grand Subang Jaya will have its own food and beverage joint to replace Asia Café. “This will be significantly smaller (about 24,000 sq ft). It will be a self-service joint with air conditioning. In fact, we are inviting a few of Asia Café’s former stall operators to set up shop at the new place,” says Choo.

Security will be an important aspect of the development. “The building will have security guards and there will be CCTV in the common areas. Its lifts will also be operated by cards to ensure the safety of its residents. There will also be a shuttle bus service,” Choo adds.

In terms of design, Grand Subang Jaya will have a no-fuss, minimalist feel. The two towers will have a simple, modern façade with clean lines while the units will have low-maintenance fittings, such as veneer flooring and tiles.

In terms of connectivity, the development is linked to the Federal Highway, Damansara-Puchong Expressway, New Pantai Expressway and Shah Alam Expressway.

The rise of SoHos

The managing director of property consultancy One Sunterra Properties Sdn Bhd, Sara Lai, believes Grand Subang Jaya is ideal for its location. “It is well suited to both the student and working populations as it is located next to INTI International University & College Subang in SS15 and other nearby universities. The concept will appeal to the lifestyle of students and young working adults.”

According to Lai, the best-selling properties in Subang Jaya are 2-storey terraced houses and condominiums.

“Napic’s data of property transactions (3Q2017) indicates that of the 3,743 residential units transacted in the district of Petaling [where Subang Jaya is located], about 31% (1,178 units) were 2 to 2½-storey terraced houses while 30% (1,139 units) were condominiums or apartments,” she says.

LaurelCap Sdn Bhd director Stanley Toh opines that there is favourable demand for SoHos in Subang Jaya. “Demand for [this type of development] is quite strong. [The same applies to Grand Subang Jaya], especially since it will be near INTI International University & College Subang as investors will be able to tap the student market. The location is strategic,” he says. “Similar developments in nearby areas are The Suave and Subang Jaya Commercial Centre by Sime Darby Property.”

Lai concurs. “[This type of property] has gained in popularity in the last five years, for example, SoHo developments such as Subang SoHo (One SoHo) and First Subang by Titijaya Land Bhd. Occupancy and rental rates are favourable due to the lower-end pricing and bite-sized units, and their proximity to commercial centres and facilities. For example, First Subang is located on top of SS15 Courtyard.”

According to her, the average price of SoHos is between RM800 psf and RM900 psf. “Monthly rents for SoHos in Subang Jaya are between RM2.80 psf and RM3 psf with yields of between 3.5% and 4.5%,” she says, adding that Grand Subang Jaya will most likely attract small families, young couples and young working adults who already live or work in Subang Jaya and the surrounding areas as well as investors.

“Grand Subang Jaya will attract investors who are buying to rent to students, the working population as well as parents buying for their children studying in nearby colleges and universities.”

On the key drivers of the development, Lai says, “A catalyst will be new infrastructure such as the Kelana Jaya Line Extension and Sunway BRT. The impact of the LRT extension was seen when Prasarana awarded the contract at the end of 2010 (property prices saw double-digit gains year on year in 2011 and 2012).

“However, we have yet to see any significant impact on property prices from the recent completion of the LRT extension. This could be due to weak property market sentiment and slower economic growth.

“Another catalyst is the presence of a young population, for example, tertiary students in nearby private colleges, universities, young working adults within the Subang Jaya locality and surrounding areas such as Shah Alam and Petaling Jaya. Others include the vibrant commercial areas that offer amenities and services, such as the SS15 commercial centre and Taipan Business Centre.”

Toh lists the area’s heavy traffic and high population as some of its challenges. Nonetheless, he says the prospects for SoHo developments in Subang Jaya are promising. “The outlook for SoHos is positive but not bullish. Current market conditions are still bleak [and this will probably persist for] the next two to three years. Still, in the long run, [such] properties in Subang Jaya will flourish.”

Lai says, “With the scarcity of sizeable land in sought-after locations such as Subang Jaya, it is anticipated that SoHos in good locations and that are freehold will continue to appeal to the young population looking for affordably priced properties conveniently located close to shops and facilities as well as train stations.”

According to Mediaraya’s Choo, the company does not have any immediate plan to launch other projects due to weak market sentiments.

“We don’t have plans to develop our land bank. We own a few pieces of land in Penang (one to two acres), Kuala Selangor (14.5 acres) and Kuantan (500 acres). However, we would like to acquire more land in Petaling Jaya and Subang Jaya in the future,” he says.

Mediaraya launched Grand SOFO at Kelana Damansara Suite in June 2013. With a GDV of RM190 million, the two-tower development boasts 430 SoFos with built-ups of 370 to 1,100 sq ft and prices that start at RM680 psf. The project was completed in June 2016 and is fully taken up.