Cover Story: What does the future hold for PJ Old Town? 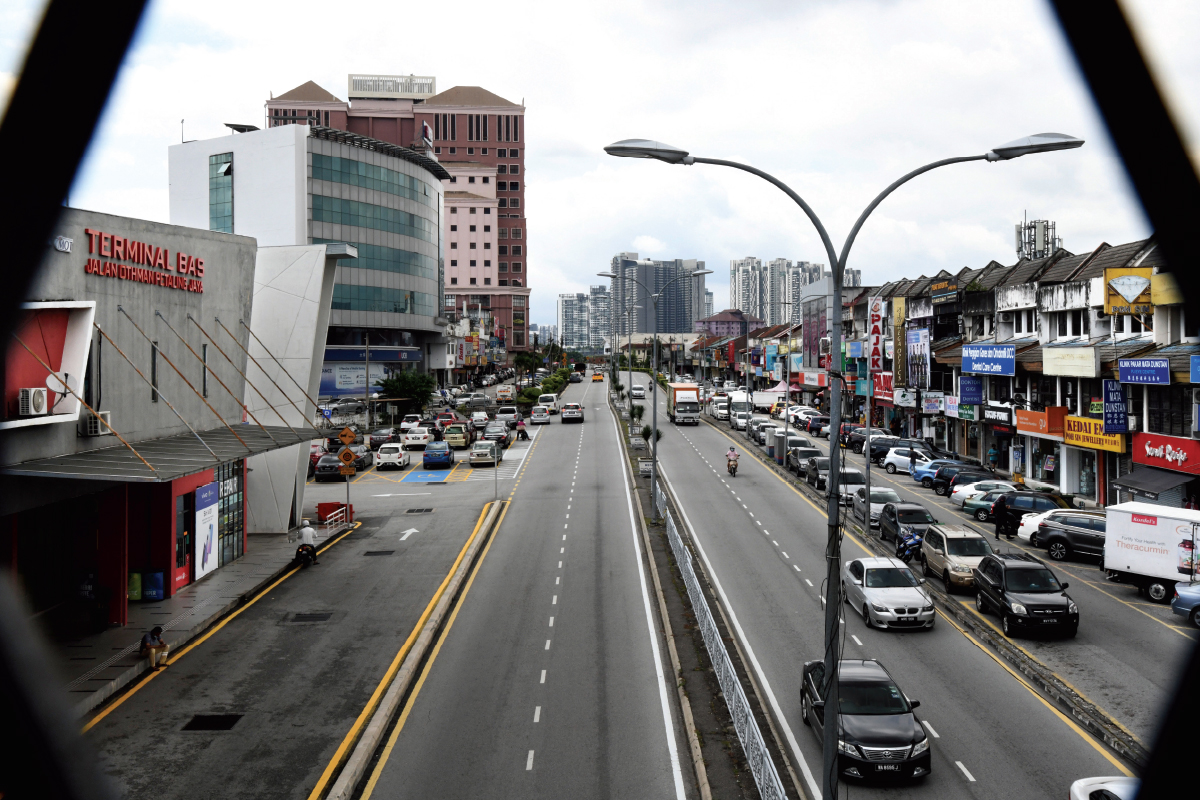 What does the future hold for PJ Old Town? (Photo by Patrick Goh/The Edge)

Thomas, who is in his early forties, remembers visiting Petaling Jaya’s Old Town when he was a child because his grandmother lived in Section 3 at the time.

“In my student days, I would frequent Taman Selera, next to the wet market. That was our go-to place for cheap and good food. What I liked about PJ Old Town was its close-knit community,” he recalls, adding that it was a place where everyone knew each other’s name.

“Also, I learnt that you could get anything you wanted there. It was like a hypermarket — whether you were looking for cooking utensils, ribbons or even toys. One Christmas Eve, I went to a toy shop and bought a Christmas tree with lights and music, and brought it home.”

The area has become more vibrant over the years, thanks to new outlets such as Mr DIY, says Thomas. Incidentally, the home improvement store is managed by an old friend of his.

PJ Old Town, covering an area of 392.88 acres, includes Sections 1, 2, 3 and 4, and is the oldest part of Petaling Jaya, which was built as a satellite town to alleviate overcrowding in Kuala Lumpur in 1952 by the British. The main roads in the town are Jalan Penchala to the west, Jalan Templer to the north and east, and Jalan Railway 1/2 to the south. “The local population in PJ’s Section 1 to 3 are mainly Chinese whereas in Section 4, they are mainly Malays. The population is shrinking and ageing, with the younger generation moving out of the area due to the dated amenities and environment,” says See.

“The area is also famous for eateries that have been there for many years such as Kie Kee Chicken Rice & Porridge in Taman Selera; Heng Kee Bak Kut Teh in Jalan 1/10; Tai Wah Kopitiam in Jalan Othman opposite the wet market; Restoran Jin Xuan Hong Kong in Jalan Pasar 1/21, where you can get dim sum; and Sri Ganapathi Mess for Indian food in Jalan 1/10,” he says.

Laurelcap Sdn Bhd executive director Stanley Toh says, “The property landscape is predominantly old 1-storey bungalows, about 50 to 60 years old, and 2- to 3-storey shophouses along Jalan Othman. The leasehold land has a tenure of 60 years.”

According to CCO & Associates (KL) Sdn Bhd director Chan Wai Seen, “Old Town is the earliest development area in Petaling Jaya. The developments were mainly fuelled by the spillover from Kuala Lumpur.

As the area is quite mature, new developments are rare. Most of the projects are refurbishments of individual houses and not large developments.

“We have noted that many applications are for bungalows to be converted into religious institutions, while limited commercial zoning has opened up to full commercial zoning under the PJ 1 Structure Plan,” says Laurelcap’s Toh.

“There is also speculation about the revival of the Kinrara-Damansara Expressway (Kidex elevated highway), which will run above Jalan Penchala. In addition, the land that was previously zoned for limited commercial use has been allowed to go full commercial.” According to Metro Homes’ See, the lack of development in PJ Old Town is related to the number of years left on the tenure of the leasehold land, which expires after 60 years, as each plot is individually owned.

For homes that are owner occupied, the owner can renew the title and extend it to 99 years by paying RM1,000. However, if the property is sold, the new owner will need to pay the market rate before the transfer is allowed, which is a 25% premium to the increased value of the land, excluding the building.

See notes that because some of the homes do not have many years left on the title,  for instance, less than five years, some owners have been known to let go of their property for RM300,000 to RM350,000, depending on the condition of the house.

“The last project in the area was the demolition of the old bus terminal and the building of another bus stop in 2018 which, for the locals, is another white elephant and a waste of resources, as the project fails to address the traffic congestion at the traffic lights and does not address the shortage of parking lots,” says See.

When it comes to redevelopment, he points to Taman Selera and the wet market. He believes that a if carefully planned, a high-rise development that integrates the food court and wet market would be ideal. He cites the example of Seventeen Mall and Residences in PJ’s Section 17, where the existing wet market was integrated into the design of the development.

See also points out that the draft plan that allows PJ Old Town plots to be converted to full commercial use will have an impact on the area. “The change in land usage is important because under  limited commercial [zoning], the title is still residential and subject to approval by the authorities on what type of commercial activity is allowed, with a yearly renewal fee paid to MBPJ (Petaling Jaya City Council), whereas with full commercial zoning, the land owner can convert the title to commercial by only paying a premium.”

There are some guidelines in the draft plan, such as building setbacks, that may discourage commercial development.

“We believe that the number of people who apply for commercial use will not be high because the floor print will be 1,200 sq ft after all the setbacks, whereas the residential lots are currently 4,500 sq ft,” he says, adding that despite this, the property values should increase.

See says properties along Jalan Othman, part of Jalan 1/12, Jalan 1/19, Jalan 1/21 and Jalan Penchala are most likely to benefit from the conversion of title from residential to full commercial as these are the main roads in the area.

CCO’s Chan agrees that property values may increase in the area due to the rezoning exercise. “Rezoning PJ Old Town to commercial use may emulate the successful redevelopment of Petaling Jaya’s Section 13,” he says.

However, this does not mean there will be an “instantaneous change”, he says. Properties with prominent frontage on main roads will have the highest potential for commercial purposes, and their rents and prices may greatly increase. “When the zoning is changed to commercial, the land in PJ Old Town will be an ideal target for developers wishing to develop commercial projects in the Old Town areas.”

“All four sections in PJ Old Town were not very active in 2020. There were fewer than 15 transactions, mainly due to the pandemic. The most active product was 1-storey bungalows in Sections 1 and 2, where prices depend on the lease period and condition of the house,” says Metro Homes’ See.

He notes that of the four sections, Section 1 is still the most active. As for shops, there were two transactions last year — one in Jalan 1/14 that was sold for RM1.7 million, and another in Jalan 1/19 for RM1.8 million.

Overall demand is not strong in the area because the town is old, the buildings are rundown, and you may have neighbours who are not pleasant, compared with a new township, says See. “Values will be stable and won’t fluctuate unless redevelopment occurs to modernise the area such as the wet market, Taman Selera and public infrastructure,” he says, adding that owners can increase the value of their property by extending the lease to 99 years.

Chan concurs, saying that if landowners extended the lease term, it could enhance the property’s value. “Maybe the owners can collectively apply to the state government to extend the lease at a discounted rate,” he suggests.

“Many existing buildings in PJ Old Town are old buildings, which may be physically and economically obsolete. The owners of these buildings can jointly redevelop the land to enhance the value of their properties.

“Generally, PJ Old Town is an active development area in the Klang Valley. Although it is an old area, it is considered a prime location due to its proximity to Kuala Lumpur and Old Klang Road.

“Due to its strategic location, PJ Old Town is ready for redevelopment, which should be carried out holistically, and priority should be given to old and obsolete buildings to optimise the potential of the location.”

On the outlook for PJ Old Town, he says property values have reached their maximum potential unless a new catalyst drives demand and growth.

“As the lease tenure diminishes substantially, the cost of the extension of the lease premium escalates, and purchasers will factor this into their purchase price. The rezoning exercise by MBPJ from limited commercial to full commercial space will have a positive impact on the area. However, there is speculation that the Kidex elevated highway will add to the traffic congestion in the area as well as impact the development aesthetics of the area,” says Toh.

PJ Old Town has a long history and carries a lot of memories for those who grew up there or are still living in the area. Hopefully, any plans to redevelop it will retain the town’s distinctive features, such as its community spirit and good offerings.