DesignWorks: At the forefront of forward design 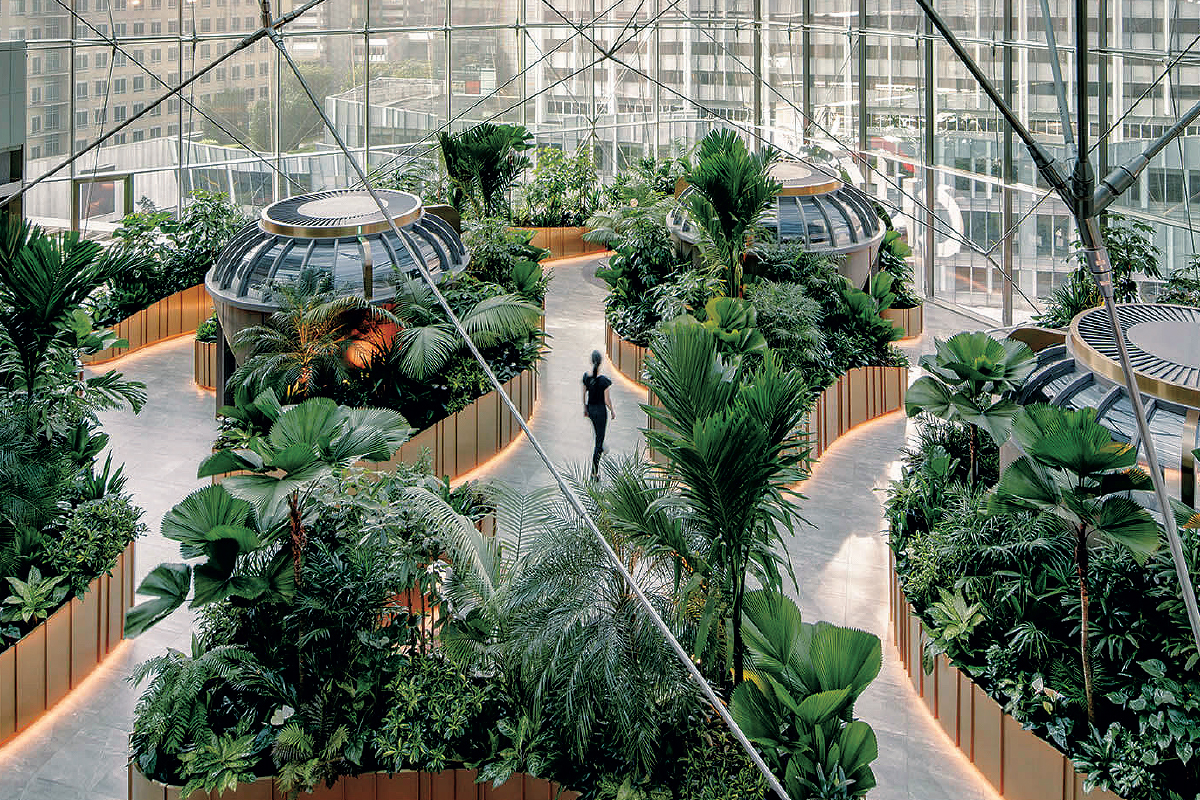 The newly completed Citi Wealth Hub in Singapore is one of MOD’s significant, distinctive projects (Photo by MOD)

“It’s a funny story how we got started. Initially, I didn’t have any intention of starting a practice. I was contented as a full-time academic at the National University of Singapore (NUS), and I was on my way to getting my PhD at the Massachusetts Institute of Technology,” says Seah during a Zoom call.

“A friend brought a boyfriend over to my tiny apartment in Little India one night, and he complimented the space I designed. I found out later that he was Loh Lik Peng, Unlisted Collection founding director and owner of all the cool hotels and restaurants in Singapore.

“A few months later, I got a call from him to design a big project that required full commitment, so I decided to leave NUS, and started MOD in 2004,” he recalls. “The project itself, the New Majestic Hotel … its design ethos was light years ahead of its time and the impact is just staggering. It also launched MOD.”

Director of projects David Tan joined the team in 2011.

“Prior to MOD, I was working overseas in the US and then joined Foster + Partners in London. Then I moved to Singapore and met Colin in Chinatown. The direction of the MOD office really resonated with me and I really wanted to be part of the firm,” adds Tan, who leads its Kuala Lumpur office. From left: Seah, Tan and Joy have raised the profile of the firm and led its impressive growth Photo by MOD)

“David has been a key addition — and a fortuitous one — to our team, especially in terms of the global outreach and executing complex projects with tight deadlines. The struggle is that Singapore is really small and the jobs were scarce especially during the economic crisis between 2008 and 2010. Being the boutique-sized firm that we are, we needed to expand further abroad,” says Seah.

Headquartered in Singapore, with offices in Beijing and Kuala Lumpur, MOD was named a “Rising Star of Architecture” in the Monocle Singapore Survey 2010 and “Designer of the Year” at the International Design Awards, US, in 2010.

MOD is known for amalgamating heritage and contemporary designs. “This has been the genesis of all of our works. We often find clients who would like to make bold, unprecedented [and often experimental] statements. We also prefer to work with them [directly] to achieve the design goals,” Seah elaborates. To tackle the challenges during the Covid-19 pandemic, the firm uses remote working and multiple digital platforms such as cloud computing to stay in touch with the team members and clients worldwide.

“Our philosophy has always been to question, disturb and redefine. We need to rethink our design approach due to the pandemic,” says Seah.

Tan adds: “We have been looking at and adapting digitalisation for our design processes and communications … Today, we use new methods via iPads, direct messaging platforms, chat rooms, digital whiteboarding and cloud computing, cloud scheduling and cloud software…

“Our new processes also cut down on travel time, physical meetings, and optimise project needs by [allowing] quicker ad hoc discussions to resolve immediate issues, even with clients and consultants. It is quite an evolution as we ride through this.”

Known for its hip and cool branding, MOD has experimented with other design materials as well. “We have a range of projects, from architecture and interiors to hospitality and retail, and we like to embrace different typologies. We also designed for a jewellery line, CODE Jewelry, in 2019 and collaborated with Bynd Artisan, creating leather discs that are triangular and customisable,” says Seah. MOD lists Citi Wealth Hub as one of its significant, distinctive projects. Located in Singapore’s downtown Orchard Road district, the newly completed 2,725 sq m commercial site was shortlisted for several awards and was The Shopping Space winner at the 2021 INDE Awards, Australia.

“This project is very now and luxe [especially in terms of forward, biophilic design]. Instead of your typical wealth centres, which can be dull, we created a new ‘banking conservatory’, which signifies a new symbol of wealth, where wealth is captured through the notion of sustainability,” describes Seah.

Inspired by the site’s soaring glass-lined atrium, MOD’s response was to create a focal point that would anchor the entire experience. “We created a lush thriving indoor conservatory and paired it with a series of lifestyle-inspired spaces nestled within or organised around it,” says Tan.

MOD was also commissioned by CEL Development to design the 12,600 sq m 100PP Office Building in Singapore in 2014. “Our role in it was to strategise, brand and design a creative epicentre for the emerging black-collar creative class. The design will provide an environment tailored to the preferences and needs of the contemporary creative workplace or studio.

“In recent years, commercial offices open to conducting their businesses in somewhat non-traditional settings have been migrating out of the urban centres and CBD areas towards more-affordable light industrial or warehouse districts, all with larger floor plates and higher ceilings. We chose to exploit the sea-fronting context of the site by introducing a series of stepped balconies across the different floor levels, so the building appears to be shifting away from the busy elevated highway fronting the building,” describes the firm.

According to MOD, the façade comprises windows, balconies and air-conditioning ledges, but MOD intentionally blurred the definition of each element by layering a series of horizontal stripes throughout the façade. The stripes generate horizontal visual movement across the building and emphasise the “shifting and stacked” nature of the different volumes, it says.

Another significant project is The Prestige Hotel in Penang. “Situated within Penang’s Unesco World Heritage neighbourhood of George Town, the project draws inspiration from its local colonial history as well as its lush island identity to create a ‘tropical Victorian eden’ experience for its guests,” it adds.

MOD has recently completed some projects and has several exciting ones in the pipeline. One of the hotel projects is The Standard Hotel in Singapore, which will be opening in a couple of years.

“Closer to home, we completed the EcoWorld Layer Gallery (Bukit Bintang City Centre) on a site that was formerly Pudu Prison. The project has a very unique façade, with foam material to create the curvature, and greatly contrasts with the area it is in,” Tan says.