From The Edge
Edge Weekly

#edGY: How RM500 kickstarted a million-ringgit business and more

MEET Norasurah Abdul Wahab, founder of EDZ.com.my, formerly known as Eight Designs. With just RM500, she turned what was once a blogshop into a full-fledged Muslimah fashion business with RM1.5 million in annual revenue.

EDZ not only sells online at www.edz.com.my but also has shops in Bandar Baru Bangi, Shah Alam and Wangsa Melawati, besides selling on Rakuten.com.my. It has garnered over 100,000 Facebook fans organically.

Last November was a good month for EDZ. It won the second runner-up prize in the Alliance Bank SME Innovation Challenge and received a RM100,000 cash prize.

Norasurah has ambitious plans for her business. She wants to use the cash to expand production.

She wants to grow the EDZ brand beyond Malaysia and is eyeing an office and warehouse in Paris. Annual sales of Muslim clothing in Europe have reportedly hit US$1.5 billion (RM5.43 billion).

Norasurah points out that Europe is not yet at the cutting edge of Muslimah fashion and that EDZ has received a notable quantity of orders from European customers.

“Modest fashion is taking off in Malaysia, and the world is now looking over here for stylish Muslimah wear,” she says.

Six years ago, Norasurah had no entrepreneurial or fashion design background. She was a multimedia designer from a poor family in Kelantan who aspired to live comfortably. She took a risk with EDZ — and says it has been life-changing.

In 2008, she put one toe into the Muslimah fashion business with a blog and a mini-shopping spree in Kenanga Wholesale City, when the trend for blogshop businesses was at its peak. Norasurah bought eight different clothing designs to sell on her blog.

Three weeks later, she made her first sale. Then orders grew faster than she expected.

The next year, Norasurah used her blogshop earnings to open her first boutique in Bandar Baru Bangi and started designing her own clothing line to develop a strong design identity to make EDZ distinctive from other Muslimah fashion lines.

It was a slow but undeniably steady path to success. With her husband, she started sourcing for fabric and production houses in Vietnam and Malaysia before deciding that the prices China offered were a no-brainer.

In 2010, Norasurah and her husband decided to open a boutique in Kota Baru. This burned a hole in their pockets, making a loss of close to RM150,000 in less than two years.

“The reason we opened in Kota Baru was emotionally driven. I wanted a business in my hometown and that was the big mistake. The location was very good, but there was not enough research on our part,” she says. Most of EDZ’s customers in Kota Baru were also existing online ones. The sporadic growth of malls in the outskirts of the state capital also diverted customer traffic from EDZ. She decided to close the boutique in Kelantan.

Despite the loss, Norasurah and her husband decided to double-down on their business investment and open two new outlets in Shah Alam and Wangsa Melawati at RM150,000 each. This time, they had their business plan figured out.

EDZ’s collections are minimalist in design. Solid, subdued colours for dresses and pleated skirts are Norasurah’s trademark, and have come to be positively associated with the brand.

“A customer wanted to buy a scarf. But when she wanted to pay at the cashier, she said, ‘Eh, mana label? Ambil lain yang ada label!’ (Where’s the label? Get me one with a label!),” Norasurah relates, laughing.

Given high demand, EDZ consistently produces four new designs each month, with a production run of 700 garments per design.

However, with high demand comes the constant challenge of finding efficient ways to increase production.

“We want to sell high-quality, modest wear at an affordable price. That’s our mission [and it underpins] how we run the business. We do not want to compromise on quality and it has to be affordable. So we try to reduce the cost of production,” says Norasurah.

“Others in our industry might focus on how to sell for cheap. That’s it. But that’s not our business. We want our customers to feel proud when they wear our dresses.” 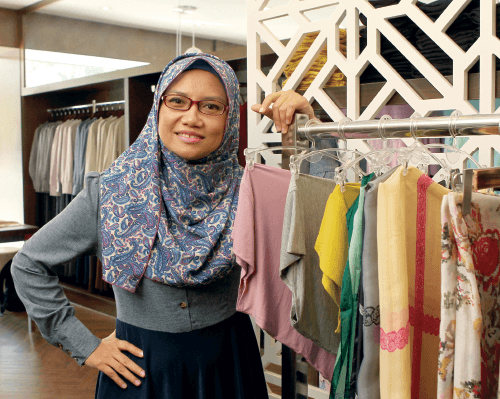