El Niño may be fast-tracking to arrive by summer: Braun 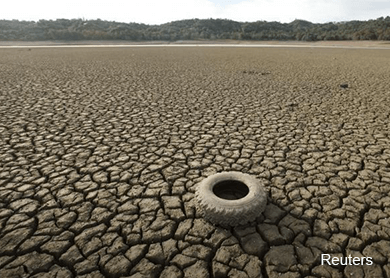 CHICAGO (Feb 28): The path to another round of El Niño in 2017 appears to be shortening, as tropical Pacific Ocean waters have been warming at a substantial rate.

Weather forecasters have been eyeing for a couple of months a possible return this year of El Niño, which normally comes around every two to seven years and last occurred in 2015/16.

The El Niño-Southern Oscillation is one of the most widely followed long-term indicators of climate, as both its warm and cool phases can trigger varying effects on weather patterns globally.

El Niño, which is associated with warmer-than-normal sea surface temperatures (SSTs) along the equatorial Pacific, is known to bring volatile weather to some parts of the world and is closely watched by agricultural and energy markets. Some notable impacts include droughts in Southeast Asia and heavy rains and erosion along the Pacific coasts of North and South America.

La Niña, the cool phase of ENSO, just concluded its six-month run last month. In the last several weeks, remnants of the colder waters have been all but eliminated.

In the week centered on Feb. 22, the SST anomaly was positive 2.3°C in the Niño 1+2 region, the easternmost of the four Niño regions, directly off the coast of Peru. Warming in this region sometimes precedes the onset of El Niño.

To put this into perspective, since weekly record-keeping began in 1990, the only other instances that featured warmer SST anomalies in this region occurred during the mega-El Niños of 2015/16 and 1997/98, as well as the moderate-to-strong El Niño in early 1992.

The week centered on Jan. 25, 2017, also recorded a 2-degree anomaly, so the latest value is not necessarily an outlier. But if this trend eventually translates into a full-on El Niño later in the year, the outcome would be unprecedented.

A record-breaking El Niño surfaced in mid-2015 and lasted through early 2016, after which SSTs dropped off and gave way to the relatively weaker La Niña event to cap off the year.

But following the previous occurrences of strong El Niño — 1997/98, 1982/83, 1972/73 — the warm cycle did not appear again until three or four years later. So the possible return of El Niño this year would present a unique situation against which there is not much comparable data.

This month for the first time, El Niño is the most favored scenario over neutral or La Niña conditions starting in July or August, according to the International Research Institute and the US Climate Prediction Center. The probability for El Niño between August and October stands at 51%, while the chance of neutral is at 38%.

But some models are calling for El Niño’s arrival a bit earlier based on the progression of the SSTs in recent weeks.

Monday’s run of the CFS version 2 model, maintained by the US National Centers for Environmental Prediction, shows steady El Niño conditions – SST anomalies of at least 0.5°C – for most of the Northern Hemispheric spring and then a moderate to strong event in place by the summer.

The projections of the CFSv2 should be considered with caution, however, as the models are run each day with a shifting 10-day period of initial model conditions, meaning the output can be highly dependent on a small segment of time. However, other models have been increasingly leaning toward both El Niño and its earlier onset.

The latest chart of international ENSO forecast models compiled by IRI and CPC has shifted in a warmer direction compared with the previous update, and several models suggest that El Niño could be comfortably in place as early as May.

The forecast trends are starting to show a divergence between the statistical and dynamical models, the latter of which is based on the actual atmospheric and oceanic state rather than historical tendencies.

Since the dynamical models are now mostly calling for El Niño by the start of Northern Hemispheric summer, this gives confidence that environmental conditions are indeed turning favorable for the quicker return of the warm cycle.

The opinions expressed here are those of Karen Braun, a market analyst for Reuters.