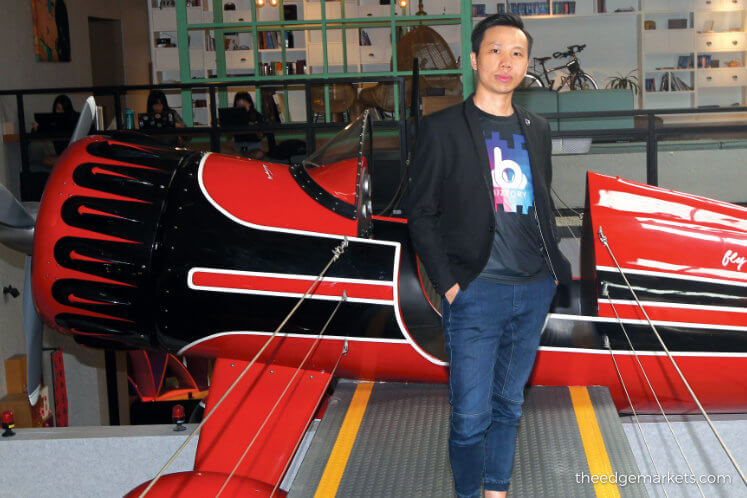 Most accounting software programmes are tools designed to make accountants’ lives easier, whereas we aim to make the business owners’ lives easier. > Soong

With the WeWork initial public offering being shelved late last year, many investors and venture capitalists have started to question whether the “growth at all costs” model is viable and sustainable. The bandwagon, as it turns out, has lost most of its steam.

Yet Biztory, a local Malaysian start-up, is able to do what WeWork could not — be profitable after five years in service, with only a fraction of the market share compared with its leading competitor. More strikingly, it says it has been able to generate a return on investment (ROI) of 1,300% for its investors over three years, essentially a compound annual growth rate of 135.13%.

Biztory is a provider of cloud accounting software (CAS), designed specifically for small and medium enterprises, micro-entrepreneurs and freelancers. It currently has about 5,000 customers and eight employees. In January, it raised RM1 million through equity crowdfunding (ECF) in return for a 15% stake in the company, after making a bold claim of being able to offer investors a return of 13 times their original investment.

Biztory founder and CEO Bryan Soong says he has merely taken a traditionally standalone business-to-business product, put a software-as-a-service spin on it and mass-marketed it as a business-to-consumer product. “The root of our profitability is in acquiring customers efficiently while keeping costs low. We want to keep our acquisition costs as low as possible by leveraging digital marketing, a strategy that we have set out from the beginning,” he says.

Soong explains that most accounting solutions are traditionally sold to businesses through sales agents. Software providers generally employ a large sales team to schedule meetings with prospective customers and conduct product demonstrations to convince them to purchase the product. The sales cycle is typically long, unpredictable and expensive.

“For the past 18 months, we have maintained that for every RM1 spent on advertising, we will generate RM3 in revenue. Running a business is as simple as that. You have to make sure you have enough income to cover the costs,” says Soong.

“We only have a team of eight. Others may have a larger team, but we keep it very lean.”

He made it clear that profitability has always been a priority from the get-go and does not subscribe to the “growth at all costs” mindset. It is also the reason Biztory does not have a free subscription model and only offers clients a 30-day free trial.

“Some of our competitors offer free plans with limited features. But you will have a lot of free users coming in and consuming your resources and server bandwidth, with you having to pay on their behalf,” says Soong.

“I don’t think I am comfortable burning (cash) that way. We are running a subscription model. It is all about getting enough subscribers to support our expansion and cash burn rate. If the company is not profitable, you may look at your balance sheet every single day and lose sleep over it. I don’t think that is healthy.”

The CAS industry is a severely under-tapped market in the country. According to the Malaysian Institute of Accountants, the adoption of higher-level technologies among accountants is less than 25%.

Soong has personally observed that the CAS penetration rate in Malaysia is less than 5%. This compares with Western countries, where 60% of small business owners have moved most of their business processes to the cloud, including the accounting process.

“Typically in Malaysia, or even regionally, small businesses still use Excel sheets [for accounting purposes] or print out paper invoices. They compile these and outsource the work to freelancers,” he says.

“Small business owners rarely manage their finances in-house. They have no idea what is going on in the back end and they very much rely on third parties and freelancers to help them manage all of that.”

“He has to consider whether the product sold is taxable. And if so, which tax code does it belong to? Does he have enough stock in his inventory? What payment terms is the customer considering? All of these will be derived into a few lines of double entries, in accounting terminology, which complicates the entire invoicing process.”

Soong explains that most accounting processes revolve around bookkeeping, a menial process that most business owners are not familiar with. Using Biztory, users only need to fill in the details of the transaction, similar to filling up a questionnaire, and the software automates the entire process and updates all the relevant accounts.

“This basically saves time and headache for business owners. It is so easy to use that it can be completed by a salesperson who may not know anything about accounting. In the old days, we needed to hire someone with professional know-how to do this,” says Soong.

While CAS is an attractive proposition for many small businesses, Biztory is not the only player in this space. It faces intense competition against reputable brands such as QuickBooks and Xero.

However, unlike other cloud solutions such as Google Docs and Google Sheets, which can scale globally quickly, CAS requires a great degree of localisation, requiring the software to be kept up to date with each country’s unique and ever-changing tax code and laws. Biztory sees this as an opportunity to grab some market share.

“One of our competitors has been listed for more than two decades and is a huge player in the West. It used to have a service centre in Singapore but withdrew at the end of 2018. Now, its nearest service centre is in India, which has a different time zone and culture. In terms of localisation, it is not so much up to standard here in Malaysia,” says Soong.

“For example, in Malaysia, we are running with the Sales and Services Tax (SST). Every two months, companies have to submit a written form, the SST-02. That is something some of our competitors cannot generate automatically, but we can.”

Apart from some minor variances in terms of product features and usability, what truly differentiates each provider is its go-to-market strategy, says Soong. While Biztory uses digital marketing as its primary customer acquisition channel, other players have leveraged accounting and consulting firms and their networks to help sell their products.

“One of the reasons we decided to raise funds through ECF was to explore the idea of reseller distributorship. We set up a campaign where you could become a reseller by investing a minimum of RM20,000 in our company,” he says.

“If a reseller brings on board a customer, he gets a 50% share of the profit, which will recur as long as the customer remains subscribed. We want to spread the risk so we do not rely solely on one acquisition channel. Not only does this incentivise our investors, it helps us acquire customers with less effort so we can focus on improving the product and other aspects of the business.”

To substantiate his claims of being able to provide investors a return of 13 times their investment, Soong points out that through the automated process of acquiring customers digitally, Biztory has witnessed a consistent conversion rate of 15% after the 30-day trial period.

“The customer acquisition cost is about RM250 per customer on average. If the customer remains subscribed to the standard package for three years, it will generate about RM2,600 in revenue, which translates into a gross profit margin of 90%,” he says.

“The customer’s business may grow substantially in those three years and require more accounting features. We can then upsell the service package, which is another revenue stream.”

Due to the nature of its subscription model and the compounding effect, the company only has to expand its present customer base by five to six times. “By the third year, we should be able to enjoy a revenue growth of 13 times. That is how we came out with the ROI figure,” says Soong.

He does not believe that growing its subscriber base from about 5,000 to 30,000 is unrealistic. After three years, his conservative estimate indicates RM6.5 million in revenue, which translates into a net profit of RM2 million.

In terms of risk, Biztory is looking at a subscriber cancellation rate of 8% annually. Soong believes this is a healthy figure, considering that the majority of its user base are micro-enterprises and small businesses, which may not be as sustainable as large corporate firms.

“In the beginning, we were losing cash just to sustain the company because we did not have enough subscribers. But as soon as we hit a critical mass and gained enough subscribers, our cash flow increased steadily,” he says.

“If we are talking about risk, the growth rate may not be as optimistic as we claim, but there will be growth. It is only a matter of 3, 5 or 13 times the returns.”

Soong is extremely positive on the outlook for Biztory, and the CAS market in general, because of the increased awareness of digital adoption, brought about in part by the great government push. His confidence also springs from the guidance he has received in growing his business.

“How Teck Sang, founder of UBS Corp Bhd, is my mentor. The company went public on the Main Board in 2003 and was acquired three years later by a UK-based accounting software company called Sage for RM100 million,” he says.

“That is why we are confident about this business model. We are pretty much following in his [How’s] footsteps. The biggest difference would be that UBS used to be an offline standalone software provider while we are doing this online.”

Soong reiterates that a profitable business model is not built solely on top of a revolutionary business idea but on business acumen as well — one that focuses on the core business model, cash flow management, strategy and execution. “There are no extraordinary secrets. Success is about hard work, perseverance and believing in what we are doing, and believing that the market needs this kind of solution. Many people can easily replicate our product, but that will not automatically make their business successful,” he says.