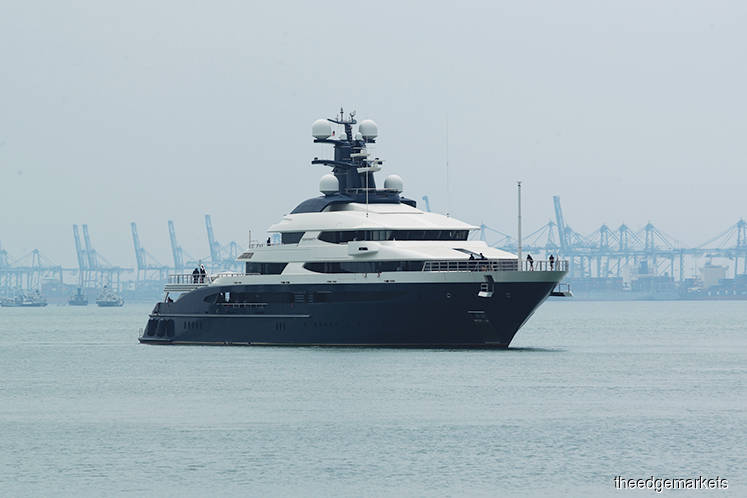 KUALA LUMPUR (July 11): The proceeds from the sale of 1Malaysia Development Bhd (1MDB)-linked super yacht, Equanimity, are currently stored in a bank account managed by a local law firm for three months.

In response to a question from Datuk Ahmad Jazlan Yakuub on the amount the government had gained from the sale of the yacht, Finance Minister Lim Guan Eng said the US$126 million or RM527.4 million gained from selling Equanimity to Genting Malaysia Bhd is being temporarily stored in a sheriff stakeholders account.

"The proceeds from the sale [of Equanimity] were received in full on April 23, 2019 and is now being kept in a sheriff stakeholders account managed by a well-known local law firm for three months, for the purposes of settling the maintenance costs of the ship that will be decided by court ruling," said Lim.

After settling the maintenance costs, the remaining proceeds are expected to be placed in 1MDB's recovery account by August 2019, and will be used to repay 1MDB's debts, he added.

In a supplementary question, Ahmad asked Lim for the total amount of debt 1MDB currently has, the value of the assets associated with the fund and the true level debt.

In response, Lim said the principal of 1MDB's debt is as much as RM26.65 billion.

To date, the current government has repaid RM8.9 billion of the debt, he said, adding that the total amount owed by the wealth fund is RM40.57 billion, with interest amounting to RM10.44 billion, bringing the total amount of debt owed to RM51.01 billion.

"We hope to get back the losses and compensation from various parties including Goldman Sachs and if we look at assets, the value including real estate assets cannot be estimated as the legal matters have not been completed," said Lim.

He added that Tun Razak Exchange (TRX) has been detoxified and that earnings will be known when the project matures in seven years.

Ahmad then complained to Speaker Datuk Mohamad Ariff Md Yusof that Lim had not accurately answered his question.

In turn, Lim shot back by saying he had answered Ahmad's questions and that if desired, Ahmad could refer to the Hansard recording of the question.

Datuk Seri Ahmad Maslan [BN-Pontian] then asked if the government is looking to recoup monies given to 5,800 pilgrims by Yayasan 1MDB.

Lim said the focus of the recovery efforts was organisations, while accusing Ahmad Maslan of playing with racial sentiments.

In response to Ahmad Maslan quoting former 1MDB president and chief executive officer (CEO) Arul Kanda's claim that the wealth fund's assets amounted to RM43 billion, Lim emphasised that 1MDB's assets were hard to audit and it was difficult to ascertain their true value.

He added that the government had to pay back the principal amount and interest.

Datuk Wee Ka Siong [BN-Ayer Hitam] complained to Mohamad Ariff that Lim had violated house rules by mentioning ongoing court cases related to 1MDB in the chamber. The Speaker then said Lim had not violated any rules as his response did not discuss the merits of the cases, and he was answering what was asked of him.