WHILE a number of global oil and gas companies are exiting Malaysia to pursue shale gas exploration and production back in the US, Exxon Mobil Corp, the world’s largest publicly traded oil and gas company, is keen to maximise its assets and explore new investment opportunities in Malaysia.

He stresses that the company sees Malaysia as a long-term business investment as it offers various value-added opportunities. “We are always looking for new investments in the country but we are also very mindful that they meet our economic criteria.”

Although ExxonMobil is also considering investments elsewhere, several factors encourage it to pump money into Malaysia, says See. “We appreciate the stability of the [Malaysian] business environment, the value of the contract sanctity that we have with Petronas (Petroliam Nasional Bhd) as well as the resources and talent available in the country.”

See, who is replacing J Hunter Farris, began his career in ExxonMobil as an engineer back in the 1990s, after graduating from Universiti Malaya with a civil and structural engineering degree. His last position before assuming the role of president of the Malaysian operations — the first local to do so — was US production manager responsible for the oil major’s assets in the Gulf of Mexico, Alabama, California, Texas, Kansas, Oklahoma and Colorado.

Having been away for close to a decade, See says it is an exciting time to return to Malaysia.

He highlights that the current low oil price environment would not lead to ExxonMobil cutting its production in Malaysia. “We are not going into a mode where we are reducing production because oil prices are low. This is a long-term business and O&G is a commodity. Commodity prices will rise and fall.”

Apart from looking for new opportunities, he says, the company’s focus is to maximise its existing assets, including actively investing in the Tapis enhanced oil recovery (EOR) offshore project.

ExxonMobil recently invested RM10 billion with its partner Petronas Carigali Sdn Bhd in the project, which is currently the largest of its kind in Malaysia.

The Tapis field is part of a 2008 production sharing contract (PSC) in which ExxonMobil holds a 50% share. Tapis was discovered in 1969 and saw production in 1978, marking ExxonMobil’s first upstream venture in Peninsular Malaysia.

According to industry analysts, the ageing oilfield is producing about 5,000 barrels per day (bpd) compared with a maximum of 90,000 bpd in its early days. The field is estimated to have yielded over 400 million barrels of crude oil.

The EOR initiative is typically exercised to maximise the lifespan of oilfields by increasing the amount of crude oil that can be extracted from them. The Tapis EOR project is expected to increase the oilfield’s production to a maximum of 25,000 to 35,000 bpd by 2017, according to industry analysts.

However, EOR projects entail huge investments, which raises questions about their feasibility. “It is not a question of cost but whether it makes economical sense and if it meets the economic criteria and recovery of oil and gas,” says See.

He points out that the Tapis EOR project is expected to see a 5% to 10% incremental recovery from the oilfield. “It may seem like a small percentage but when there is a lot of oil in place, 5% to 10% can convert into a significant amount.”

On the topside mishap at Tapis R, one of the largest offshore platforms in Southeast Asia and a key component of the Tapis EOR project, earlier this year, See says the company has contractual arrangements with its contractors and had worked closely with Malaysia Marine and Heavy Engineering Bhd to recover from the incident.

“We were able to load out the platform a couple of weeks after the incident. As far as commitment with Petronas was concerned, we were on schedule,” he says.

Other than the Tapis EOR project, ExxonMobil recently brought the Telok and Damar gas development projects on line and is considering its Guntong field as its next project under the EOR initiative.

The Guntong field, which is also under the 2008 PSC, was discovered in 1978 and is located off the east coast of Peninsular Malaysia. “We are at a very early stage and it is still under evaluation to decide what type of concept it will take and if it will be economical for a larger project,” See says, adding that the new investment will most likely be developed in phases.

ExxonMobil supplies 50% of the gas demand in Peninsular Malaysia and operates 34 offshore platforms and another 10 jointly with Petronas Carigali. It has 50% interest in three PSCs — Gas PSC, 2008 PSC and PM5.

PM5 comprises the Larut field while Gas PSC includes Angsi, Lawit, Bintang, Damar, Telok and Jerneh. The 2008 PSC comprises Guntong, Tapis, Semangkok, Irong Barat, Palas, Tabu and the recently divested Seligi. All of these fields are off the peninsula. 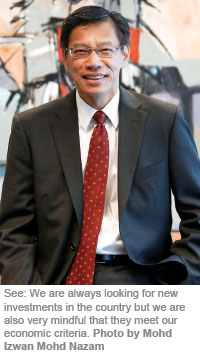 In June, ExxonMobil sold its stake in Seligi and its 50% interest in PM8 PSC to UK-based EQ Petroleum Production Malaysia Ltd. See reassures that the divestment was not part of a move by ExxonMobil to exit Malaysia, like its US-based peers recently.

Although ExxonMobil had discovered and operated Seligi and seen lucrative production from it, See says the divestment was part of the company’s normal business strategy.

“We continuously look at the contribution of our assets to our operating and financial objectives. For a variety of reasons, some of these assets may be of more value to others than to us.”

ExxonMobil has a long history in Malaysia. The US-based company’s first production here was 40 years ago while its upstream business will celebrate its 50th anniversary next year.

“This is a testament to our longevity and view of the business,” See says, reassuring that the company is in Malaysia for the long term.