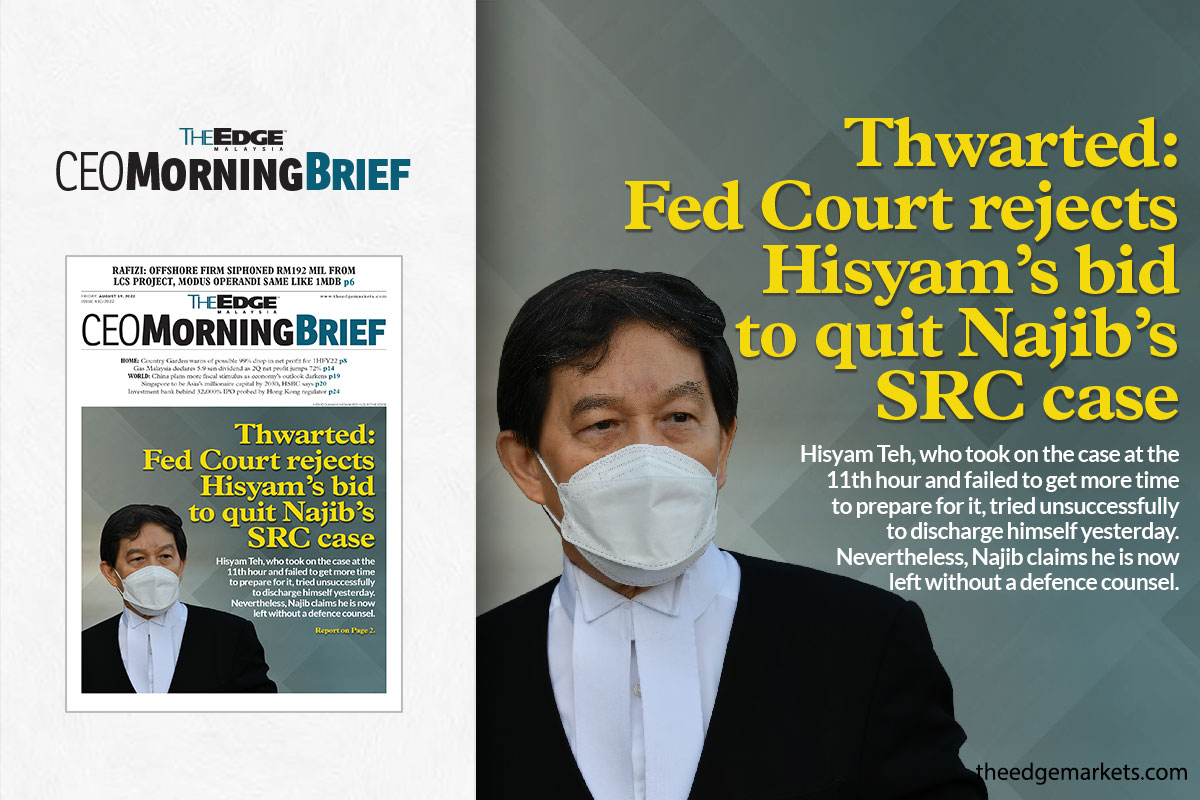 After an hour-long recess in Thursday’s (Aug 18) session, the five-member bench returned to the courtroom, and denied Hisyam’s request to discharge himself.

Subsequently, Tengku Maimun ordered for Najib’s SRC appeal to begin, with the prosecution to start their submissions. She noted that this would also provide Hisyam some time to prepare his submissions.

Earlier in Thursday’s hearing, Hisyam informed the Federal Court of his intent to discharge himself, reasoning that he was unable to continue serving as Najib’s defence counsel due to the scope and depth of the appeal. This came after Najib’s bids to adduce fresh evidence as well as for a three- to four-month postponement were dismissed by the five-member Federal Court quorum on Tuesday.

On Thursday, Hisyam also sought leave from the Federal Court for the defence’s application for a postponement to be reviewed, adding that if this was not granted, he would proceed with discharging himself. This request was also dismissed by the five-member bench.

Just two days prior, the renowned criminal lawyer told the press that the defence would give serious thought and consideration as to their next course of action.

Hisyam and Messrs Zaid Ibrahim Suflan TH Liew & Partners were hired at the 11th hour before the final appeal before the apex court, after Najib dismissed his initial counsels Tan Sri Muhammad Shafee Abdullah and Harvinderjit Singh in late July.

The Federal Court is the final avenue for Najib to appeal against his conviction in the SRC case.

The former premier was found guilty on July 28, 2020 by the High Court of all seven charges in relation to SRC, a verdict which was upheld by the Court of Appeal on Dec 8 last year.

The charges involved one count of abuse of power in approving RM4 billion in loans from Retirement Fund Inc (KWAP) to SRC, and three counts each of criminal breach of trust and money laundering of RM42 million in SRC funds.

The High Court sentenced Najib to 12 years in jail and a fine of RM210 million.