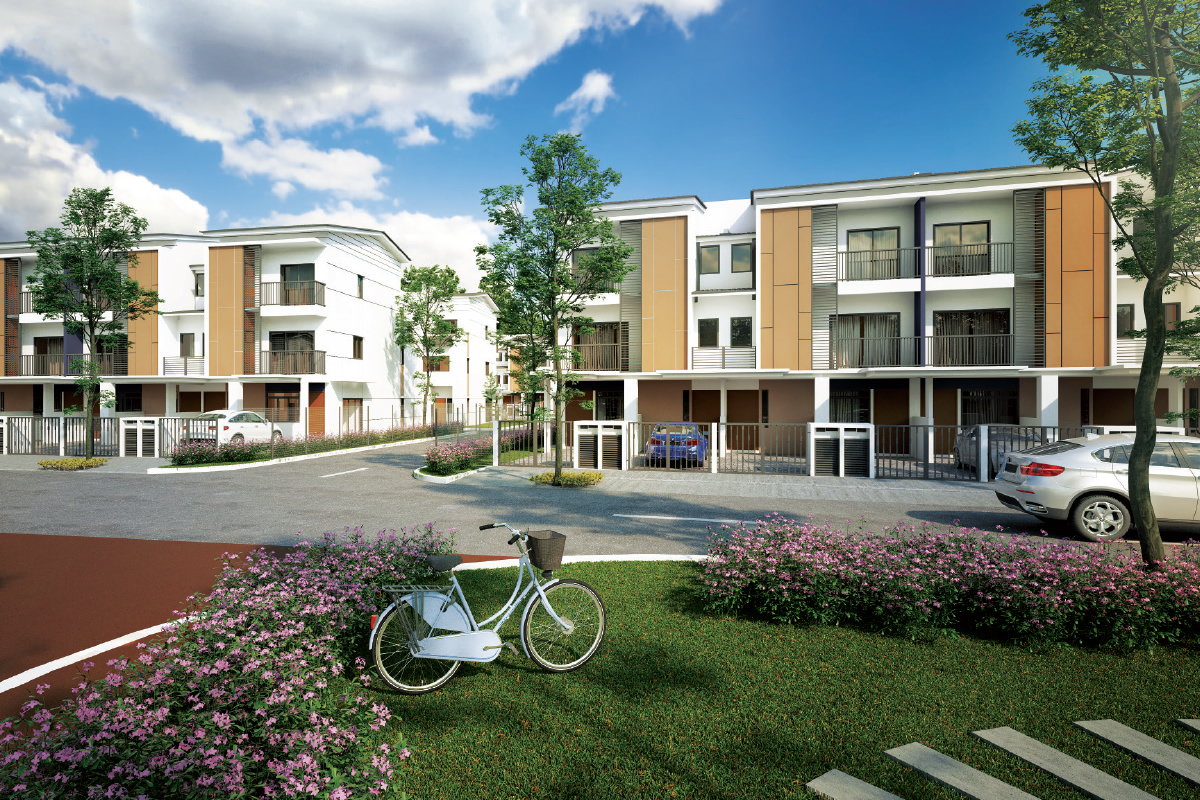 Elegan Residensi comprises a total of 404 1½-storey townhouses and is being developed in two phases: Phase 1, which has 270 units, was launched in August 2019, and Gadang Land obtained the advertising permit and developer’s licence for the 134-unit Phase 2 in November 2020.

The 17.5-acre leasehold gated-and-guarded development offers townhouse units with two layouts of 22ft by 75ft and 26ft by 75ft, and built-ups ranging from 1,282 to 1,511 sq ft, except for the upper-floor corner units, which measure 1,897 sq ft. Units typically have three bedrooms and two bathrooms, and some come with an additional powder room.

The individual strata-titled townhouse units are priced from RM531,000 to RM900,000 and monthly maintenance is estimated at RM100 to RM150.

According to Gadang Land head of finance and sales Kok Pei Shing, Elegan Residensi buyers are mainly owner-occupiers. “They are mostly couples who have a growing family, families with two generations living together as well as young couples looking to stay closer to Puchong.

“Location is a main attraction [of Elegan Residensi], as it is a 10 to 15 minutes’ drive to Bandar Puchong Jaya and less than 10km to Cyberjaya, with easy access to four main highways [including ELITE and MEX], the surrounding mature residential neighbourhoods [including Bandar Saujana Putra and Bandar Nusaputra] as well as various amenities nearby,” she says.

The development will have a playground, multipurpose court, jogging path and outdoor fitness equipment at a central park, says Kok. Kok: Location is a main attraction [of Elegan Residensi], as it is a 10 to 15 minutes’ drive to Bandar Puchong Jaya and less than 10km to Cyberjaya (Photo by Patrick Goh/The Edge)

Phase 1 is scheduled for vacant possession or handover by year-end whereas Phase 2 is scheduled to be completed 36 months from the signing of the sale and purchase agreement.

Kok notes that the pandemic and lockdowns since March last year have affected the property developer to a certain extent. “During the Movement Control Order (MCO), sales activities were limited, and this has caused some delay to our initial planned launch. So, our sales focus and initial registrations were shifted to online marketing platforms.

“Sales picked up in 2H2020, especially for the landed homes and affordable homes. Coupled with the Home Ownership Campaign (HOC) implemented by the government, it has been beneficial to people who have been wanting to own a home,” she says.