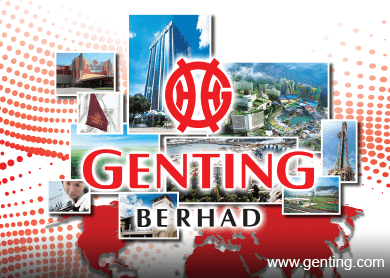 “The group’s core business at Resorts World Genting (RWG) continues to show resiliency in spite of the ongoing redevelopment works under the Genting Integrated Tourism Plan (GITP) and the uncertainties affecting the Asian premium players market,” it said.

Revenue from the group’s US operations, including Resorts World Bimini (Bimini) in the Bahamas, improved by 22% to RM313.8 million largely contributed by higher volumes of business from the Resorts World Casino New York City (RWNYC) and Bimini operations.

Its UK business revenue, however, fell 7% to RM355.7 million mainly due to lower hold percentage and volume of business in its international markets division, which cater to the premium players business.

The group expects global economic growth to remain moderate, with uneven prospects across the major economies. In Malaysia, economic activities are likely to moderate in view of the fiscal measures undertaken this year.

“The group continues to be cautious on the near term outlook of the leisure and hospitality industry, but remains positive in the longer term,” it said, adding that the newly introduced goods and services tax is expected to impact its revenue and earnings for the remainder of FY15.

Meanwhile, it said the construction and development works for GITP are progressing well, with one-third of the rooms at the new 1,300-room First World Hotel Tower 2A having been opened since December last year; the remaining rooms will be available for sale by mid-2015.

“The other attractions and facilities under the GITP are expected to be completed in phases from the second half of 2016,” it said.

In the UK, the group is cautious on the volatility implicit in the international markets division given the continuing challenges in Asia affecting the premium players segment.

“This year will see the introduction of new enabling technologies to further improve the operational efficiency of the business as well as the opening of RWG, which is situated next door to the second largest concert arena in the UK, namely Genting Arena, in the second half of 2015,” it added.

In the US, the group will strive towards improving visitation to the RWNYC and growing the business to retain its position as the leading operator in Northeast US. At Bimini, it expects the overall business volume to improve following the full opening of its new Hilton hotel in the second half of 2015.