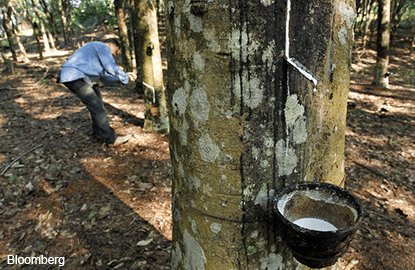 SINGAPORE (March 22): Global rubber output is expected to climb to 12.9 million tonnes in 2017 from last year's 12.4 million tonnes, an official from the International Rubber Study Group (IRSG) said on Wednesday.

Rubber was one of the best performing markets in 2016 and shot up again in January as flooding in top producer Thailand stoked supply worries.

But prices slid almost 20% in February on expectations of a recovery in Thai production.

"Thailand lost 25% of its output in January floods," Lekshmi Nair, IRSG's head of economics and statistics, said in an interview on the sidelines of an industry conference in Singapore.

"But we are forecasting higher output this year as (Thai) production is (expected to recover) this year."

IRSG is funded by the governments of rubber producing and consuming nations.

Benchmark TOCOM futures fell more than 5% on Wednesday to their lowest since December following an overnight slide in Shanghai futures, dragged down by weaker oil prices and a stronger yen.

Nair told Reuters that Thai trees planted between 2005 and 2008 were reaching peak output, while those planted in 2011-13 were starting to produce.

"Production from these trees will offset losses that we saw in Thailand in January," she added.

Thailand accounts for nearly 40% of the world's natural rubber, most of which is used in car tyres.

Traders and processors on Wednesday said rubber prices would drop this year as Thai output recovered along with production in Vietnam, where yields were also hit by flooding.