Green Business: The difficulties with composting 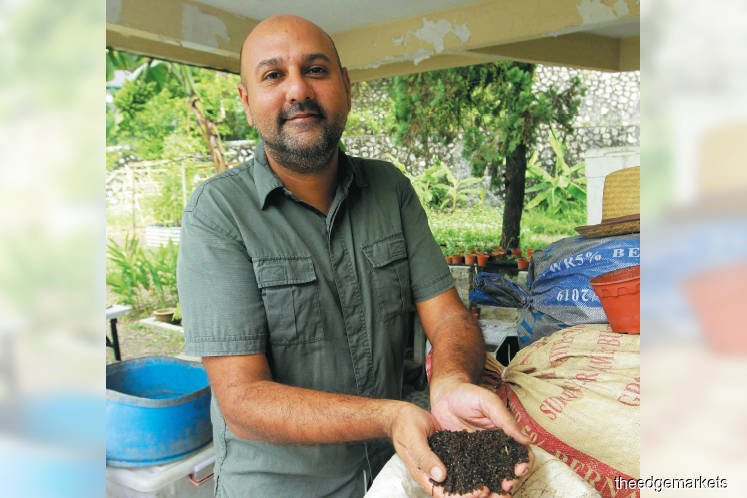 Composting is the act of processing various organic materials — otherwise regarded as waste products — into soil conditioners. Also known as “black gold” to gardeners, landscapers and farmers, the nutrient-rich matter returns valuable nutrients to the soil to help maintain soil quality and fertility, apart from keeping valuable resources out of the landfill.

While this has resulted in higher demand, the supply has yet to match it, making compost prices steeper than it should be, says Harbir Gill, founder and chief composter at Ground Control. “Unfortunately, compost in Malaysia is not as cheap as it is in other countries due to the high production cost. As a result, compost is less accessible to the general public.”

If compost is so expensive, how are soils enriched in Malaysia? Chemical fertilisers, he says. “Fertigation is increasingly being used among farmers and gardeners. We are too dependent on chemical fertilisers. It should not be the only way to increase the quality of produce. Overuse of chemical fertilisers could decrease soil fertility, strengthen pesticide-resistance, cause air pollution and even release greenhouse gases.”

Adding to the problem, affordable soil is nutrition-deficient. One is hard soil — true to its name, this soil is hard, consisting of mineral particles that are pressed closely together, leaving little room for the air and water that plants need. Another is mixed soil which, in most cases, is actually filled with burnt rice husks freely obtained from padi fields and do little to add nutrients to the plants, says Harbir.

The only way to bring down the price of compost is if it becomes part of the waste management system, he adds.

Harbir, who runs a production company, said that gardening used to be a way to kick back and relax. In 2010, he started giving classes on composting.

He taught at various places, including A Little Farm on the Hill and Eat, Shoots & Roots. At these classes, students would always ask him where they could buy compost, prompting him to start selling the compost he made.

Harbir’s business grew slowly. But as he increased production, he realised the difficulty in securing adequate raw materials.

“To compost, one needs carbon, nitrogen, water and air. While water and air are relatively easy to get, the raw materials of carbon and nitrogen are not. I have land in Port Dickson. Yet, I still find it difficult to source enough raw material for our production. That is because our country sends a whopping amount of our waste to the landfill,” he says.

According to the Solid Waste Management and Public Cleansing Corporation, Malaysians generated 38,142 tonnes of waste per day in 2018 — an increase from 19,000 tonnes in 2005. Almost half (44.5%) is food waste, which includes organic materials that can be composted.

Many countries have integrated composting into their waste management systems. Citizens of Oslo, Norway, for example, segregate their organic waste for collection. The waste is then composted and returned to them so they can use it in their gardens.

Since Oslo started separating household food waste and plastic in 2012, the rate of material recovery of the household waste has increased significantly. In 2016, 40% of household waste was either reused or recycled and only 3% ended up in landfills, according to a Eurocities report.

Meanwhile, the city of New York reached the milestone of collecting 10 million pounds (4.5 million kilogrammes) of food scraps and yard waste for composting in 2017. Dropped off by New Yorkers at dedicated locations, the scraps were transported for composting into a fertile soil amendment for urban farms and gardens or processed into renewable energy. The city had expanded its composting programme in 2011.

“If composting is part of the waste management system, the raw materials will always be available. Hence, production will become cheaper. Here in Malaysia, compost is retailed at about RM1 per litre, which means a 25-litre bag of compost is RM25. In Australia, compost is only A$5 to AS$7 per bag — cheaper than in Malaysia even after the currency conversion,” says Harbir.

“I hope Malaysia’s production cost can be cheaper. It would make so much difference to the quality of our gardens because then more people can use it. I do not think there is any type of farming now in Australia where farmers do not use compost, be it almond orchards, wineries or even home gardens. All of them use compost because it is cheap and easily available.”

The root of the problem is long-term contracts signed between municipal councils and companies that collect and dump the country’s waste in landfills, he points out. Some contracts can last decades. Alam Flora, for example, was granted a concession to carry out public cleansing management services for 22 years in Kuala Lumpur, Putrajaya and Pahang in September 2011.

“I have spoken to a couple of people involved in waste management. I asked them why they did not add value by composting. They said they did not need to. Their operating cost and profit were already sealed in the contract and it said they needed to send the waste to the landfill. They were already making money. So, why would they need to go the extra mile and do composting?” says Harbir.

The only way Malaysia can see significant improvement in the ecosystem is by changing the waste management policy, he adds. “By 2030, the country needs to stop creating more landfills. To make this happen, we should be working towards reducing the amount of waste that ends up in landfills.

“Organic materials should be composted. Over time, compost will become a viable, cheap household item. If this happens, everyone can enjoy better quality soil.”

According to Harbir, he has spoken to almost every municipal council he could get a hold of to inform them about the problems and ways to solve them. Nothing has happened. His team has had to resort to collecting the raw materials themselves. In many cases, Harbir has had to buy waste from drivers who were on their way to the landfills just to meet the demand for his compost.

Going forward, he will continue to speak on the importance of compost and its benefits compared with chemical fertilisers. He is very happy to know that compost is growing in popularity in Malaysia. In fact, the company sold thousands of bags of compost for Christmas alone.

“There are a lot of good intentions, especially among corporates and those who want to do more in terms of sustainability. Gardening is an amazing avenue for someone to learn about the overall concept of sustainability and climate change. This can be understood very easily through gardening and composting,” says Harbir.