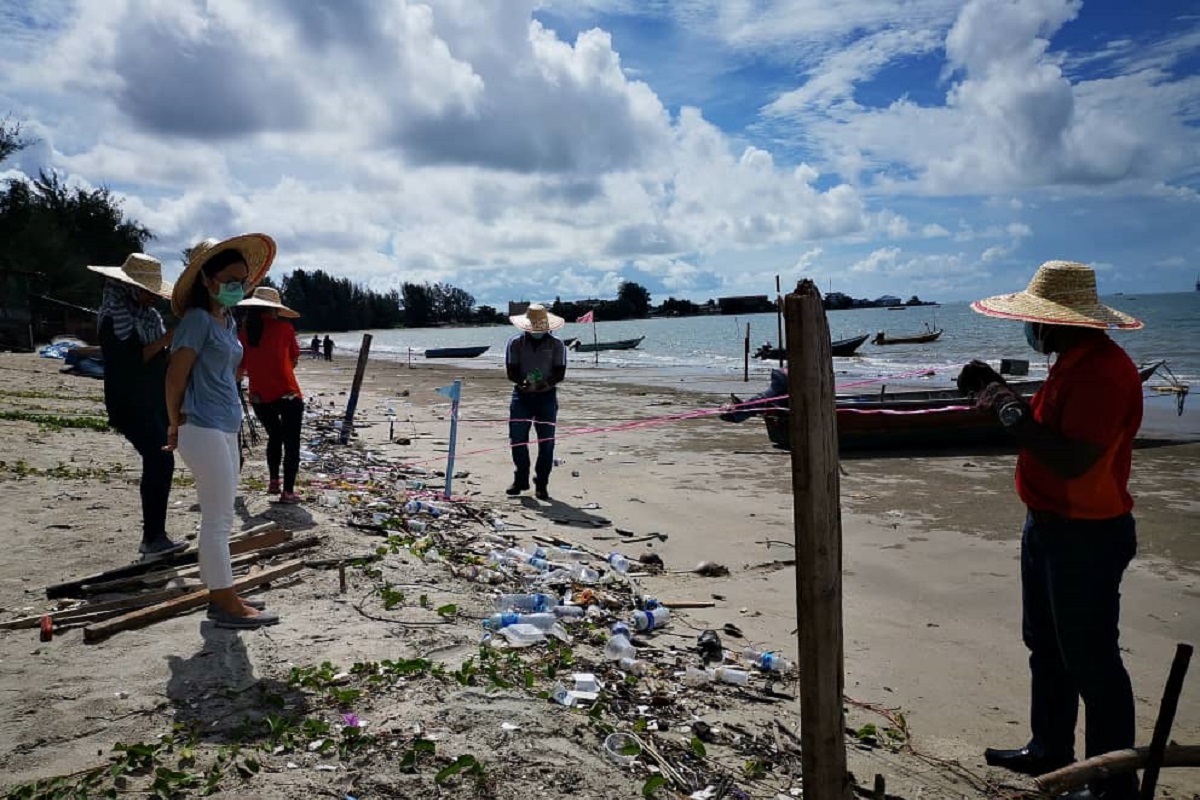 Malaysian plastic collector and recycler Heng Hiap Industries Sdn Bhd is the first company in the world to be successfully audited for the Ocean Bound Plastic (OBP) standards, basically opening it up to brands around the world which are looking to incorporate OBP in their products as part of their commitment to keeping waste out of oceans.

Control Union developed the standards along with Zero Plastic Oceans (ZPO), a non-governmental organisation (NGO) which focuses on creating mechanisms and incentives to clean out ocean-bound plastics. The two created the world’s first third party-verified label, Ocean Bound Plastic Certification, to certify goods made out of plastics destined to be otherwise dumped into the ocean. Supun, the team and Heng Hiap employees along the shoreline. The audit was conducted by Control Union on July 23 and 24 at Heng Hiap’s facilities in Johor and OBP collection points.

It was led by Control Union (Malaysia) Sdn Bhd general manager Supun Nigamuni who tells Enterprise: “The audit went very well. It was very nice to see what they were doing. This is a new initiative because we are not looking into ocean plastics but plastics that are bound for the ocean. When you analyse plastics in the ocean, you realise that 80% come from land.

“What this programme is looking into is to cut the 80%, so we don’t have to worry about ocean plastics. We’re looking at mismanaged waste 50km from the shoreline,” he says.

Why did Control Union choose to audit Heng Hiap first? “Heng Hiap was a contributor in helping us develop the standards for this particular process. When the standards were launched on July 8, there were about 20 companies applying for certification but when we did the pre-audit, we realised that most of them were not ready for certification because there were problems in the upstream sorting part.

“Heng Hiap was ready. It was confident enough that its system qualified without even going through pilots or trials. So we agreed to audit Heng Hiap first,” he says.

Supun says Heng Hiap collects plastic waste itself as well as through volunteers and small independent collectors. “Heng Hiap is responsible in terms of monitoring, collecting and transporting the waste. They can credibly assure that the plastics they claim as OBP originate from up to 50km of the shoreline.”

Heng Hiap Industries founder and chief executive officer (CEO) Seah Kian Hoe says this makes it twice that the company has been audited by Control Union, the first being for its Global Recycle Standard (GRS) certification.

“They basically audited our entire chain of custody to prove that our recycled plastics are 100% from post-consumer scrap within Malaysia,” he says.

The chain of custody basically tracks when there is a change of ownership or shape or form of the recycled product. “The plastic actually changes when it is being collected, then separated, crushed, washed, mixed and then finally converted into resin or pellet form.”

The certification is important, especially if the company wants to sell to a large multinational interested in using recycled plastic in their products. “You need to prove to these companies that your product is 100% post-consumer plastic. So we will hire Control Union to come in and audit our traceability to prove that our resin is indeed from 100% recycled materials.”

The latest certification takes it up a notch. Now, not only do companies want to include recycled plastic in their products, they want to use plastics that are ocean-bound, as demanded by conscientious consumers, traumatised by pictures of turtles disfigured by plastic rings or choking on plastic bags.

Seah is particularly proud of the fact that Heng Hiap’s standards, which are the de facto industrial recycling standards in Malaysia, are on a par with the ZPO standards. “They (Control Union) started by looking at all the different ocean collection sites that we have. We laid out all our sites and they chose which to inspect. I believe they inspected seven sites on the shoreline itself, which is the beach.

“We actually went to the beach to show them our protocol in collection, fulfilling the United Nations (UN) protocol in ocean plastic collection,” Seah says.

In ocean plastic collection, this means creating a zone, for example of 20 by 200 metres from where the water is, to collect plastics. “There are five collectors in one zone who do the work for 90 minutes. And for each zone, there are five types of material to be collected: big plastics, micro plastics or plastic debris (any plastic object smaller than a human palm), wood and organic materials (leaves, branches and dead tree trunks), metal and aluminium and, finally, mixed scrap, that is, scrap not covered in the other categories.

“So we showed them how we performed on-site and they basically audited the processes to see if we were following our protocol and whether all the scrap collected was properly weighed and documented.”

All the scrap needs to be properly documented for traceability purposes. “Whatever is collected comes to our recycling facility and we showed how it is separated, crushed, washed and then turned into an end product. So they tracked the entire chain of custody, which we sometimes refer to as provenance.”

Heng Hiap does the same thing for river waste. “We showed them how we do our protocol at rivers as well.”

Control Union also went to see if all the paperwork was in order. “They looked to see that we had all the proper business and manufacturing licences as well as whether our various ISO (International Organization for Standardization) certifications, be it ISO 9001 (quality management system), ISO 14001 (environmental management system) or ISO 45001 (safety and health management), were all up to date. Lastly, they checked our social compliance to see whether we treat our workers fairly and fulfil all international standards with no abuse, child labour or discriminatory standards.”

Seah says Control Union checked Heng Hiap’s documentation and interviewed its workers: “Our employees from the shop-floor, executive level and managerial levels [were interviewed] to make sure that all the documentation and equipment that we are using are up to date as in properly calibrated and documented.”

Were there any issues? “They did make some comments on how we need to be even more thorough in separating our scrap. Our shoreline scrap cannot mix with our waterway scrap because once you mix them, you lose the integrity of the traceability.”

Seah says previously big brands would tell consumers that they could not find any high-quality socially and environmentally-compliant ocean plastic supplier.

“Their previous thinking was that recyclers were not up to par in terms of quality, industrial standards and also professionalism demanded of the champions. They need all these high standards and high-quality sources checked before they could offer the product to the conscientious consumer. At the time, we were still missing the Ocean Bound Plastic Certification,” he says.

Now, armed with the certification, it is ready to approach global brands. “We can say we are ready; this recycler can give you everything you ask for. So now, you will see a lot more action going on and that will kick-start a very exciting journey where we will see brands adopting ocean plastic in their products.”

He adds that getting the proper certification is the “soft” part of the business. “Our company is enabled by 18 IPs (intellectual property) which can help us upcycle the ocean plastics that we collect. Traditionally, people think recycling would down-cycle the quality.

“In our case, we are able to make better products than before. We use a technology called near-infrared, which helps us automatically separate the plastic material into polymer types. It gives us very high polymer purity.

“And we also use X-ray frequency technology to help us detect the level of heavy metal contained in the plastic. We have a process, pyrolysis, to extract heavy metal contaminants. We actually use high temperatures and convert the plastic back to its original gaseous state and from that gaseous state, we can condense it to become green diesel. These are some of the IPs that we are dealing with at this point in time,” he says.

Is he looking for investment to upscale in light of the expected increase in demand following this certification? Yes, says Seah. “We need investments in terms of talent, bandwidth and technology.”