WHILE the removal of High-5 Conglomerate Bhd from Bursa Malaysia is negative for minority shareholders, the company sees the delisting on Oct 24 as an opportunity to put its house in order at a more realistic pace and lower cost.

In an email interview with The Edge, Vincent Chew, who heads the team that is spearheading High-5’s turnaround plan, says it will have the “freedom” to execute a proposed regularisation plan.

Had the bread maker received the stock exchange’s blessing to go ahead with the restructuring plan when it was still listed, it would have needed to report a net profit for two consecutive quarters to have its Practice Note 17 label removed.

“Upon delisting, [High-5 is no longer restricted to having to show] short-term profitability within two quarters. This will facilitate more sustainable long-term profit planning,” says Chew.

He is the main partner of Covenant Equity Consulting Sdn Bhd, which was appointed adviser to the management committee of Silver Bird Group Bhd — as High-5 was previously known — in late 2012. Another of Chew’s firms, PKF Malaysia, had earlier signed off on the forensic report on Silver Bird.

The forensic report was commissioned by Silver Bird in February 2012, following allegations of irregularities in its accounts, among others.

High-5’s removal from the stock exchange came about after its appeal against the rejection of its proposed regularisation plan and delisting was rejected by Bursa. The plan, which was revised in February, included a capital reduction exercise, debt restructuring and issuance of rights shares with warrants to trim the company’s accumulated losses and debts.

Its share base of 406.68 million shares as at January would have ballooned to 3.796 billion if all the warrants and share options had been exercised. The bread maker expected its borrowings to drop to RM33.102 million from RM183.15 million as at October last year, although the figure rose to RM215.01 million at the end of its third quarter ended July 31 (3QFY2014).

In August, Bursa expressed its lack of confidence in High-5’s ability to be profitable in its current business of manufacturing breads when it had been making losses. It also doubted the group’s ability to remove its accumulated losses in full and questioned whether it would be able to continue operating at its existing location.

“I obviously do not agree with Bursa’s conclusions, as signs of achieving profitability are intact and will be more pronounced once the proposed restructuring is completed and the company will provide more security to its trade partners,” Chew says.

“Furthermore, a financially stable High-5 will facilitate its ability to rent new premises, if necessary. Additionally, although only some lenders have expressed in writing their support for the proposed restructuring plan, the support of the majority, if not all, of the lenders, is implied through the absence of their objection to the restraining orders obtained by High-5.” 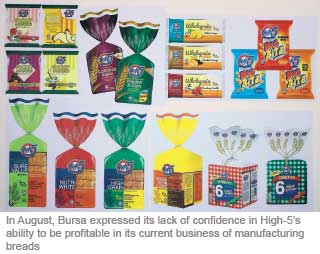 Although he does not specify when, Chew says there will be a timeline for High-5 to turn in a profit, adding that it is the group’s intention to have the shares relisted in three to five years.

This may sound like a long time for shareholders, who have been holding on to High-5 while it swung between 3 and 13.5 sen in the year to Oct 20, when the company announced that Bursa had dismissed its appeal.

However, as Chew argues, High-5’s turnaround story will hit a high note once the restructuring exercise is completed. For now, he says the group needs an estimated RM50 million to reorganise its distribution network, which will then lead to improved efficiencies and profitability.

Chew says there was an improvement in sales despite the Hari Raya holiday — when sales are usually at their weakest.

“More importantly, the framework of losses has changed in that the cost structures have reduced and continue to show a downward trend moving into 4QFY2014, and sales growth continues to be achieved,” he says.

He adds that High-5 has a market share of 9% compared with 7% in April.

Chew is confident that the bread business will be spared from the negative effects of the rising cost of living and the implementation of the Goods and Services Tax given that bread is a staple food.

“Bread and its related products are still the cheapest form of nutrition in the country. Thus, any downturn in the economy should provide for increased consumption. Also, a significant portion of High-5’s business is from Singapore, and plans to expand to Southern Thailand and Batam are being initiated,” he says.

High-5’s penetration into the retail business with the purchase of premium bakery PastryVille will see more outlets from the current five. Chew says High-5 plans to increase the distribution of its daily fresh products and fresh cakes from its central kitchen to third-party cafés and restaurants.

With its shares no longer publicly traded and High-5 out of public scrutiny, the management may breathe easier. However, for the minority shareholders, few may see the silver lining.