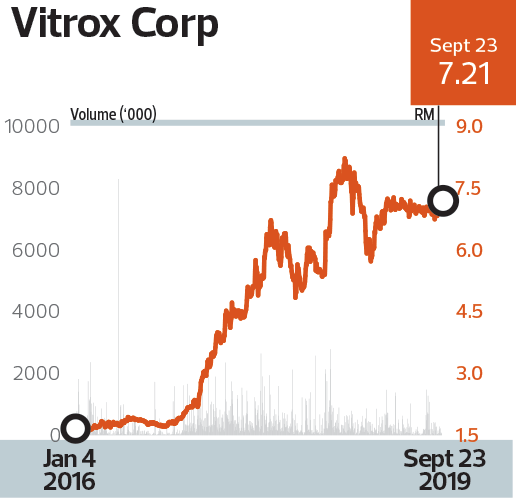 The impressive PAT growth is in line with its revenue growth, which has more than doubled since FY2015.

Despite the escalating trade tensions between China and the US, which raises concerns that companies along the supply chain of the semi-

conductor industry will be hit hard, ViTrox’s revenue expanded to a record high of RM394.7 million in FY2018, a 20.5% increase from the year before.

The stellar earnings performance made

ViTrox one of the four joint winners of the award for highest growth in profit after tax over three years in the technology sector.

It is worth noting that since it was listed on Bursa Malaysia, the equipment inspection solution provider has recorded 18 consecutive years of profitability.

However, for the second quarter ended June 30, 2019, ViTrox showed signs of weakness. Its net profit fell 12% to RM24.4 million from a year ago. Profit for 1H2019 only made up 39% of full-year estimates due to the weaker-than-expected revenue numbers.

Quarterly revenue came in at RM89.03 million, a year-on-year contraction of 15%. According to Maybank Investment Bank Research, this was the first quarterly contraction after 15 consecutive quarters of growth.

“Despite the softer market conditions in 2QFY2019, we applaud ViTrox’s capability in sustaining operating margins with constant innovation of product offerings and higher service revenue from its installed base of equipment. This softened the weak revenue impact on the bottom line; core net profit was down a smaller 13% y-o-y,” said the research house.

The outlook for the sector is expected to be less vibrant. SEMI, a global industry association for the electronics sector, predicts that global sales of semiconductor manufacturing equipment by original equipment manufacturers will drop 18% to US$52.7 billion this year, reflecting the increasing market uncertainty due, in part, to geopolitical tensions.

Will that throw ViTrox off its course?

Maybank IB Research calls the softer 2Q earnings a “blip” and believes that ViTrox is still the best equipment player to ride the next semiconductor upcycle, premised on 5G network deployment.

Hong Leong Investment Bank Research believes that the technology company is poised to win more market share with the advent of global semiconductor growth, leveraging its technology leadership in machine inspection, especially in 3D-AOI and AXI.