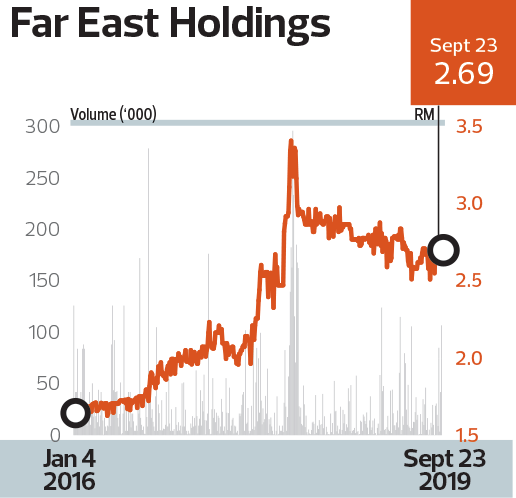 Far East Holdings Bhd is not a new kid on the block in the oil palm plantation industry. The group was established in 1973 and has been listed on Bursa Malaysia since 1991.

While it is not always regarded as one of the big listed plantation boys, it beat its peers in generating returns to shareholders over the past three financial years.

Far East is quite some distance ahead of the two joint second-placed companies — both of which generated a 5% return to shareholders in the three years under review.

On top of that, the group undertook a bonus issue on the basis of two new shares for five existing shares held, followed by a subdivision of three shares for every share held after the bonus issue. As a result, Far East’s share capital was enlarged to 593.83 million shares from 141.39 million previously.

In short, a shareholder who held 1,000 shares would have 4,200 shares after the bonus issue and share subdivision.

Besides the bonus issue, the plantation firm also declared a dividend of three sen per share in FY2018, and 35 sen in both FY2017 and FY2016 (based on its initial share base).

In terms of earnings, FY2018 was not a good year. Far East was not spared the problems faced by other plantation companies, such as soft crude palm oil prices and a shortage of labour that resulted in delays in harvesting the fruits.

In its 2018 annual report, Far East pointed out that its average cost of fresh fruit bunches increased 24% to RM219 per tonne compared with RM177 the year before. On the other hand, it secured lower average CPO price at RM2,316 per tonne, from RM2,771 a year ago.

Far East has a cash-rich balance sheet with zero debt. Its net cash pile shrank to RM34.6 million in FY2018 from RM141.8 million the year before. The group spent RM109.62 million to buy 3,204.94 acres of plantation land from PHG Plantation Sdn Bhd.

That said, its cash reserves, which amounted to RM289.05 million as at Dec 31, 2016, have been dwindling in the past three financial years.