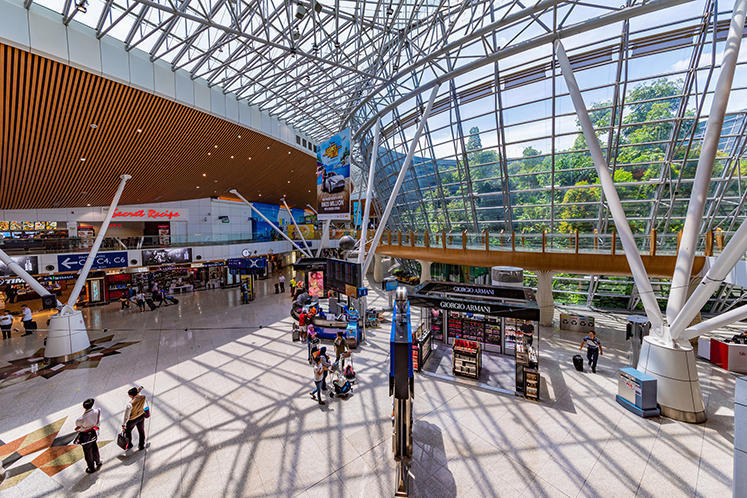 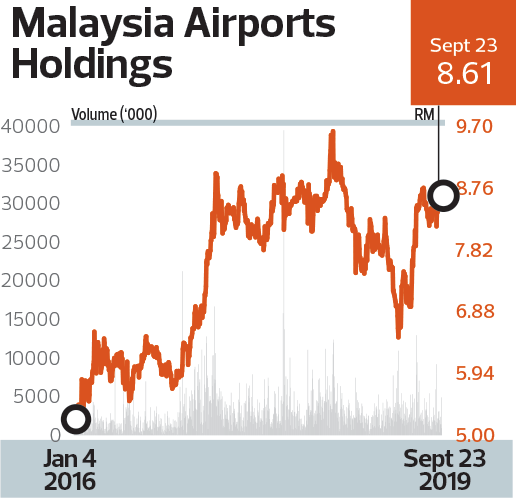 Malaysia Airports Holdings Bhd’s (MAHB) earnings for the past three financial years between the financial year ended Dec 31, 2016 (FY2016) and FY2018 increased by leaps and bounds.

Such an impressive jump in its earnings was mainly driven by the hike in passenger service charge (PSC), coupled with lower depreciation and amortisation in FY2015. Furthermore, the group booked an unrealised gain of RM258.4 million from its financial assets’ fair value, which helped boost its net profit in FY2018.

It climbed to an all-time high of RM9.63 in August 2018, but lost some ground as profit-taking emerged amid weak market sentiment across the board, coupled with concerns that the implementation of the quality of service framework will add costs to MAHB.

Nonetheless, interest in the stock picked up when the government announced its intention to adopt the Regulated Asset Based (RAB) model for MAHB. The RAB model will help offload the capital expenditure burden from the government by granting guaranteed returns for MAHB’s future investments. Given the likely new operating landscape, MAHB’s earnings prospects are expected to be more promising.

MAHB has been consistently rewarding its shareholders with ever higher dividends as its earnings expanded. Its dividend per share rose from 10 sen in FY2016 to 13 sen in FY2017 and 14 sen in FY2018.

MAHB owes its consistency and steady performance to the nature of the airport industry and its own structural dominance.

In the group’s FY2018 annual report, CEO Raja Azmi Raja Nazuddin told shareholders that the year was a challenging one for Malaysia’s aviation industry due to uncertainties on the global and regional fronts.

“The interim increase in fuel price, US-China trade tensions, natural disasters and an aircraft crash incident in the region had to some degree affected the growth momentum,” he said.

Raja Azmi, who took over the helm in January 2019, said MAHB must continue to achieve greater operational integration to unlock synergy.

“We will continue to strive to create a conducive environment for innovation and new ideas, to expand our knowledge base and to reduce bureaucracy and expedite the decision-making process,” he said.

Raja Azmi highlighted that a new business plan is expected to be launched next year, which will guide MAHB through the medium and longer-term horizons.

“We have strengthened our fundamentals and accelerated our pace towards charting a better future. We will also continue to emphasise building mutually beneficial relationships with all airline partners while developing a world-class service-oriented culture,” he said.

Raja Azmi pointed out that MAHB views the new RAB framework positively as it will allow the group to earn a fair rate of return for any capital invested for airport development.

“It will also allow us to ensure sufficient airport capacity and that high standards of facilities services are maintained,” he said.

In June, the Malaysian Aviation Commission published a consultation paper that shed more light on MAHB’s RAB framework, which includes a nominal pre-tax weighted average cost of capital of 10.88%, a new transfer PSC and three options of the PSC model proposed by the airport operator.

Recently, the Ministry of Transport announced that effective Oct 1, the PSC for international flights for destinations beyond Asean will be lowered to RM50 from RM73 at klia2 terminal and other airports in the country. The rate at KLIA will, however, remain at RM73.

For Asean and domestic flights, the PSC remains at RM35 and RM11 respectively.

The announcement sparked a round of selldown on MAHB, but analysts doubt this will significantly impact the group’s bottom line, as the government will compensate the difference.