How I beat the taxi rogues at their game 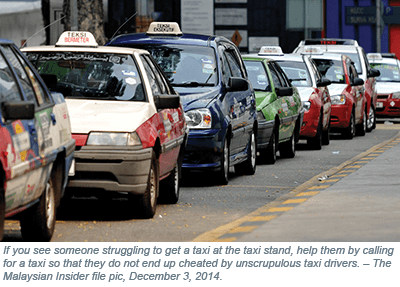 RECENTLY, I was walking in front of NU Sentral, the new mall in front of the KL Sentral transport hub in Brickfields. I had just arrived at the monorail station and was heading home to my apartment a short 10 minutes away.

I noticed a well-dressed man, possibly in his 30s, who seemed troubled after enquiring with the drivers of a few taxis that were parked in front of NU Sentral.

As he walked along, I caught up and enquired as to where he intended to go. He told me he needed to go to Puduraya to take a bus to Bandar Seri Iskandar in Perak.

So I offered to help him get a taxi. I used one of the two taxi apps I had downloaded on my phone and booked him a taxi, which arrived in a matter of 10 minutes.

I continued walking with him until we reached the PosLaju office. I wanted to be discreet and avoid any trouble from the aforementioned taxi drivers, should they see me helping out this stranger to get a taxi. So, PosLaju was the nearest landmark chosen to be the pick-up point.

While waiting, he told me that he was from Pakistan and working as a lecturer at Universiti Teknologi Petronas (UTP), which is located in Bandar Seri Iskandar. He had a PhD in Chemical Engineering, incidentally. He came to Kuala Lumpur for some meetings over a few days and was heading to Puduraya to take a bus back to Perak.

This was a weekday and he had to start work the next morning, so he was getting nervous about getting to Puduraya in time to catch the bus.

He said the taxi drivers were asking RM30 for the short journey of about 3km and under 10 minutes, even with a bit of traffic jam. I am not sure how much a foreigner working as a lecturer in UTP makes but I am pretty sure he could afford it if he was really desperate.

Oh, and I also told him not to get confused if he gets to Puduraya and sees the sign Pudu Sentral on the building. That was just another bad decision by our prime minister.

As I walked home after making sure he got into the right taxi, the whole experience set me thinking: what if more people could do this, every day, at all the hot spots where these rogue taxis are hanging out?

My experience proves one person can make a difference, but if many more join in this simple task, we could soon see the end of these taxi drivers who only want to fleece locals and tourists.

By the way, I don’t think these rogue taxi drivers are lazy or just trying to make ends meet with their antics. I dare say they are crooks, no different to snatch thieves and robbers.

Since the authorities are not doing anything about it, we the people have to do what we can.

Here is what we can do to raise the standard of taxis in the Klang Valley, and for that matter in other major urban areas covered by the taxi app service, such as Penang and Johor Baru.

Get together with friends, or even as an individual, before or after work, or during your lunch break – actually, whenever you have time to spare – and help someone get a taxi when you see them struggling to find a taxi that is willing to use the meter.

If one wants to take this further, especially college kids, get a group together and start a flash mob and put up some handy signs stating your mission – that is, to Raise Taxi Standards.

Use the taxi app to request for a taxi and let the passenger pay the full fare at the end of their journey. The passenger only pays a premium of RM2 over the metered fare for the request service, similar to how one pays a surcharge for the call/radio taxi service we have always had.

I also throw this challenge to both Easy Taxi and MyTeksi. If they are serious about wanting to change the taxi landscape for the long-term good of all commuters, go to the ground and pursue this action on a daily basis.

There are many benefits to this simple action, the ultimate of which would be that the rogue taxi drivers will realise they have to get off their butts and look for passengers like everyone else.

One other benefit for those coming from KLIA is helping people avoid paying a ridiculous amount from the taxi coupon stand at KL Sentral.

I did think about requesting for the Uber X or Uber Black car hire service, too, but of course, that would not work out as Uber is cashless and I don’t think I would want to pay for a stranger’s taxi fare...  well, unless it is someone who could use such help.

Living in Brickfields, one does see a lot of partially or fully blind people walking along the shops, to and from the Malaysian Association of the Blind building, which is located on the road facing Sungai Klang.

Even if we don’t do any other charitable activity, this is one simple gesture which I think that one can commit to every now and then.

So, if you see a blind person waiting for a bus or a taxi, give them a break, request for an Uber car, or if there really is none, then request for a taxi using the other two apps and just pay a reasonable estimate to the driver to cover the cost of the journey. Any balance can be his tip.

Let’s get this going folks. Pass this message along and let us all Raise Taxi Standards. -– The Malaysian Insider