How much taxes do gaming companies, NFOs and breweries pay? 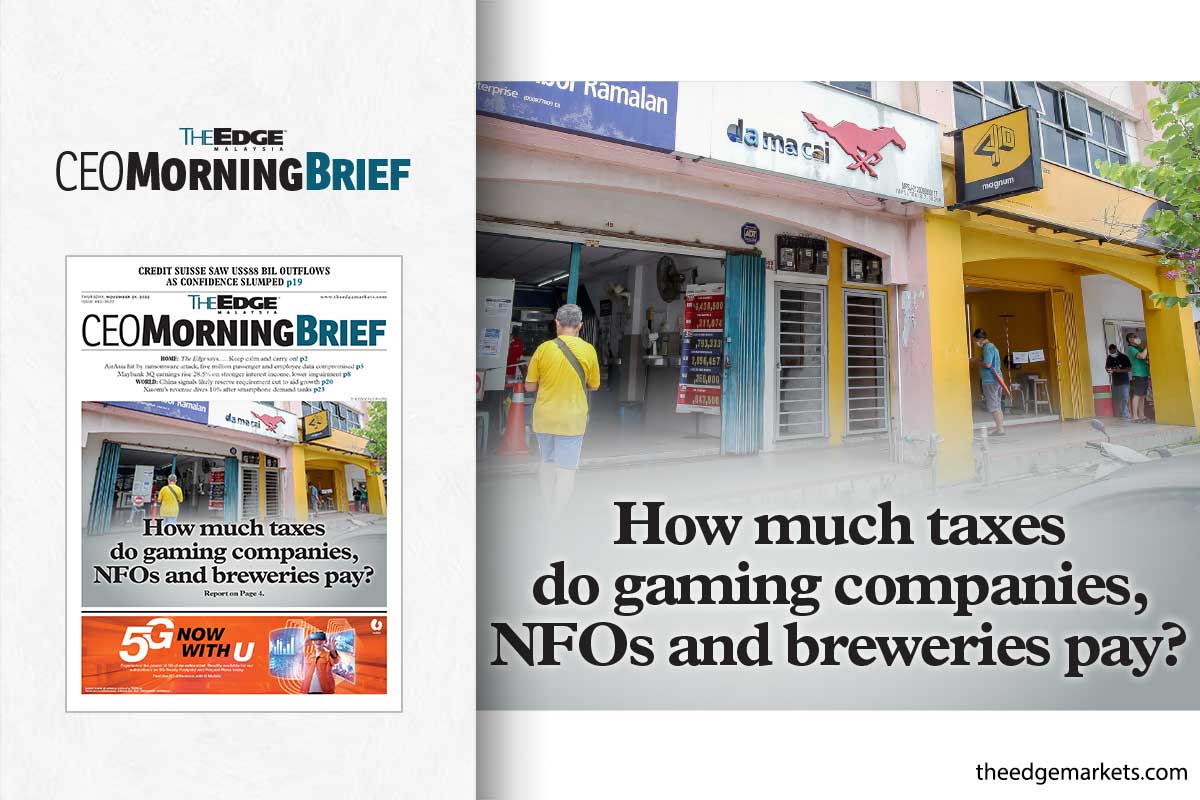 KUALA LUMPUR (Nov 24): As the leading political parties negotiate for a coalition they could work with to form the federal government following the just-concluded 15th general election (GE15), fears that policy changes under a more conservative administration could curtail the operations of gaming companies, number forecasting operators (NFOs) and breweries that have contributed RM1.86 billion in income taxes in the last two financial years, continue to weigh on the market.

Since Monday (Nov 21), a total of RM3.38 billion have been wiped out from the market capitalisation of the six casino and gaming operators, and breweries listed on Bursa Malaysia, indicating uneasiness among investors to the strong showing by Islamist party PAS in GE15, which was held on Nov 19 (a Saturday).

It is not clear at the time of writing as to how much income taxes was paid by Pan Malaysia Pools Sdn Bhd, which operates Da Ma Cai, as it is not a listed entity.

According to The Confederation of Malaysian Brewers Bhd (CMBB), brewers in Malaysia alone generate RM3.7 billion in taxes, profits and salaries, which is equal to 0.3% of the country’s gross domestic product.

What is more, the contribution from the gaming industry could be more than the income taxes stated in their annual reports, given that for casino operators, the reported revenue is net of VIP commissions, and sales and services tax.

As for the NFOs, there are three levels of taxes — netted off when arriving at net gaming revenue, then under cost of sales, and finally, the usual corporate income taxes, a gaming analyst explained.

While these companies over the years have grown accustomed to increasing federal government taxes and higher excise duties imposed on them, the risk of surprise taxes for these sectors was always on the horizon.

In fact, in the 2022 economic report released by the Ministry of Finance (MOF) ahead of the 2023 budget tabling in Parliament, the government forecast a 4.3% increase in indirect tax revenue to RM53.2 billion next year — an indication that more tax restructuring is likely next year.

“While we were very well aware at some point in the future [that] these sectors will be slapped with surprise taxes, the current sharp selldown in these sectors is purely driven by negative sentiment.

“The market also looks at past events such as how Kedah Menteri Besar Datuk Seri Muhammad Sanusi Md Nor [had] banned the operations of number forecasting operators in the state last year.

“The sentiment tilted to the negative on fears that such curbs and limitations to business could be cast nationwide in the future, should the government become more conservative,” said a senior trader with a local brokerage.

Last November, the state of Kedah banned the operations of all gaming shops in the state, by not renewing their business licences issued by the local councils, in a move to tackle the ills resulting from gambling.

Muhammad Sanusi said besides the betting sport, the state would also introduce curbs on the sale of alcohol in rural parts of Kedah.

“Considering that PAS has won parliamentary seats in parts of Perlis, Kedah, Kelantan, Terengganu, Pulau Pinang, Perak, Pahang, Selangor and Melaka, we are cautious that the ban and restrictions on selling alcohol may extend to more states or areas, moving forward. Therefore, this may dampen brewers’ sales growth in the near term,” said Affin Hwang Investment Bank in a report on Nov 21.

The last hike on gaming taxes was when Pakatan Harapan (PH) came into power in 2018, after defeating the ruling coalition government Barisan Nasional (BN) in the 14th general elections (GE14).

On top of that, the MOF has increased the annual casino licence fees by RM30 million to RM150 million, and machine dealer’s licence fees to RM50,000 a year from RM10,000 a year.

It is believed that this was the first hike in casino duties in 20 years.

The previous increment, from 22% to 25% currently, was in 1998, when the government needed the extra revenue boost for pump priming measures during the 1997/98 Asian Financial Crisis.

“With PAS having won a sizable number of parliamentary seats, investor sentiment on gaming stocks will be negatively impacted, given fears of potential tax hikes and/or restrictions within the space; for example, hiking casino duties and non-renewals of NFO operating licences,” said Affin Hwang.

However, it said tax hikes will not be implemented abruptly, given the sizable taxes paid by the industry.

In GE15, none of the coalitions managed to secure a simple majority of 112 parliamentary seats (out of total 222) to form the Federal Government, leading to a hung Parliament.

PN (led by Bersatu’s Tan Sri Muhyiddin) saw a sizeable increase in the number of seats won at 73.