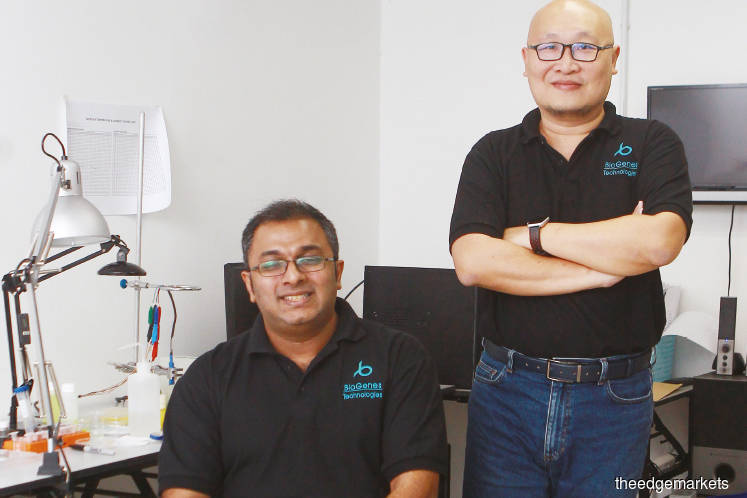 From left: Founders Joseph and Tang

When viruses and bacteria attack the body, the immune system sends out an army of antibodies — our unseen heroes — to fight off these harmful foreign substances.

Consequently, antibodies are used by researchers to create diagnostic tools that can detect the presence of specific viruses or bacteria. They are also used in vaccine research and the development of anti-venom, which is used to treat people who have been bitten by poisonous snakes or insects.

But there is a catch. To produce antibodies for these purposes, countless animals such as goats and rabbits have to be sacrificed.

“Currently, there are two ways to produce antibodies in the global market. One is by injecting the target molecule [which could be the disease-causing organism] into the animal. The animal’s immune system will respond to it [by creating antibodies]. The antibodies are then harvested from the blood of the animal,” says Tang Kok Mun, CEO of Biogenes Technologies Sdn Bhd, which specialises in molecular diagnostics and genomics.

To find antibodies that will respond to swine flu, for instance, the animal has to be infected with the disease first. The antibodies, which the animal’s immune system synthesises in response to the flu, are then extracted. The animal, which may suffer from the side effects of the disease, is often euthanised after it is no longer useful.

“The alternative methods still require you to infect the animal with the disease. But you can harvest a cell [and antibodies] from the animal and reproduce the cell indefinitely in a lab,” says Tang.

However, this is a more advanced method that requires a higher investment and the use of expensive equipment.

Another alternative, called phage display, involves the insertion of genes into a virus or bacteria. These microorganisms are then cultured in a lab to produce the required antibodies. This method requires much more work. It is also costly and more prone to errors, according to Tang.

Already, there are campaigns against this cruel treatment of animals. According to a report in the Cell Press Journal in 2013, 9,500 animals were used for antibody production in the UK alone. The EU passed a directive in 2010 to regulate and protect animals in scientific research, with the goal of replacing all animal research with non-animal methods.

“Apart from the emotional trauma of killing animals, these procedures are very expensive. If the animal dies halfway during the process, you have to start again. It also takes more than a year before a diagnostic tool and vaccine can be created from this process,” says Tang.

Tang, who has a background in chemical engineering, often engages with universities in Malaysia to look for research that can be commercialised. He soon realised the extent of this problem among researchers.

In 2015, Tang decided to take the leap and launch Biogenes to tackle the problem. He approached Adrian Joseph, who had been commercialising biotech projects for Malaysian Bioeconomy Development Corp Sdn Bhd for four years, and offered him the post of chief operating officer. He also recruited Cheng Kim Sing, who had studied microbiology and had experience in marketing diagnostic and molecular products, as chief marketing officer.

“We kept hearing complaints from researchers. They would start to work on a disease and the animal died, for instance. Or they had to wait for a long time before they could get antibodies to start their research process,” says Joseph.

With a grant from PlaTCOM Ventures Sdn Bhd, the team worked with local researchers to find a solution. In a little over a year, they succeeded.

They managed to create synthetic antibodies — called aptamers — that can replace animal-harvested antibodies for molecular diagnostic applications in human healthcare, animal breeding, agriculture and food safety. No animals are used in the process.

They also created a digital tool called APTCAD, which can create aptamers 20 times faster and more cheaply than the conventional method to create antibodies, according to Biogenes. This process has been patented by the company.

“We design aptamers digitally and use algorithms to find the most optimum fit [between the aptamer and target molecule]. Only then do we synthesise the aptamer and test it in the lab. We then incorporate the aptamers onto our biosensor platform to develop the diagnostic tools,” says Tang.

Most other practitioners still use lab-based processes to create antibodies, says Joseph. “We have found a way to map the entire biochemical interaction [between the target molecule and aptamer] digitally. And this process is just the discovery stage. The manual method takes almost eight months [to complete the discovery stage], but our process can be done in two months.”

They start by identifying the target molecule’s profile in a protein database, which contains the structure and coordinates of the molecule. The information is then keyed into APTCAD, where the team examines the crevices in the molecule. It is like reverse engineering a key by observing the patterns in a lock.

“We design a shape that can fit into the crevices precisely. The software can calculate the best fit. Once we get the molecule sequence from the calculation, we synthesise the aptamer in the lab,” says Tang.

Right now, the hard work lies in finding the best fit between the aptamer and target molecule. In the future, this could be a process that can be tackled by artificial intelligence. “That is where we aim to go once we have more data points,” says Joseph.

With these solutions, Biogenes can accelerate the R&D process. More tests can be done by researchers in a short period of time and the results can be validated quicker. “The researchers can then focus on studying the disease and finding ways to make their solutions work,” he says.

Bringing the lab to the field

If the key is to enable researchers to perform diagnoses and validation in a shorter time frame, why not assist them to do it on the field? That is why Biogenes provides portable diagnostics and printed sensors alongside APTCAD. These products are light, small and can be easily used on the field.

“The very nature of our technology helps you go outside and try it on the field. In most cases, the researchers have to wait for results from the lab after they do the sampling [of the target molecule]. Now, they can do it in one go,” says Joseph.

The printed sensors are tiny strips of biosensors that are shorter than a finger. At the end of the strips are the aptamers that can bind with the target molecule. If a binding occurs, it means the target molecule is present in the substance that the researcher is testing.

After the substance that potentially contains the target molecule is put on the biosensor, the strip is inserted into a reader, which could be a portable machine or even a mobile phone. The reader displays the signal generated if the target molecule and aptamer bind. The blood glucose meter and pregnancy test kits are examples of biosensors.

“We are doing the same thing, but for cancer markers, pathogens, viruses, bacteria and toxins. Our vision is to have a universal reader with different sensors for different diseases,” says Tang.

Its solution enables results in 30 minutes.

Biogenes is currently working with researchers to detect streptococcus B, an infection that affects babies less than six months old. “If pregnant mothers have this infection and transfer it to their babies, the babies could die in the first six months of their lives because they do not have a strong immune system. We are still looking for the right partner to commercialise this solution,” says Tang.

Other projects they are working on include the detection of foot and mouth disease among cattle. It is a very infectious disease that once detected, can require a whole herd of cows to be culled. Biogenes is also creating a biosensor for the Fusarium fungi that infects Cavendish bananas globally.

In the healthcare sector, the company is working on two projects. The first is to detect sepsis, which occurs when a wound is infected by bacteria. “You can die from blood poisoning due to sepsis. In a lot of emergency cases, the doctors cannot figure out if the person is sick because of the infection or the injury. It takes time to test for sepsis in a lab and this is one of the biggest causes of death in a hospital’s emergency department,” says Tang.

Biogenes’ other project is looking for the biomarkers of colorectal cancer. A biomarker is a measurable indicator of the presence or severity of a disease.

Theranos Inc is the infamous blood-testing start-up in the US that started to fall apart in 2015 after the media found its claims to be misleading. The company, which counted many prominent figures among its investors or on its board of directors, had claimed that its technology could analyse a customer’s physiological status with just a drop of blood.

As with most companies in biotechnology and healthcare, it was difficult for laymen to verify these claims. Theranos did not submit its technology for peer review in medical journals, according to reports. Even then, it managed to score huge clients and investors.

Biogenes Technologies Sdn Bhd is taking a different route. It is working with researchers first. According to its founders, the company has relationships with 20 universities, including the Infrastructure University Kuala Lumpur, Universiti Kebangsaan Malaysia, Universiti Putra Malaysia and Monash University.

“The researchers will run the R&D and publish their paper with our tools. When they finally create the diagnostic kit, we can help them put everything together,” says Biogenes chief operating officer Adrian Joseph.

“We are in a field where validation and peer-reviewed trials are very important to validate our technology. We have to work with partners to do this,” says CEO Tang Kok Mun.

Biogenes is working on a wide variety of projects, from healthcare to agriculture. The cost is on a case-by-case basis. According to the founders, one project can start from as low as RM20,000.

“Researchers have become our primary target market. We realised that there is a business in supporting their work as they use a lot of diagnostic tools,” says Joseph.

“In Malaysia, a lot of our industries are simply producing things that others have already done. But if you look at our researchers, they are doing cutting-edge things. The problem is, after they have published their research, they cannot commercialise it because it is not within their expertise or job scope. That is where we work with them to bring the research to commercialisation,” says Tang.

The founders plan to bring their products overseas. But they are still at the beginning stages of marketing their solutions to potential clients. In the future, they want to take on commercial clients to produce drug-related diagnostics.

“I think our cash cow will be the work we do with researchers. But the blockbuster deals will come when bigger companies see our aptamers and want to license [our technology],” says Joseph.