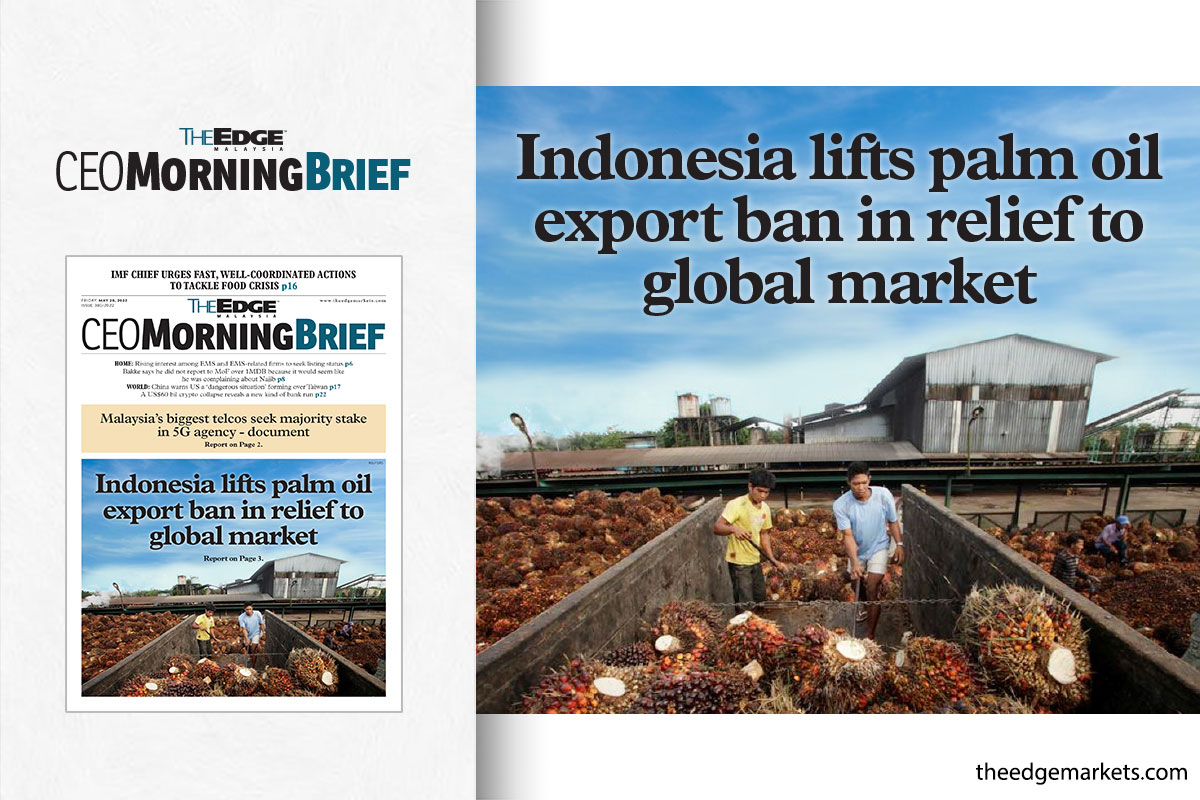 (May 19): Indonesia, the world’s biggest shipper of edible oils, lifted a ban on palm oil exports in a move that will bring relief to the global market after the war in Ukraine choked off critical supplies.

Palm oil exports can resume from May 23, President Joko Widodo said in an online briefing on Thursday. This is after considering improvements in local supply and prices, as well as the 17 million workers in the industry, he added.

Indonesia’s ban, which was imposed since April 28, was one of the biggest acts of crop protectionism since Russia’s invasion of Ukraine, which stymied exports of sunflower oil and worsened a global shortage. Palm oil is used in everything from food to soap to fuel, and the move by Indonesia threatened to push up costs even more across multiple supply chains at a time of rampant inflation.

“Consumers can breathe a sigh of relief now,” said Gnanasekar Thiagarajan, head of trading and hedging strategies at Kaleesuwari Intercontinental.

The government has struggled to control prices and secure local supplies since December, with a raft of measures ranging from price caps, to export curbs and cash handouts for households and hawkers. But all that failed to pull down prices to the government target of 14,000 rupiah (97 US cents) per liter of bulk oil. The surging costs helped push inflation to a three-year high in April.

Indonesia’s ban was widely anticipated to be short-lived. Gro Intelligence, an agricultural analysis firm, said that the government could be forced to relax the move by the fourth week of May to keep storage tanks from overflowing. An industry group also forecast that the policy would end this month.

The lifting of the ban came after hundreds of farmers rallied to protest the move, saying their incomes have suffered because prices of their fresh fruit bunches plunged. A survey this month showed the approval ratings for Jokowi, as the president is popularly known, hit the lowest in more than six years due to Indonesians’ growing discontentment over rising prices.

Soybean oil, a substitute of palm, fell as much as 1.6% after Indonesia’s announcement. Palm oil futures earlier closed 1% lower in Kuala Lumpur.

Jokowi said he’s confident that local cooking oil prices will become affordable in a few weeks’ time. The government will improve regulations and procedures for its palm oil export funds, so that it can be more adaptive to domestic supply and prices. Relevant ministers will hold a follow-up briefing at 10 a.m. on Friday.