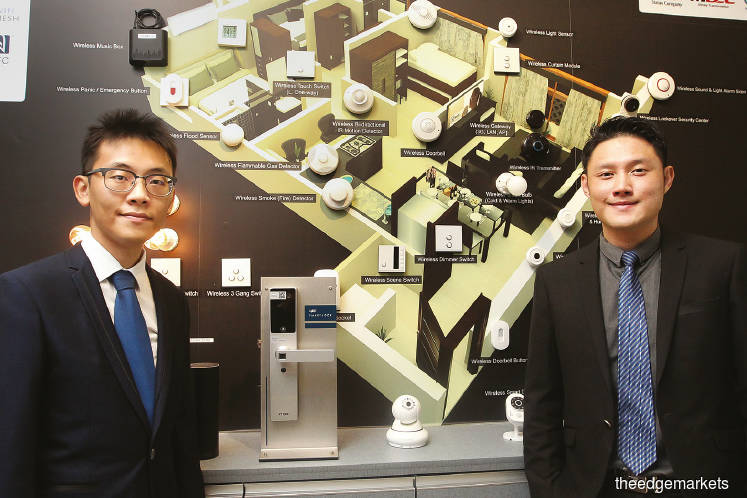 “Change is the only constant” is a common Buddhist saying that encourages people to embrace the volatile nature of life. It is also a quote that probably resonates with many entrepreneurs, including Patrick Au and Alex Leong, the young founders of Vyrox Sdn Bhd.

Au and Leong started the company in 2009 as an Internet of Things (IoT) smart home system service provider. It was their first job out of university, where they had studied mechanical and civil engineering respectively. The idea was simple — purchase smart home devices and set up the systems for homes and businesses.

“We like gadgets and anything related to computers. Back then, Malaysia did not have a lot of smart home devices. So, we bought one from overseas to test it out. It was very expensive. One device cost us about US$400 and a controller was about €500,” says Vyrox chief operating officer Leong.

How did he pay for it? Leong laughs and admits that he got his parents to foot the bill, after telling them that the devices were for the enhancement of the house.

“We bought about 10 devices. Smartphones were not very popular back then, so we had to use the remote control and computer to regulate the lights, air conditioner and home security system, including motion sensors. My parents did not like it at the time,” he says.

Au and Leong persisted in starting their own business. Their first client was a relative of Leong who wanted an automated lighting system for his sports centre. The duo, who were childhood friends from Ipoh, built a control system for the lights and integrated it with software built by Leong’s brother.

Soon, they were customising solutions for residential, commercial and industrial clients. “We sold our services throughout Malaysia and exported a lot of those solutions overseas, especially for customers in the UAE and Dubai. We are quite the expert in internet marketing, which was how these clients found us,” says Au, who is CEO of the company.

Leong has a background in web design and search engine optimisation, so he made sure Vyrox appeared in the top three Google search results for smart home service providers.

Although both of them were young, smart and enterprising, they did face a few bumps on the road, just like any typical entrepreneur.

For starters, they struggled to serve their numerous residential clients with their limited team and the two founders soon faced a series of challenges that forced them to reconsider their business model. They started working with property developers, which meant not just installing smart home systems but also smart building management systems.

“Now, our customers are mostly property developers. Our clients include Mitraland Bhd, SPK Bhd, Selangor Properties Bhd and a few others in Penang, Johor and Kuala Lumpur,” says Au.

The smart home features, which include remote control of the surveillance system, alarm access control system, video intercom and visitor management are only part of the entire package.

One high-profile client is the St Regis Kuala Lumpur residential suites. “We built a smart intercom system. When the customer presses the doorbell, the owner gets a notification on his phone and can unlock the door remotely,” says Au.

They soon came up against a few hurdles. With the residential suites, for instance, Vyrox’s system would only continue being used if the building committee agreed to it. “But they usually want a new system or they do not want to pay the maintenance fee,” he points out.

With property developers, the delayed payment terms is an issue. “Developers have to plan the development one or two years ahead of time and wait another three years for the property to be fully constructed. So, the solution that we build today is only ready for the market five years later,” says Au.

Under the circumstances, Vyrox had to diversify its client base to serve residential, commercial and industrial customers while working with property developers.

The company’s challenges were not confined to issues with its customer base. Technological advancements threw another spanner in the works.

In 2016, Google introduced Google Home, a voice-activated device that can connect and control wireless smart home devices. In 2014, Amazon launched Alexa, which also acts as a hub for IoT devices via voice command.

The market continued to be flooded with smart home devices that customers can buy online and install themselves. Consequently, over the past decade, Au and Leong saw many of their competitors fail and leave the industry.

“The market changes too fast because this is the technology industry. We expect that every two to three years, the technology will change. We are the longest survivor, but we have not achieved success yet. A lot of people who entered the market 10 years ago are no longer in it because they only sold hardware and failed to evolve,” says Au.

These changes forced Au and Leong to adapt. While their strength used to be in customising hardware solutions, they now want to focus on software solutions and becoming a service provider.

“The hardware is already developed by the likes of Google and Amazon, so our position has evolved into that of a service provider or consultant. Now, we are focused on our IoT platform, where we can connect to a lot of sensors or devices and perform big data analysis. We can do energy monitoring, for instance, or analyse device usage for industrial clients,” says Au.

The team is also developing new technologies, such as an algorithm to recognise Malaysian vehicle registration plates, to be incorporated into Homeserva. “China has that technology already, but it can only recognise local cars. We are developing one for Malaysia. If it is in Homeserva, the management can check who has not paid the management fee and maybe block the person from getting in the compound [by scanning the person’s number plate],” he says.

With its core technology, Vyrox can customise solutions for IoT smart homes, smart offices, smart buildings and automated sports clubs. It can use hardware from various sources, including Google, Amazon and Xiaomi.

Vyrox will continue serving customers who want customised solutions or require more complex solutions. For instance, it is attracting quite a bit of interest from the agriculture sector, particularly farmers in Cameron Highlands.

“They need sensors in the greenhouse to monitor soil moisture, humidity and pH levels. We provide the sensors and IoT solution,” says Au.

Vyrox has found a niche in serving customers who do not want to go to the trouble of finding IoT devices that match the smart home system. That is because an IoT device can match with Amazon Alexa, for instance, but not Google Home.

“China also has Xiaomi while Apple has the HomePod. We partnered a good supplier in China that has devices that can match with all the smart home systems. If not, we can custom-make the programme for them,” says Au.

Meanwhile, Vyrox is targeting small and medium enterprises (SMEs) in Malaysia with factories that want to monitor their energy usage. This is a popular product, say the founders, as it can potentially save 20% in electricity bills.

“This system will monitor which areas use the most energy and from there, the SME owners can decide how to improve the machine or whether to get rid of it,” says Au. This system costs roughly RM25,000.

After more than a decade in business, Vyrox is slightly profitable, say the founders, but any surplus is reinvested in the company. The residential market segment will continue to be challenging, but there is potential in the commercial and industrial market, they observe.

“With software, we can do a lot more things. But our core strength is in the customisation of software and hardware for IoT services now. It is not easy, especially since hiring a strong programming team is expensive,” says Leong.

That is why Vyrox plans to offer programming classes to children as part of a corporate social responsibility project. “We will develop the software and integrate the output of the system [to the hardware]. Five or six years down the road, the software will still be there. So, I think it is a more sustainable business,” says Au.