Corporate
Court
From The Edge 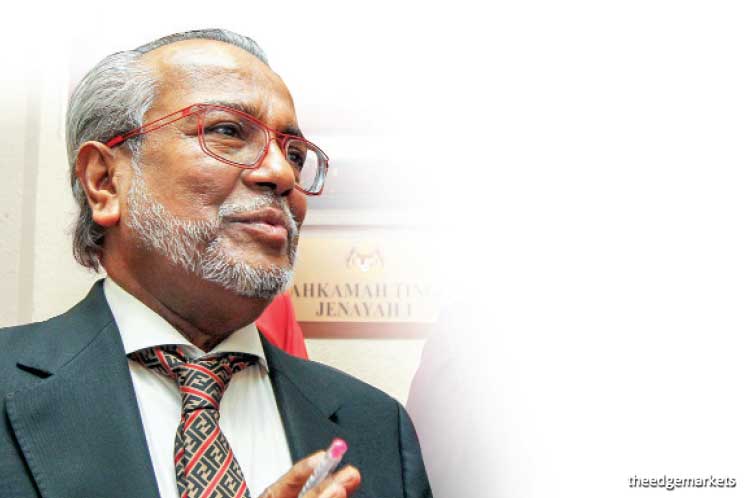 Muhammad Shafee had a family function yesterday, which was attended by his sister-in-law. (Photo by Kenny Yap)

The trial was scheduled to go on yesterday after a long hiatus since November, but was postponed again as the lawyers were instructed to self-quarantine after its lead defence counsel Tan Sri Muhammad Shafee Abdullah was in proximity with someone who is currently being tested for the virus.

According to Shafee & Co counsel Noor Farhah Mustaffa, the whole team has been instructed to sequester themselves as there is a risk that the virus could spread.

Noor Farhah told Justice Sequerah that Muhammad Shafee had earlier received a phone call saying his sister-in-law has been instructed to get tested for Covid-19 in Hospital Sungai Buloh.

She is currently awaiting her test results.

Muhammad Shafee’s sister-in-law works in Sirim Bhd, and was in close contact with one of its employees who has been tested positive for Covid-19.

The two sit next to each other at the office.

Muhammad Shafee had a family function yesterday, which was attended by his sister-in-law.

As such, health officials have instructed the defence team to quarantine themselves, said Noor Farhah.

He said that without these two letters, “I don’t see why the trial should not continue [today].”

“It seems that the spread of the virus is faster than the progress of this trial,” Justice Sequerah quipped.

Sirim, in a statement on Wednesday, confirmed that one of its employees based at its headquarters in Shah Alam, has been tested positive for Covid-19.

The company has activated appropriate public safety measures to mitigate any potential risks of the virus from spreading further, it said.

Sirim said all employees who were in close contact with the infected staff had undergone screenings and tests and were put under self-quarantine for 14 days.

In the 1MDB-Tanore trial, Najib is facing four counts of using his position to obtain bribes totalling RM2.3 billion from 1MDB funds and 21 charges of money laundering involving RM4.3 billion.