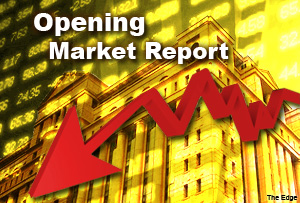 This is the second consecutive quarter of GDP contraction in Japan, the world's third-largest economy.

Last Friday, the KLCI fell 2.02 points or 0.11% to close at 1,813.79. Today, analysts said the KLCI's substantial decline this month had led to expectation of a techical rebound in the index.

"Potential mild rebound this week," Foo wrote in a note.

Reuters reported that Japanese stocks slipped on Monday and the yen stumbled to a fresh seven-year low against the dollar after data showed Japan's GDP unexpectedly shrank in the third quarter, throwing the world's third-biggest economy into recession.

Gross domestic product contracted an annualised 1.6 percent, compared with a 2.1 percent increase forecast by economists in a Reuters poll. That followed a revised 7.3 percent contraction in the second quarter, which was the biggest slump since the March 2011 earthquake and tsunami, Cabinet Office data showed on Monday.