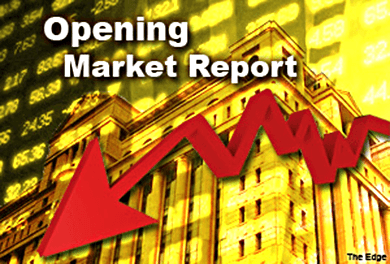 Regionally, oil prices fell more than two percent to 5 1/2-year lows early on Monday on concerns about supply glut and slower global growth, feeding fears for energy and commodities producers and exporters, according to Reuters.

Investors are nervous after U.S. shares posted their biggest weekly fall in 2 1/2-years last week on losses led by energy sector and as they expect the U.S. Federal Reserve to hint this week it is getting closer to raising interest rates, it said.

It said China's industrial output grew by a less-thanexpected 7.2% in November from a year ago, but retail sales rose 11.7%, beating forecasts.

The research house said that locally, the FBM KLCI closed down nearly 12 points as oil and gas stocks especially SapuraKencana Petroleum continued to be hammered by fund selling and the 30-stock index was down nearly 88 points since end-November.

“We expect the local market to trade sideways with the index hovering in the region of 1,725-40,” it said.