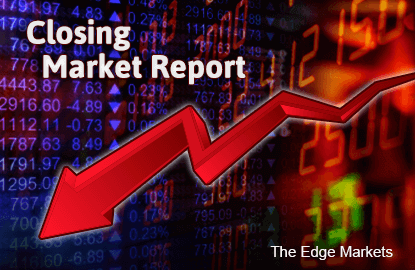 Reuters reported that Asian stocks slid to their lowest level in nearly three weeks on Monday, as profit-taking set in after soft Chinese factory surveys and US consumer spending data raised concerns over the global economic outlook.

A reading below 50 points indicates a contraction.

"Most of the bigger share markets in Asia are down, including the Nikkei, Hang Seng and the Straits Times Index. The only markets bucking the trend are the South Korean and Taiwanese markets.

"Besides that (China), the US markets had also closed lower last Friday, setting the tone for the weaker performance in markets today," Pong said.

For Bursa Malaysia, Pong said the disparity between trading volume and value showed penny stocks were in play today. The FBM Small Cap Index rose 57.54 points or 0.37% to close at 15,741.50.

The leading gainer was Lay Hong Bhd while the top decliner was British American Tobacco (M) Bhd. The top-active counter was XOX Bhd.