KLCI to trend higher in line with global equities 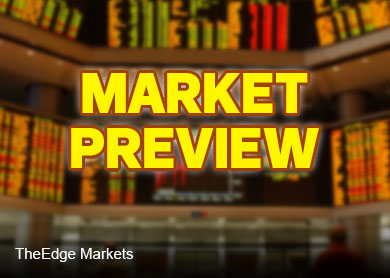 KUALA LUMPUR (Nov 25): The FBM KLCI is likely to trend higher today in line with global equities and extend its gains.

World equities markets and the euro rose on Monday amid merger activity and signals that central banks are willing to step further into the economic breach to support growth and inflation, according to Reuters.

The dollar weakened and oil prices held steady, with Brent staying above $80 a barrel, it said.

AllianceDBS Research in its evening edition Monday said that despite the last Friday’s down close, the FBM KLCI had on Nov 24 bounced back strongly to settle at the day’s high of 1,833.77 (+24.64, 1.36%) as market participants changed their game play from selling to buying.

The research house said that in the broader market, gainers outnumbered losers with 510 stocks ending higher and 297 stocks finishing lower.

That gave a market breadth of 1.71 indicating the bulls were in control, it said.

AllianceDBS Research said that having stayed in the red for 2 consecutive days, the benchmark index ended green on Nov 24.

It said the higher low and higher high on Nov 24 indicated that buyers were in control of the game.

“Following the strong up close with a settlement above the 1,830 level, the benchmark index is expected to trade higher again,” it said.

AllianceDBS said while an initial shift of market reversal was seen shaping up, it expects market volatility to remain high as both the sellers and buyers would continue to exchange their stock positions in attempt to win a firmer control of the game play.

It said an ability of the benchmark index to close above the 1,830 level for 3 days in a row would pave the way upward with next overhead resistance pegged at 1,860.

“The analysis of overall market action on Nov 24 revealed that buying power was stronger than selling pressure.